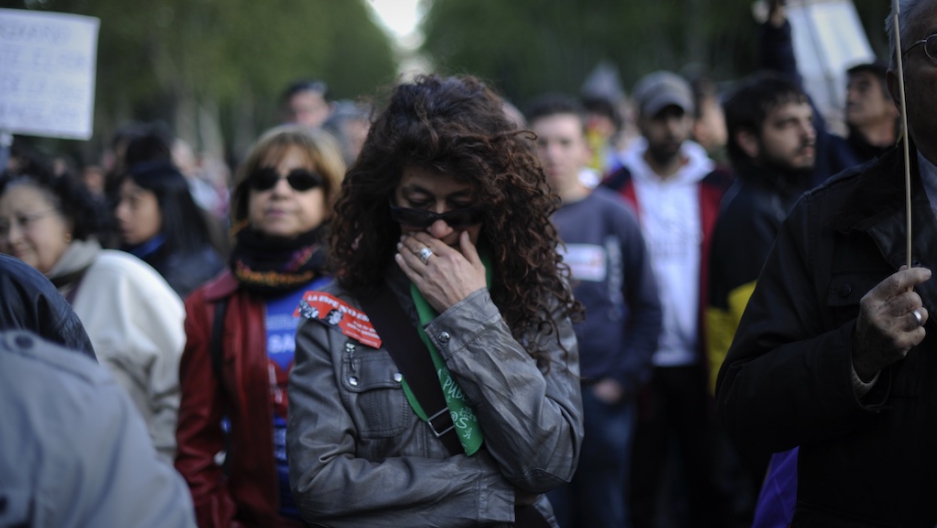 Protesters attend a rally against financial cuts in health and education in Madrid on April 15, 2012. Spain has nearly 50 percent unemployment for workers under 30.
Credit: PEDRO ARMESTRE
Share

In Ireland, the numbers are weird. Although official statistics show youth unemployment at 27 percent, the number should be significantly higher.

Why? Because so many unemployed youth have given up and are just living at home waiting for a job to come along, or they're "hiding out" in universities hoping the job market will get better after another degree. There is a "massive gap" between the predicted number of employable young people and those who are now being counted as unemployed, according to the International Labor Organization's (ILO) annual report on global youth unemployment issues [PDF].

Countries like Ireland aren't alone. As some analysts argue we're bouncing back from the past four years of economic slumber, but there's a very real effect of the Great Recession that many believe will have a lasting impact on the global psyche: there are very few jobs for young people. Anywhere. And many of them are looking for someone to blame.

The ILO puts the youth unemployment at 74.6 million people across the world, and next month, ahead of the annual labor conference in Geneva in June, the organization will host hundreds of young people for a forum on youth employment. Since March, the ILO has held events in 46 countries in the lead up to the May forum in an attempt to spread the word, raise awareness, and galvanize young people to find creative solutions to their particular crisis, which leaves some countries with close to 50 percent of youth without jobs.

“Young people everywhere deserve the power to get information, to connect and to ask hard questions – about justice, equality and opportunity," said UN Secretary General Ban Ki Moon earlier this month. "Our job is to listen to youth and answer their calls."

In an effort to get young people interested in working together with the ILO and the UN, the youth forum comes equipped with an active Facebook page called What About Young People? and a video contest through which youth can creatively voice their opinions and solutions for the unemployment problem. Winners can attend the forum in Geneva in May.

Reading through the posts on the Facebook page, watching the videos and reading the ILO annual report, another very obvious tie-up becomes clear — young people feel their governments aren't doing enough, and neither are corporations. Attempts to curb youth unemployment and find decent, paying jobs for recent graduates have not produced results thus far, and governments are going to need to work harder. Numbers for unemployment have climbed higher and faster since 2007.

"Political pressure to prevent the disheartening of a 'lost generation' is likely to increase over the short term and governments may be forced to shift priorities," says the ILO report. "Ideally, non-State actors, such as the private sector, trade unions and employers’ organizations, would also play more of an active role in addressing the youth employment challenge."

An example of how this can happen was voiced in one of the video submissions for the contest, as well as in a recent article in Time magazine, which described a symbiotic relationship between students working toward degrees and IBM's human resources department. Similarly, a video uploaded by user zach2anderson, suggests "corporate should join in the education system to get the required number of employees each year with specific number and quality" and that "governments should start providing resources to students and unemployed youth instead of selling those resources to corporate."

If some kind of change doesn't come quickly, and the voices and ideas of the youth are ignored by their governments, there could be a very real problem. The ILO report frames a coming global intellectual meltdown if something isn't done to save this generation's prospects:

"...it is not just the Middle East where young people are voicing their discontent. “Los indignados” in Spain spent much of the summer of 2011 peacefully protesting against high youth unemployment (an incredible 41.6 per cent in 2010). Discontented youth have also engaged in protests in other countries, notably Greece, Italy and the United Kingdom, with at times violent outcomes.

In some countries, youth are protesting with their feet. A recent report of the National Youth Council of Ireland noted that the number of people under 25 emigrating increased from 15,600 in 2004 to 30,000 in 2009. Increased crime rates in the some countries, increased drug use, moving back home with the parents, depression – all of these are common consequences for a generation of youth that, at best, has become disheartened about the future, and, at worst, has become angry and violent."

Here are some of my favorite submissions to the ILO Youth video contest: