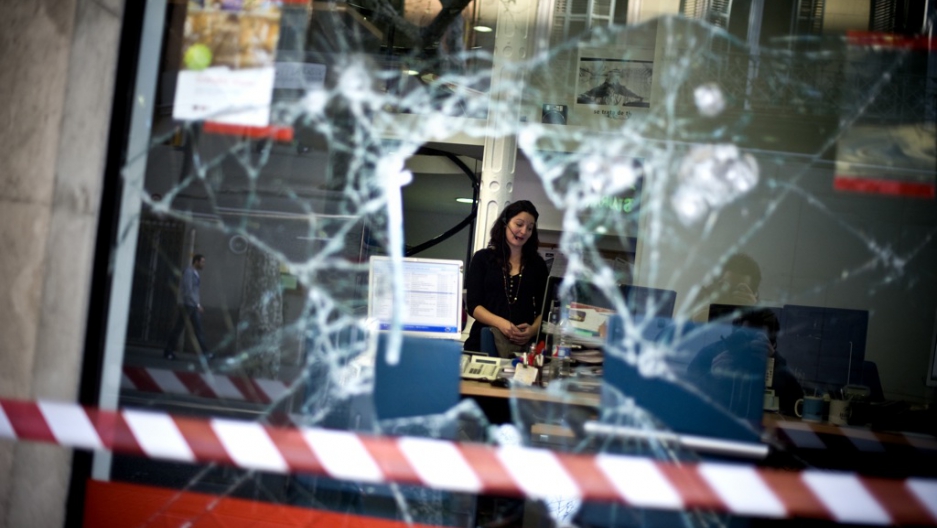 A Carslon Wagonlit Traves employee is seen through a broken window on March 30, 2012 in Barcelona, Spain. Protestors took to the street as the Spanish government prepared to approve a new austerity budget.
Credit: David Ramos
Share

Investors have been up in arms lately about Spain's burgeoning economic crisis.

The country's financial system has struggled under the weight of the a troubled real estate sector. While the government has backed efforts to consolidate Spain's many banks, it has yet to lead a universal bank bailout that would siphon taxpayer money into a financial sector backstop.

Even if the government made a political sacrifice to do so, liquidity and insolvency problems could threaten not only the financial system but the Spanish government's debt sustainability. And if European leaders force Spain's creditors to stomach losses on sovereign debt holdings, then it would likely start a panic that would cripple Italy and spread to across the eurozone, even to core countries like France, Austria, the Netherlands, and Germany.

At the same time, if EU leaders think they can bail out Spain convincingly enough to let it quickly return to the markets, then they won't adopt more activist policy to mend the eurozone's woes. This leaves us with one big question: are Europe's current firewall resources sufficient to bail out Spain? And about how much would this bailout cost anyway?

While autonomous regions are currently struggling to bring spending under control and the central government facing rising borrowing costs, the crux of the problem remains Spain's banks. Indeed, Spain's debt to GDP ratio was a tame 68.2 percent of GDP in 2011, so the central government could borrow significantly more if its banks were healthy.

According to analysts at Bank of America Merrill Lynch in a note out, €123 billion (or 84 percent) of €146.8 medium and long-term debt securities issued by banks were probably funded by cheap lending from the European Central Bank — in particular their two three-year long-term refinancing operations.

That said, these banks also need a total of €26.2 billion to meet the recapitalization guidelines set forth by the European Banking Authority late last year.

If deposits held reasonably steady but loan growth contracted by three to four percent under their base case, BAML analysts wrote, "[we foresee a] €49-57bn funding shortfall in 2012 for the banks under our coverage ... Note that we are not assuming [more] LTRO funding in this theoretical exercise."

Because of Spanish banks' heavy purchases of Spanish bonds in the wake of the ECB's long-term refinancing operations — Bank of America Merill Lynch analysts estimate that domestic government bonds now amount to €240 billion, or 6 percent of their assets — they will have more difficulty tapping the market for these funds.

At the same time, the Spanish economy is setting up for a sharp contraction. The government expects that it will contract at 1.7 percent this year, but Citi (among others) forecasts a much sharper slowdown, "a decline of around 2.7% in real GDP for 2012 and of 1.2% in 2013."

For that reason, it is highly likely more and more corporates and individuals will default on their loans. Spain recently forced banks to put provisions in place meant to guarantee losses on certain securities amounting to €50 billion, but BAML analysts believe that "€35bn of additional provisions for non-real estate related exposure and €6bn for performing exposure to RE and construction" will be needed in order to properly backstop non-performing assets.

All told, the €174 billion that the country might need to recapitalize its banks pales in comparison to the kind of money countries like Greece, Portugal, and Ireland have needed, relatively, to avoid default. Indeed, adding such a sum to Spain's current public debt would put the debt-to-GDP ratio at 80.5 percent, hardly an excessive debt statistic.

If this were all the money banks needed, then it is possible that Spain could effect this bank bailout without asking for international aid.

However, one of Spain's most troubling financial worries is not domestic. Many investors expect Portugal to either default or seek a substantial increase in financial assistance from the EU/ECB/IMF troika at some point next year.

EU leaders' decision to force private sector bondholders to default on their holdings of Greek debt earlier this year has many analysts convinced that officials will break their promises and allow the same thing to happen in Portugal. This would be a big shock to Spanish banks, which have some €78.8 billion in banking sector exposure to Portugal.

While not all of these funds would be completely depleted by a Portuguese debt restructuring, it is likely that Spanish banks would take a deep hit from the debt restructuring and would probably need more money to cleanse their balance sheets.

But to be cynical, let us consider that all of these assets needed to be backstopped. The resultant ~€250 billion necessary to recapitalize banks and protect against Portuguese losses would amount to 17.7 percent of Spain's GDP. However, even smaller write downs would render Spain's bank bailout spending a sizable portion of its GDP. No doubt in this case it would consider asking for outside assistance.

Even so, a Spanish bank bailout even of this size would be nothing like the aid Portugal or Ireland received when market funding dried up back in 2010. Each of these countries received a bailout equivalent to about 45 percent of their GDPs.

This reality reflects that which Citi economist Willem Buiter hinted at in a recent note on Spain:

Spain is likely, in our view, to be pushed into a troika (EC, ECB, IMF) programme of some kind during 2012, possibly by losing access to market funding on affordable terms, but more likely by the ECB making a programme for the Spanish sovereign a condition for continued willingness to fund the Spanish banks, which are currently the main buyers of newly issued Spanish sovereign debt.

Portugal would likely also receive more aid in the event of a second bailout. If Greece is any indication, then the country might need a sum about equal to the €111 billion it received the first time around, since any return to market funding would be questionable in the medium-term. That brings us to somewhere in the range of €350-370 billion, making a number of pretty rough but negative assumptions.

Let's recap with some numbers:

Come July, EU leaders will add some €500 billion ($657 billion) to the money already devoted to Irish, Greek, and Portuguese bailouts as part of the current, temporary EU bailout fund. That would more than cover the approximately €300 billion that we've discussed above, with room to spare in case the Spanish government became unable to access the markets.

Thus current levels of bailout aid while not barring Spain from the markets would probably be sufficient to address these particular shortfalls. Buiter suggests just this:

The existing and likely near future EFSF/ESM and IMF financial facilities are unlikely to be sufficient to both fund the Spanish sovereign fully and leave enough financial ammunition in reserve to deal with possible sovereign financial emergencies in Italy or in the ‘soft-core’ of the euro area.The Spanish sovereign would therefore likely continue to fund itself at least partly in the markets even if it comes under a programme. To ensure market access by the Spanish sovereign, the same combination of cheap ECB funding for periphery banks and financial repression of periphery banks by their national authorities that has been effective in lowering sovereign yields since the first LTRO is likely to be required.

The problem, however, is that the numbers matter less than fear itself. Despite its recent return to EU leaders' good graces, Italy and its banks continue to suffer from market angst. Although analysts have argued that Italy — which has promised a balanced budget this year and budget surplus next year — will be likely to sustain paying higher borrowing costs for longer than Spain can, the fragility of Italy's banks and speculation against them in the markets could make Italy's debt problems self-reinforcing.

While Italian banks do not teeter as close to the edge as do Spanish ones, they too have been responsible for absorbing much of the debt issued by Italy in the wake of the LTROs. It seems unlikely that investors would speculate so strongly against Spain without doing so against Italy, too, something we have seen reflected in the yields on 10-year government bonds lately: Spanish 10-year bonds (red) have risen steadily over the last three months, despite the effects of the LTRO, while Italian yields (green) remain below earlier highs. [Measured in percentage change.] In the last month, however, yields on 10-year bonds for Italy (green) and Spain (red) have risen in tandem. [Measured in percentage change.]

EU leaders are not wrong when they say that they have sufficient funding to backstop a country like Spain should it come under fire. However, if Italy were to follow Spain into the fire, those resources that were sufficient before might no longer be enough; the Italian economy is even larger than the Spanish one, and will probably require more money absolutely (though perhaps less relatively) to stay out of trouble.

Europe has adequate funds at its disposal to bail Spain out from its current predicament—banking failure—so there is little reason to believe that it will suddenly cause the the eurozone to collapse. However, bailout funding offers little safety for those thinking ahead to the political and fiscal future of the eurozone, and current bailout procedures provide little breathing room for all not going according to plan.

N.B.—This report was based on the calculations of a few investment banks and some rather broad assumptions. It is meant to provide a general idea rather than exact number for the funding Spain would need in a bailout situation, and ignores some important risk factors in its assessment—it assumes the problems of Spain's autonomous communities and political protests will be contained, for instance.

GOLDMAN PRESENTS: 4 Reasons We Won't See A Repeat Of Last Fall In Europe

This Was The Chart That Predicted Apple's Demise

How This Family Raised 19 Kids Without Going Into Debt

The Women Of Bloomberg TV