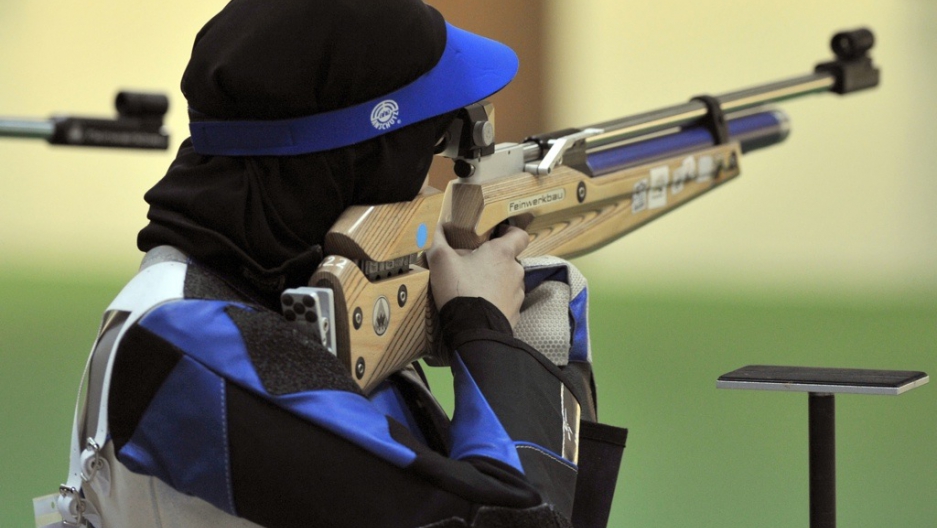 Kuwaiti Ayat al-Duwaikhi competes in the women's air rifle competition at the Lusail Shooting Complex in Doha during the 2011 Arab Games in Qatar on December 11, 2011.
Credit: Fayez Nureldine
Share

DOHA, Qatar — Gulf heavyweight Saudi Arabia and its feisty little neighbor Qatar are at odds over recent calls to include female competitors on their Olympic teams.

Previously both countries — and Brunei — had only sent male competitors to the quadrennial event. But after an outcry from leading human rights groups, the International Olympic Committee asked the three nations to include at least one woman in their official delegations.

While Saudi Olympic Committee President Prince Nawaf Bin-Faisal, a member of the royal family and the country’s sports minister, said he does “not approve” of sending female athletes to the London Games, Qatari officials are working overtime to reverse the perception of gender bias.

“Qatar offers an interesting parallel of what’s happening in Saudi Arabia,” said Middle East expert Christopher Davidson. “Qatar is carefully positioning itself as a different entity than Saudi Arabia. A slightly dangerous game given that Saudi’s at its doorstep. The female athletes issue is another great opportunity for Qatar to create a lot of distance between its society and political culture and the Saudi one.”

The tiny Gulf nation is making greater female participation in sports the focal point of its own pitch to host the 2020 Olympic and Paralympic Games.

“Hosting the Games in Doha will have enormous and positive social ramifications in a region of the world where gender empowerment remains a challenge in some areas,” according to the bid application Qatar submitted in February. “Breaking down barriers and creating new opportunities for women in sports and through sports also opens the way to equality in other aspects of life. The 2020 Games in Doha will nurture, advance and accelerate this progress exponentially.”

This will be the oil-rich nation’s second successive bid to host the global event, after it failed to make the cut for the 2016 Games. A woman, Noora Al Mannai, the chief executive of the Doha 2020 leadership team, is leading the new effort.

Meanwhile, Qatar has introduced physical education programs for girls in many schools around Doha, and has sponsored promising young female athletes to travel to the United States, Europe and elsewhere for expert instruction. The government also plans to construct a high-performance training center for female athletes in Doha.

“We are organizing many sports management courses, technical courses every year and sending many ladies to attend women's conferences and workshops to gain knowledge,” said Ahlam Almana, president of the Qatar Women’s Sports Committee.

The International Olympic Committee (IOC) will announce the shortlist of candidate cities bidding to host the 2020 games in May.

While skeptical of Doha’s chances, Davidson said the bid provided an opportunity for Qatar to continue to establish itself on the international stage.

“I suspect the Olympic bid is more a branding exercise than anything else. It’s more part of Qatar’s overall soft power push — and of course female athletes fit into that,” he said.

The IOC has already handed Qatar three wild cards this year for female athletes, which made swimmer Nada Arkaji, air rifle shooter Bahia Al-Hamad and sprinter Noor al-Malki eligible for London. Wild cards are invitations granted by the IOC for athletes who may not meet the international qualifying standards.

These three will join other female athletes from neighboring Kuwait, Bahrain and the United Arab Emirates, which have sent women to compete in past games. Defying Saudi Arabia, these Gulf countries have taken the lead in the greater Middle East by encouraging women’s participation in sports.

In February, female athletes from 11 countries throughout the region competed in the first Arab Women Sports Tournament at the Sharjah Ladies Club in the United Arab Emirates.

“We didn't know that this tournament had been the dream of many Arab women in the region,” said Noura Al Noman, the president of the Higher Organizing Committee for the Women’s Arab Clubs.

After the success of the initial tournament, Al Noman said the competition would now be held every two years and include at least five different sporting events, including basketball, volleyball, track, shooting and table tennis.

The Asian Games in 2006 provided the first real opportunity for Gulf women to participate in a large-scale sport competition. That participation has increased in recent years, along with a solid showing in the inaugural 2010 Youth Olympic Games in Singapore and the Arab Games in Doha last December.

But large-scale events can often overshadow the personal burdens facing individual athletes, who may have more support from the government than from conservative family members and society as a whole.

“The sports culture is not highly present yet for men, let alone for women. That doesn’t mean that women have to wait for men, it just shows that the society needs more maturity in this matter,” said Lulwa Al Ayoub, a professional fencer from Kuwait.

“Society, in general … needs more time to accept the role of sport in their daughters lives as … more than just a hobby and a mere waste of spare time.”

When Lulwa and her sister Balsam took up fencing in 1995, they couldn’t have imagined where it would take them. Lulwa scored a bronze medal in the Fencing World Cup, and Balsam took home a silver medal in the Asian Games.

The sisters organized the first amateur fencing competition for women in Kuwait, and have also coached and mentored young girls to follow in their footsteps.

Basketball has become a popular sport for young women in Qatar, but that too has its skeptics.

“Having started at a young age playing basketball, I did not face many tribulations. However, it became harder during my high school years as there were restraints from my school not allowing the girls basketball team to travel abroad to participate in tournaments due to ‘religious reasons,’” said Danah Dehdary, a senior at Georgetown University’s School of Foreign Service in Qatar. “I also faced some resistance from some family members as they felt that basketball was not going to directly help me with my academics.”

Dehdary’s struggle reflects a larger conflict that Qatari officials have tried to downplay.

“One thing that has been missing from most reports on Qatar is the sense of the struggle within Qatar itself — there are conservative conflicts over alcohol and a few other matters,” Davidson said. “The recently imposed partial alcohol ban is not really a good sign if you’re going to be hosting the World Cup [in 2022]. And it’s not good for tourism in the short-term either.”

“So we get these hints from time to time that the emir is having to balance these different elements within his own country,” Davidson said, adding: “But my sense in Qatar is that the conservatives are not fundamentalists like they are in Saudi Arabia. They are just Qatari citizens who don’t want their country to end up like Dubai.”

With Qatar and its other neighbors pushing for change, it’s doubtful Saudi Arabia will be able to restrict female participation in athletics for much longer.

“Whether or not the Gulf hosts these international events, the change is coming,” said Christoph Wilcke, a senior researcher on the Middle East at Human Rights Watch whose report on Saudi restrictions prompted the IOC to push for change.

“The spectacle and the economics of sport and the whole televised imagery of sport has already come to the region with force thanks to Al Jazeera English and other satellite channels with significant sports programming.”