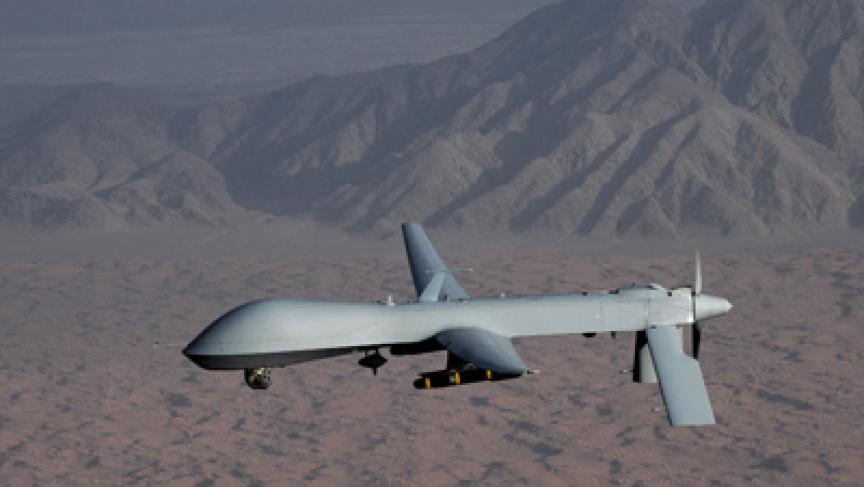 An American Predator drone flies in this undated photo. Pakistan is building its own fleet of military dones. (Photo courtesy of U.S. Department of Defense.)

Pakistanis have routinely complained about American drone strikes inside their country’s borders.

Pakistan says it has asked the U.S. more than once to equip it with Predator drones, arguing it can do a better job of targeting insurgents and the Taliban.

But it says those requests have been turned down. Now, the Pakistanis are building an attack drone on home soil with foreign help.

In the fractious atmosphere of Pakistani politics where everybody appears to disagree on just about everything one issue unifies everyone: U.S. drone strikes.

American drones firing on targets inside Pakistan’s borders have sparked anger and indignation, but observers say some in the military are also upset because the U.S. refuses to share its Predator technology.

Retired Gen. Talat Masood said that may be understandable from a strategic point of view — but it isn’t helping improve relations between the two countries.

“I think the most insulting part has been the unilateral use of the drones rather than not supplying us with the weapons system,” Masood said. “One country has that option of not providing a weapons system to another. But then using that weapon system against an ally. That becomes a very, very complex issue. Even if there are certain tactical advantages of using drones in Pakistan.”

Reports of Pakistan working to produce its own drones began to surface in 2009. The most highly touted model is called the “Burraq,” named for a mythical winged creature that is said to have carried the Prophet Muhammed.

Masood said the military is working hard on it, but there’s no guarantee it will be flying anytime soon.

In fact, Pakistan already has a long history of designing and producing drones, many of them created by a man named Raja Sabri Khan.

His near obsession with unmanned aircraft started at a young age. Khan found himself compelled to do whatever it took to fund his research.

“I augmented my nonexistent earnings by teaching physics and doing fashion photography so these helped Pakistan’s first drones to be created,” Khan said.

His clear preference for model aircraft over fashion models carried Khan to the top of his industry. In fact, he said he’s sold his unarmed drones to a company he does not want to name in the United States.

Khan said the drones flying in American airspace are being used for law enforcement, security and even search and rescue. The FAA prohibits the use of unmanned aerial vehicles in U.S. airspace, so it's not clear exactly how his drones could be flying in the United States. If they are, it's probably not entirely above board.

But he is adamantly opposed to arming drones because of the risk that innocent people will be harmed.

Still, Khan expects Pakistan’s political and military leaders will push ahead, seeing a missile-firing drone as nothing more than the latest airborne weapon of war.

“I feel bombing civilians is unfair,” he said. “It’s something that cannot be condoned. But at the same time, a drone is nothing more than an aircraft without a pilot (on board). And if you use it to fight a war, I think political considerations far outweigh the idealistic side of the issue.”

There is another potential side effect of Pakistan’s determination to manufacture its own drone fleet. Masood said China has become a key partner in the development of the Burraq drone.

Masood said the U.S., which has cooperated with the Pakistani military on joint projects and training for years, should be paying attention.

“You can see how lasting those bonds are. And any country which has a defense relationship, which is strong and binding, then the relationship also becomes very lasting,” he said.