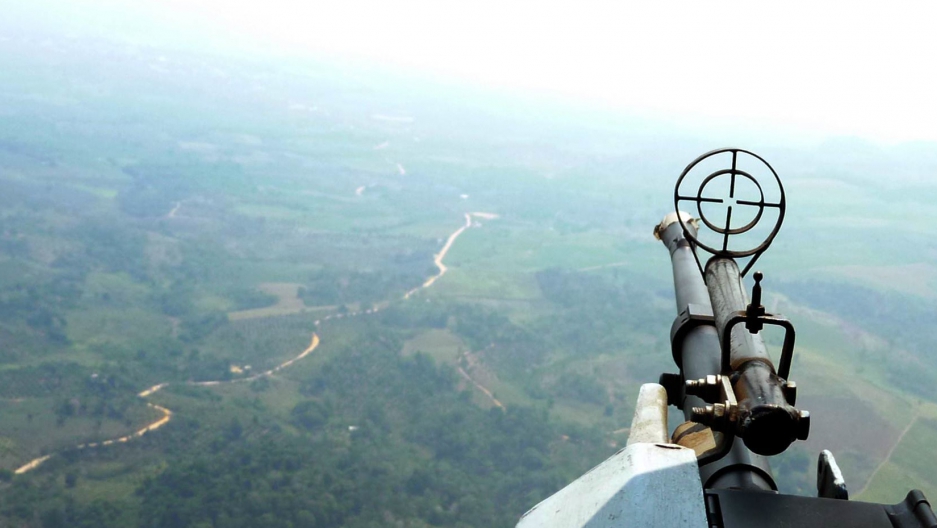 Counter-drug forces fly over the Peruvian rain forest, where farmers grow coca leaves — used to produce cocaine and crack, and whose leaves are chewed and brewed into tea by the locals.
Credit: CARLOS MANDUJANO
Share

LIMA, Peru — This weekend, heads of state at the Summit of the Americas are expected to discuss the emerging Latin American consensus for an alternative to the “war on drugs.” Many leaders are fed up with the violence, and highlight how it has even failed to stop rising demand in the US and their own countries for cocaine and other illegal highs.

Yet one key country continues to back Washington’s prohibitionist approach to narcotics: Peru.

According to the most recent United Nations statistics, this Andean nation is on the point of overtaking Colombia as the world’s No. 1 grower of coca, the main ingredient in cocaine and crack.

Thousands of impoverished farmers depend on the crop for a modest cash income of a few hundred dollars a year. Meanwhile, the violence that has long plagued the remote, rugged cloud forests where the plant is traditionally grown is increasingly spilling onto the streets of the capital, Lima.

Yet despite briefly flirting with a new approach, President Ollanta Humala — a former army officer who once commanded a garrison in a coca-growing region — has privately ruled out legalizing cocaine production or consumption, according to Ricardo Soberon, his former anti-drugs czar.

Soberon headed the government agency charged with combating illegal drugs — the National Council for the Development of Life without Drugs (or DEVIDA by its Spanish initials) — but his tenure only lasted five months. Having spent two decades as a narcotics analyst, including providing advice to coca growers’ organizations, he adopted a softer approach.

“I knew legalization was not an option so I focused on other areas,” says Soberon. He opted for the “reduction” of coca crops rather than “eradication.” In practice, that meant broadening the approach from soldiers searching for and destroying coca plants to helping impoverished growers switch to alternative crops. Soberon also targeted the chemical ingredients and money laundering that are key to the drugs trade.

According to the most recent UN statistics, in 2010, Peru had a total of 61,200 hectares (over 150,000 acres) dedicated to growing coca, just 800 behind Colombia. Significantly, the Peru figure represents an almost 50 percent rise in the previous five years, while the Colombian number is actually down by a third over the same period.

Soberon's approach wasn’t popular among conservative media and politicians, who attacked him for allegedly sympathizing with the coca growers. The US ambassador in Lima, Rose Likins, bypassed him in her contacts with the Peruvian government. He was removed from DEVIDA as part of a major cabinet reshuffle in December.

Since 2003, Peru has had a law on the statute books that decriminalizes possession of small amounts of cocaine and marijuana for personal use. However, both police and the public here appear unaware of legislation, and officers continue to arrest people for using those drugs.

Peru’s stance was recently summed up by Defense Minister Alberto Otarola, at a meeting of the Washington, DC think-tank Inter-American Dialogue, where he said the “frontal combat against drug trafficking dominates” Peruvian national security thinking.

“Humala’s fundamental problem is that he thinks the military clearly understands the narco-traffickers, when they do not,” says Soberon, a stocky, graying man in the cramped office of the Lima-based Drugs and Human Rights Research Center (CIDDH by its Spanish initials) where he now works.

Latin American leaders, including the presidents of Colombia, Guatemala and Mexico, have called for debate about legalizing and regulating aspects of drug production, trade or use. The push has gained unprecedented support in the lead-up to this weekend’s Summit of the Americas in Cartagena, Colombia, although the topic is not officially on agenda.

“The position of Peru will be very difficult to anticipate before the event,” Soberon says.

“It is a very sensitive issue and there is already a prejudice, of the president himself … [the Humala administration] are surely going to have a very typical position, of a direct fight with the drugs trade. But I hope and believe that there is still space to convince them regarding the need to at least have the debate.”

As he talks, Soberon chews a fat wad of coca leaves. “It helps me work,” he says of the habit, which is legal and widespread in Peru. It provides a mild buzz, similar to an espresso, and alleviates the symptoms of altitude sickness, not to mention a hangover, headache, tiredness and even menstrual pains.

Andeans have indulged in it since long before white people arrived in the region, and few here accept its stigmatization as a result of the havoc wrought by the modern, Western inventions of heavily processed cocaine and crack.

Soberon now argues for subsidies and tax breaks to encourage alternative crops such as coffee or cacao. And with the drugs research center, he is working to introduce stevia, the natural, spectacularly sweet alternative to sugar, as a new crop.

He also believes the Peruvian government needs to make a greater effort to integrate rural communities into Peru’s dramatic economic growth, including more schools and better medical attention in the Andes.

In Aucayacu, one of the main coca-growing areas, some 400 miles east of Lima, in a typical high-school class of 120, just two will ever make it to university, says Soberon.

And most of the other top-performing students will end up either sucked into the drug trade, prostitution or some form of dead-end work such as driving a moto-taxi.

“That has to change,” he says.