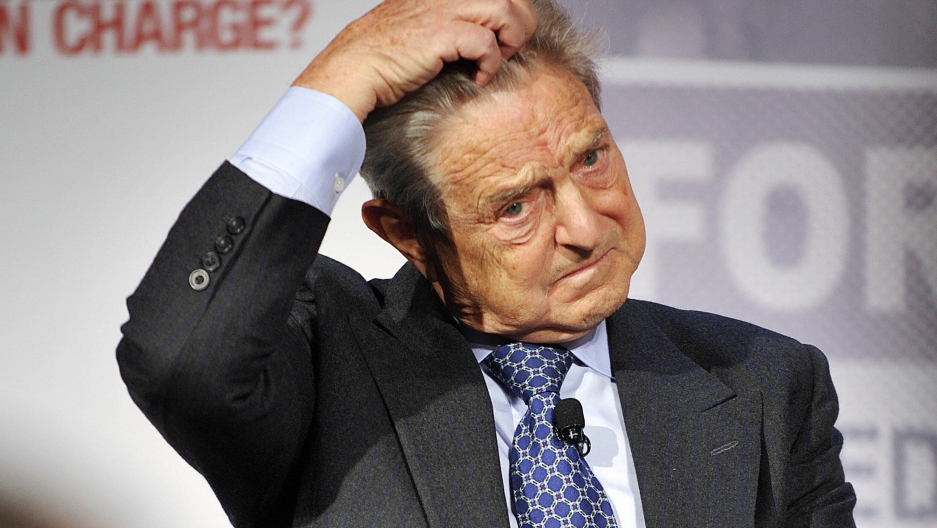 This guy, George Soros, calling the shots in the White House — oh really? Makes you want to scratch your head, too. But Megadeth's guitarist and many other Americans seem to think the liberal billionaire is — as Glenn Beck put it — the “Puppet Master.”
Credit: FABRICE COFFRINI
Share

MALVERN, Pa — The green, rolling hills of Chester County stretch for miles, perfectly manicured lawns alternating with imposing houses of stone or brick set well back from the country roads that wind through the area. I am just an hour or so from Philadelphia, but it feels like a chasm of both space and time separate me from the City of Brotherly Love.

People who live out here keep horses, have groundskeepers, and send their children to private schools where the fees are higher than the average college tuition. Their yearly income is measured in more zeroes than I can easily count, and derives mainly from business begun by their parents or grandparents in a much more optimistic era.

Life is gracious in Chester County, as are the natives. They have social consciences and raise money for good causes. Most are well educated and widely read, and cocktail party chatter is a cut or two above the ordinary. There is little of the general defeatism and malaise I see in more ordinary venues.

One friend who was born and raised here calls it “La-La Land,” with equal parts of exasperation and affection. There does seem to be a nimbus around the place, isolating and protecting it from coarser realities.

More from Highway 2012: Long and winding road to elections

At a recent gathering, I was trying to sound out my fellow partygoers about the political scene. They were much more interested in planning family reunions in the Bahamas, opening the summer home in New Hampshire, or organizing a grant competition for underprivileged girls.

I drifted from group to group, looking for a fellow political junkie. I soon found one, a fundraiser and consultant whom, for the sake of simplicity, we’ll call “John.” He is well connected in Democratic circles, and was speaking off the record.

“It’s all over,” said John. “You have a bad campaigner, Romney, running against Obama, who is a professional. No one is taking it all that seriously. The real fight will be for the House and Senate. The Democrats are throwing everything they have at those races. They know they cannot govern unless they have control of Congress.”

I spoke to several people who all said more or less the same thing.

I was a bit surprised — I had assumed that, based on bank balances alone, I was in Romney country. But this crew seemed to be Obama all the way.

Then I ran into Nana May. I am not sure whose nana she was, but the sobriquet seemed to fit. She is a lively and engaging woman who is most likely approaching 80, although she seems to have the energy of a 30-year-old. We admired each other’s outfits, then got down to business. Nana May’s view on politics was quite different from John’s.

“I don’t trust Romney for a minute,” she said, sipping white wine. “He’ll say whatever he thinks will get him elected. But I’ll support anyone who isn’t Obama.”

She leaned a bit closer and said, “Obama is just a marionette controlled by George Soros, the liberal billionaire. He was born in Hungary, you know. I do not want George Soros controlling the United States. Or the world.”

Goodness. Of all the things I had forgotten to worry about, the possibility of George Soros taking over the world was not even in the top 10. But I’ve been out of the country for a while, so maybe I just missed it?

More from Highway 2012: Alice in Southernland — going mad as a hatter south of the Mason-Dixon line

I decided to do a bit of investigating. Nana May might be on to something — the internet is full of the whole Obama-Soros connection.

For just $10.87 I can buy a copy of “The Shadow Party: How George Soros, Hillary Clinton, and Sixties Radicals Seized Control of the Democratic Party,” by David Horowitz and Richard Poe.

The book’s blurb sent shivers up my spine:

“America is under attack. Its institutions and values are under daily assault. But the principal culprits are not foreign terrorists. They are influential and powerful Americans secretly stirring up disunion and disloyalty in the shifting shadows of the Democratic Party.”

OK, now I get it: The problems I have been seeing — the frustration with the poor economy, the anger over education and health care, the desperation at unemployment and even the growing annoyance at the government’s lack of performance were not sparked by reality at all. Instead, these emotions have all been stirred up by the Democrats, who, we are told a bit further on, “seek to undermine the war on terror, destabilize the nation, and effect radical ‘regime change’ in America.”

Glenn Beck, the eminent conservative commentator, has called George Soros the “Puppet Master,” and suggested that the billionaire is on a quest to undermine the United States. Of course, Beck has been in hot water for, among other things, calling Obama a “racist” and equating the views of Reform Jewish rabbis to “radicalized Muslims.”

I’m not sure his is the path I want to follow.

It seems that even Megadeth guitarist Dave Mustaine has called Soros “Obama’s mentor,” along with saying he “knows” that Obama was born “somewhere else than in America.” Mustaine did, however, confess that he has some health problems caused by head-banging, so he might not be the best source of information, either.

But birther head-bangers, right-wing media stars, conservative authors, and Nana May all agree. How can I hold out?

Maybe I need a worldview adjustment. Or maybe I just need to get out of La-La Land.