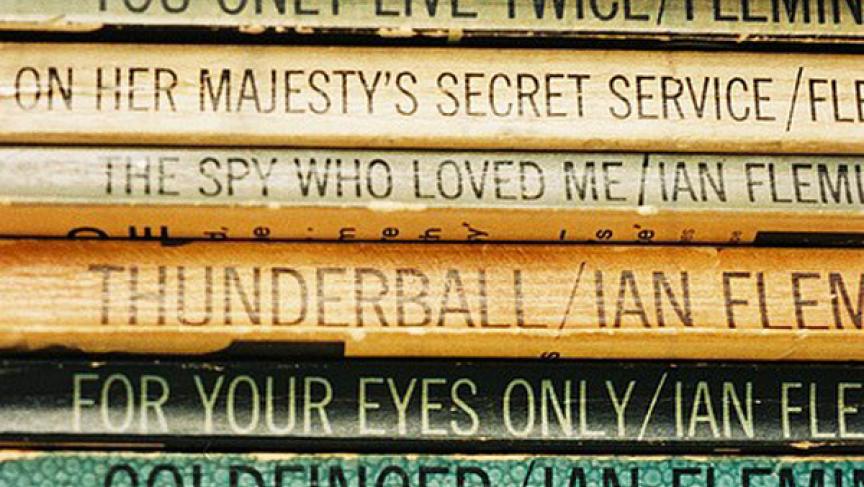 A selection of Ian Fleming's James Bond novels, published from 1953 to Fleming's death in 1964. (Photo by SchroCat via Wikimedia Commons.)

Author Ian Fleming died in 1964, but his James Bond character lives on in popular imagination and through the hugely successful Bond movie franchise.

In recent years, Ian Fleming’s estate has commissioned new 007 novels, first by writer Sebastian Faulks in 2008 and then by Jeffrey Deaver in 2011. Now the latest to get the Bond assignment is best-selling British author, William Boyd.

Boyd’s task is a daunting one: as soon as you hear the words “James Bond,” clichés come to mind. First there’s the Bond music, and then the many famous catch-phrases, such as “Martini, shaken not stirred,” or “The name is Bond: James Bond”.

With all that literary and cultural baggage, some writers might not covet the assignment. But 60-year-old author William Boyd says he welcomes it.

“It’s a challenge, but a very exciting one,” he said on the BBC’s “Today” program. “I’m really looking forward to tackling it,” he said.

According to Boyd, he grew up reading Ian Fleming and is a big Bond fan. “I’ve had this odd obsession with Ian Fleming, I’ve written about him, I’ve put him in one of my novels.”

That novel was “Any Human Heart,” in which the real Fleming played a small but pivotal role in the life of the fictional Logan Mountstuart. Now, Boyd will get to write about Fleming’s fictional creation – and he acknowledges that there will be certain constraints.

“You’ve got to, as it were, tick the boxes of the Bond genre," he said.

On the other hand, Boyd says those constraints are not too onerous.

“You’ve actually got quite a free hand, I mean, you’re given the character, and there are certain givens about that character which you understand, otherwise you wouldn’t take on the job," he explained.

Jonny Geller is the literary agent for the Ian Fleming estate — and also, as it happens, William Boyd’s literary agent. He says it’s not just the previous books that present a challenge for Boyd, but rather, the global phenomenon that is Bond.

“The fascinating thing about the James Bond/Ian Fleming world,” Geller said, “is that there’s a large number of people who are kind of experts. You can find them on the Internet, on blog sites — they know a huge amount about each of the books and the story of Ian Fleming himself, so they’re quite an exacting audience.”

Still, both Boyd and his literary agent stress that this will be Boyd’s book, and that he’ll take it just as seriously as all his other novels.

“This is not a kind of Hollywood script re-write,” Geller said. “This is going to have William Boyd’s name on it, you know he wants it to be as good as the rest of his books. So, he’s also got to balance that with, ‘What is a James Bond novel?’”

Boyd said his novel will go back to classic Bond – it’ll be set in 1969, five years after Ian Fleming died. He says he’ll have to imagine what Fleming might have been writing about then, had he been alive.

“I was alive in 1969, so it’s a curious combination of my own personal memories of that period, and taking on the whole kind of cold war geopolitical setup, and having tremendous fun," he explained.

The new book won’t focus on special effects the way the Bond films have done, but instead will rely on strong storytelling.

“The films in a way rely on cars and guns and all that sort of thing,” Boyd said, “but in a novel, describing some elaborate gadget isn’t quite the same as seeing it on the screen. So you’re much better to fall back on story and character and various dilemmas that the hero finds himself in, than dressing it up with the latest high-tech available.”

The new novel will be out in 2013, to coincide with the 60th anniversary of the publication of “Casino Royale,” the very first Bond book.

Boyd said being asked to be a part of the Bond saga is "an honor."

“People of my age have grown up with Bond, and to suddenly find yourself actually asked to write a Bond novel, it’s kind of a dream come true," Boyd said.