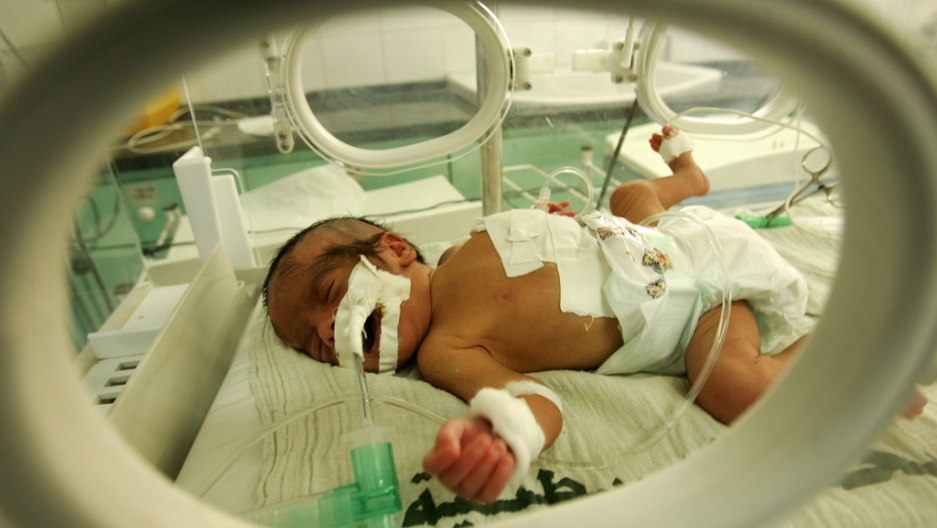 A premature newborn baby is cared for at the Neonatal unit at the Al-Shifa hospital in Gaza. Argentina's "miracle baby" is in critical condition after surviving in a morgue fridge for 12 hours.
Credit: Abid Katib
Share

Luz Milagros Veron, the Argentine "miracle baby" who survived for hours in a morgue fridge after mistakenly being declared stillborn, is in critical condition, CNN reported.

Doctors have detected an infection in the 9-day-old infant, whose name means "miracle light," and worry it could compromise Luz Milagros's neurological system and kidney function, local media reported Thursday, according to CNN.

Dr. Diana Vesco, chief of neonatology at the Perrando hospital in Resistencia, Argentina, told the Associated Press that the baby is on a ventilator and being treated with antibiotics.

Luz Milagros, who was born three months premature and was trapped in the morgue for almost 12 hours, faces a “risk of death commonly associated with her weight and gestational age at birth,” Dr. Vesco told the AP.

Five medical professionals who dealt with the baby at the hospital have been suspended as the state conducts an investigation, Chaco’s deputy health minister Rafael Sabatinelli told reporters on Tuesday.

"There was an error of medical protocol. This is about human error," said Francisco Baquero, Chaco province's health minister.

Jose Luis Meirino, the hospital’s medical director, told the AP that the girl was born “with no apparent vital signs.”

“About what happened afterward, we have no explanation,” he said.

Officials reportedly provided compensation to the family Thursday, including cell phones, an economic subsidy, a motorcycle and transportation assistance, according to CNN.

Luz Milagros' mother Analia Bouter told the AP she got a supportive call from President Cristina Fernandez, who asked to see the baby once she’s out of intensive care.

"Today is the eighth day of my daughter's resurrection," the girl's father, Fabian Veron, told CNN on Wednesday.