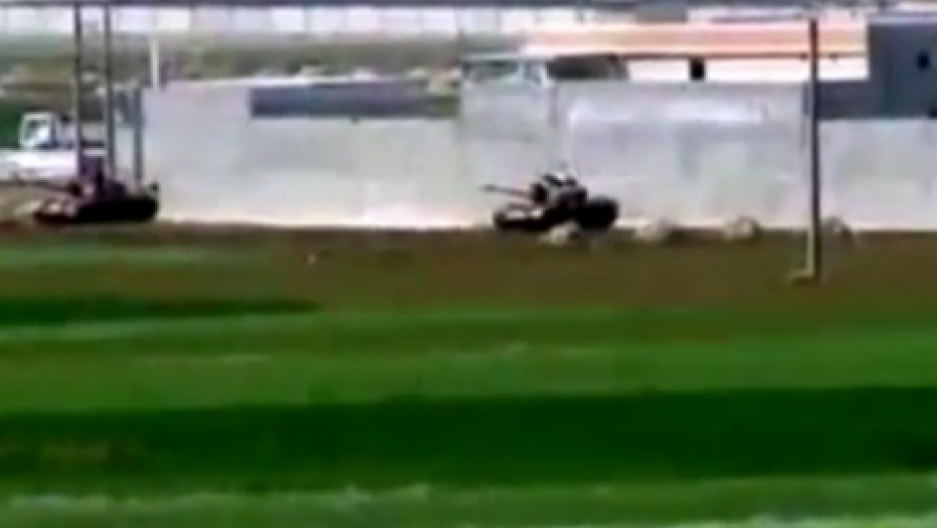 Syrian military forces remain inside the nation's cities, despite a U.N. peace plan calling for their withdrawal. A cease fire, though, seems to be holding. (Photo from Reuters video.)

A fragile ceasefire has been implemented — mostly — in Syria, though Western countries have expressed doubts about the government's willingness to stick to it.

Various media reports say the truce, negotiated by United Nations special envoy Kofi Annan appears to be holding, with no reports of casualties or deaths so far. The Syrian government and the armed opposition have both said they will abide by the ceasefire, but reserved the right to respond if attacked.

“I am encouraged by reports that the situation in Syria is relatively quiet and that the cessation of hostilities appears to be holding,” Annan said in a statement according to the New York Times. “Syria is apparently experiencing a rare moment of calm on the ground.”

Annan asked the U.N. Security Council to authorize deploying peacekeepers to Syria to observe and maintain the truce.

One U.N. diplomat in New York told the BBC there were plans to deploy a team of some 30 observers within the next 48 hours to see whether a full mission was feasible.

But not all points of the peace plan have been implemented, with rebels saying Syrian Army forces have not yet withdrawn from cities — and that was one of the six major points of the Annan plan.

"The Syrian Defense Ministry in Damascus, the capital, said a decision had been made to observe the cease-fire after government forces carried out 'successful missions in combating criminal acts by armed terrorist groups' — the term the authorities use to describe their armed adversaries, the Times wrote.

Some reports have emerged of isolated instance of the cease fire being broken. Syrian opposition officials said one man was shot at a checkpoint and Syrian officials said a roadside bomb killed one person and wounded 24 in Aleppo, according to the BBC.

The United Nations estimates that about 9,000 people have died in the violent crackdown that's lasted over a year now.