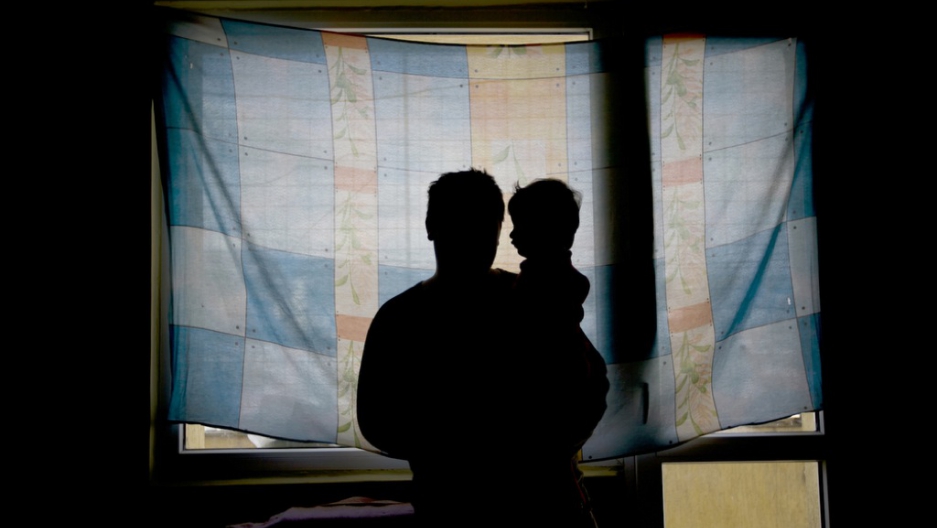 Mahmud, who is afraid being identified could endanger his family back in Idlib, Syria, holds his one and a half year-old daughter. He and his family fled the violence engulfing many parts of Syria. In Idlib, he says, each family has lost a son or a father.
Credit: Jodi Hilton
Share

SOFIA, Bulgaria — Sitting cross-legged on a worn mattress, his toddler clinging to him, Mahmud, 25, recalls his family’s escape from Idlib, Syria to Bulgaria. His wife, holding their five month-old baby, listens, her brown eyes and round face framed by a hijab.

He says that one day in Idilb, tanks rolled in, subjecting civilians to bombardment, arrests and torture. Gas and electricity cuts made it difficult to cook and keep warm. Snipers meant that they risked death by going out to buy food.

“We want our children to be able to sleep without the constant sounds of explosions [and] military aircraft,” he said. “Every family from our village has lost someone — a child, or husband. In our family, three of my father’s brothers were arrested and were never seen again.”

Now their home is a single room with a bunk bed, hot plate and adjacent bathroom in the decaying apartment block known as the "Reception Center" at the State Agency for Refugees on the outskirts of Sofia.

Over 30,000 Syrians have fled their country since the beginning of 2011. The fact that more than 100 of them have applied for asylum or humanitarian status here in Bulgaria — the poorest country in the European Union — is a testament to their desperation.

Bulgaria’s average income is $5,600. Its unemployment rate tops 11 percent. Since the end of communism, it has experienced significant emigration and very little immigration. And the Bulgarian asylum system is struggling to meet international and EU guidelines on the treatment of refugees — a fact that human-rights organizations are trying to change.

“We do have a very good argument on our side… on behalf of an asylum seeker so desperate to want to come to Bulgaria,” Iliana Savova, a lawyer with the Bulgarian Helsinki Committee.

Like other asylum-seekers, Syrians often find themselves entangled in a Kafkaesque bureaucratic procedure that provides little hope of normalization. Though more than 8,000 people have died in Syria since the crisis began over a year ago, according to the UN, Bulgaria is hesitating to recognize the existence of conflict in Syria. Despite widespread reports of violence and even accounts of children being tortured, Rumen Gelovski, director of the State Agency for Refugees, says “We have been waiting to receive official, objective information" on the situation.

Since 2011, seven Syrians have been granted humanitarian status, while 46 were rejected and 23 cases were otherwise closed — probably after the applicants left the country. The rest are waiting for their cases to be decided. In the meantime, they're left living in disquieting legal limbo.

Most are initially locked in detention centers for up to three months, despite international guidelines on the treatment of refugees, which state that those who flee religious, ethnic or political persecution should have the right to protection, even if they enter the EU illegally.

“The continued policy of the administration is to keep people in detention,” Savova says. They say there are not enough facilities to accommodate new arrivals despite the completion of a brand-new transit center for asylum-seekers after almost a decade of delays, she says. “Every administration finds excuses why it has not opened.”

Eventually, detainees are moved to a Sofia reception center where they submit their applications for asylum. There, they receive basic accommodation and a $45 monthly stipend for food. They have access to educational programs but are not permitted to work. "They remain in legal limbo," says Boris Cheshirkov of UNHCR in Bulgaria. "They are not able to return, but not able to be a fully functioning member of society”.

Once they run out of appeals, rejected asylum-seekers become illegal aliens. That means they need to either leave the country or risk being imprisoned in Busmansi, the Special Centre for the Temporary Accommodation of Foreigners, where undocumented migrants can be held, often indefinitely.

There have been cases were migrants were locked in Busmansi for six years, says Svetla Encheva, a refugee-rights activist in Bulgaria.

Others squat illegally or live on the streets, finding work wherever they can. “They don’t deport them, don’t legalize them… They just live like invisible people.”

Adnan Mahmud, 40, an English- and German-speaking pharmacist, father and Syrian Kurd, walked from Qamishli, Syria into Turkey. From there, he took a bus to the Bulgarian border, where he and his companions became lost in the woods for several days.

Border police found them, hungry and exhausted, and brought them to the detention facility at Lyubemits, where they remained for three months. Six months after applying for asylum, he received his denial, in which was written, “In Syrian there are no problems, the situation is calm.” His voice rises with resentment. "I don't have any way out,” he says. “I can't go back to Syria."

Another Syrian, Nadar Ahmed, 45, says that in Turkey, a smuggler told him his money was sufficient to go only as far as Bulgaria — “not enough to go to a better country." He sleeps in a bug-infested room with five other men, where the walls are stained from water damage and the bathroom stinks. He sees no chance of being granted asylum, nor can he return to his homeland.

“I am afraid, I am really afraid,” says Ahmed, “and now the situation is worse than when I left.”

Looking out the window, Mahmud says, "In the end, the answer will be rejection… According to the Bulgarian government, Syria is a safe land."