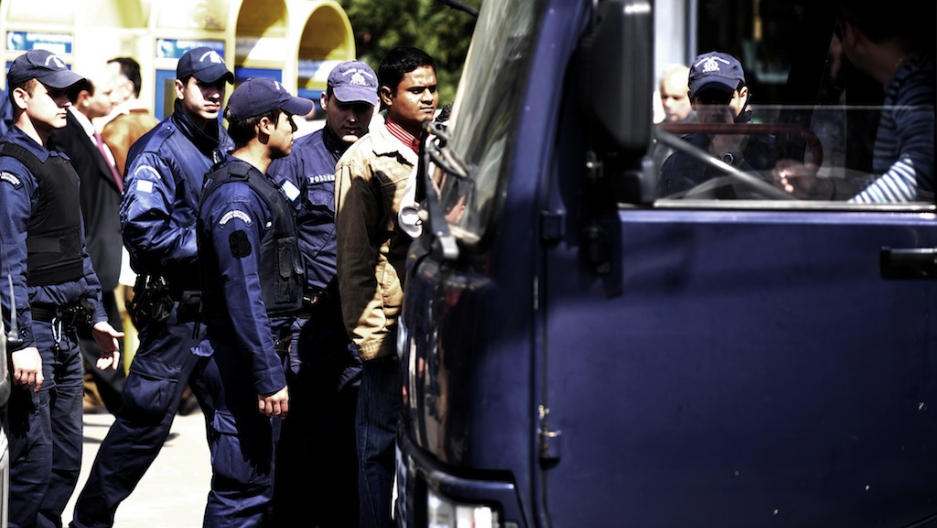 A detained immigrant waits to board a police bus in central Athens Omonia square area , during a police 'sweep' operation for the undocumented migrants and illegal street vendors on March 29, 2012 The police sweep was centered on Omonia Square, around which thousands of illegal migrants live.
Credit: LOUISA GOULIAMAKI
Share

Greece is planning to round-up and deport migrants and those seeking political asylum that are infected with HIV and other diseases, according to reports by human rights organization Amnesty International. They will be held in inhumane centers or transferred to hospitals where they will be held under police guard.

"These deeply alarming measures specifically target the most vulnerable people based on discriminatory criteria," said Amnesty's Jezerca Tigani. "The Greek authorities must withdraw such measures immediately, which will only exacerbate the stigmatization of migrants and asylum-seekers in the country."

There is no functional system for identifying Grecians with diseases. Instead, Greece plans to target individuals "based on their country of origin, poor living conditions, occupation as sex workers or their drug use," according to Amnesty, while the system for applying for political asylum is already backlogged with thousands of cases.

Because of the Dublin II agreement, European Union member countries can legally send migrants back to their country of entry. In many cases, that country is Greece, which adds to the overwhelming number of undocumented migrants waiting for action. But the government is unable to effectively handle the influx of people, some of whom are escaping toruture or sex trafficking, and others that are infected with diseases such as HIV.

A United Nations study [PDF] on the effects of Dublin II, which aimed originally to streamline the asylum process, found a number of shortcomings.  One of these is that a number of member states, including Greece, do not adhere to recommendations to not "remove an asylum-seeker before a full and fair examination of of his or her asylum claim has taken place." There is no legal obligation for member states to consider this recommendation, although the UN believes there should be.

Undocumented people face arrest in Athens if they are caught without papers, so many are confined to their homes for fear of deportation.

“I come every Saturday (to submit an asylum application) but nothing happens. Last week, they took no applications. I have no papers. (The police) see me on the road with a dark colour and ask if I have papers. I do not have any and then they arrest me. It is a big problem. Those who do not have papers are detained. I stay at home and sleep…," said one anonymous asylum-seeker.

"Immigration-related detention is used only a last resort, and arresting irregular migrants without seeking any alternative measures violates Greece’s international obligations," said Tigani. "It is especially concerning that those eligible for international protection also face being detained. Migrants and asylum-seekers are not criminals and should not be treated as such."