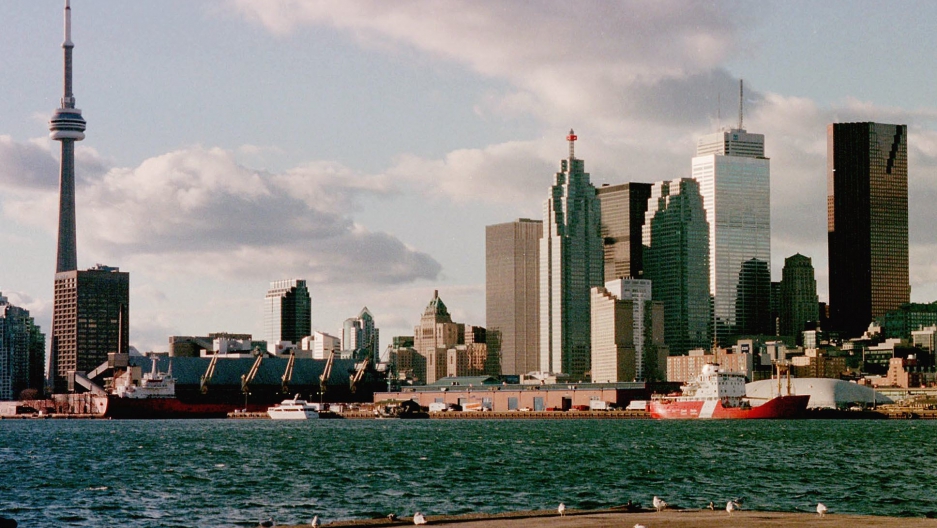 TORONTO, Canada — Lesley Sloan’s workdays at an office tower in north Toronto were marked by the chilling impact of birds against her sixth-floor window.

“I’ll never be able to remove the sound of the thuds from my head,” she told an Ontario court last week.

Sloan, an administrative assistant at Ricoh Canada, would see the macabre results at the start and end of her shift — scores of broken, feathered bodies at the foot of three office towers, which make up a complex called the Yonge Corporate Centre.

The complex is accused of being the most lethal for bird collisions in Toronto, killing or injuring more than 22,000 migratory birds from 2000 to 2010, according to FLAP, a non-profit group that has tracked bird collision deaths and injuries in the city since 1993.

That alleged lethal record has landed the giant property owner Cadillac Fairview Corp. in court, accused of breaking a federal law, the Species at Risk Act, and two provincial ones, the Environmental Protection Act and the Ontario Society for the Prevention of Cruelty to Animals Act. The company has pleaded not guilty to charges brought against it by the Canadian environmental group, Ecojustice.

In what observers believe could become a precedent-setting lawsuit, Ecojustice lawyer Albert Koehl alleges the birds are lured to their bone-crushing deaths by reflective panes of glass that cover the buildings from top to bottom. They mirror the sky and nearby trees, tricking birds into thinking they can fly right through, Koehl argues.

The case highlights what some ornithologists describe as a largely ignored carnage in North America.

In the United States, collisions with buildings kill an estimated 100 million to 1 billion birds annually, says Daniel Klem, a leading ornithologist at Muhlenberg College in Pennsylvania. By comparison, the 1989 Exxon Valdez oil spill in Alaska killed an estimated 100,000 to 300,000 birds.

“Yet the far greater toll by sheet glass largely goes unnoticed, ignored, or simply not understood by most professional and non-professional ornithologists and conservationists,” Klem writes.

“The conservation community simply must begin to address this enormous source of mortality in a much more active and effective way,” he adds. He notes that hundreds of millions more are killed each year in the US by habitat loss, pesticides, cats, hunters, cars and wind turbines.

(In her 2007 book “Silence of the Songbirds,” Toronto biologist Bridget Stutchbury outlines how the dramatic decline in songbirds — which disperse fruit seeds and protect crops and forests by eating bugs — threatens the ecosystem.)

Klem is an expert witness in the Yonge Corporate Centre case. He also testified in an earlier Ecojustice lawsuit on bird collisions — believed to be the first of its kind in Canada — against another Toronto office complex and property owner in the city’s east end. That ruling is expected in November.

FLAP estimates that at least 1 million birds die from building collisions each year in Toronto, which sits on a busy migratory route. Since 1993, FLAP volunteers have recovered more than 54,000 birds at the foot of 172 buildings. (Toronto has more than 940,000 registered buildings.)

The deadliest periods are the spring and fall migrations, with birds colliding by day because of reflective glass, and by night due to lights left on in office towers. FLAP has produced a “field guide” of some of the more common kills, including ruby-throated hummingbirds, golden-crowned kinglets, northern flickers, and rose-breasted grosbeaks. In most cases, the cause of death is brain hemorrhage due to high-speed impact.

At the Yonge center it’s alleged that more than 800 migrating birds were killed or injured during a nine-month period in 2010. Several collisions involved birds listed as threatened by federal law, including Canada warblers and olive-skinned flycatchers.

The laws cited in both cases don’t specifically deal with bird collisions. But Ecojustice argues that light reflected by the glass panes is a contaminant that kills birds, in some cases rare species.

Convictions could bring maximum fines of $6 million for each day of the offence. Koehl has said his group would be satisfied with a court order for the property developers to make their widows less dangerous to birds.

Cadillac Fairview has already made clear it takes bird collisions at its office complex “very seriously.” The company has announced that it will install film patterns on the windows, making them less reflective.

Since 2010, new buildings in Toronto must have glass design features that “mute” reflections for at least 40 feet above ground, where most bird collisions occur. Design features to reduce collisions — from simple decals on windows to installing angled glass — were made available to property developers in a much-applauded report produced for the city by a group of experts.

The great majority of Toronto buildings, of course, went up before 2010. Ecojustice is counting on a legal victory to put all property owners on notice about birds that go “thud” in the day and night.