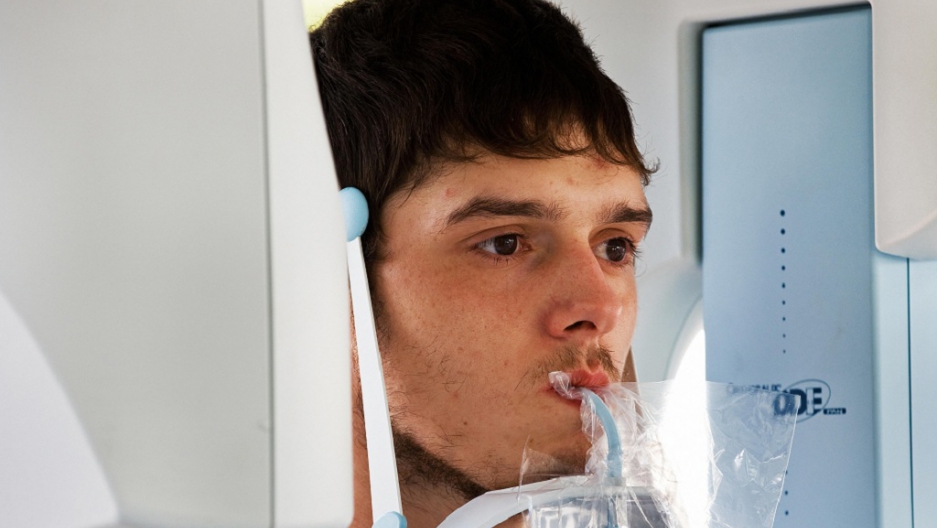 Bitewing dental X-rays involve patients holding the film in place by biting down on a tab. A new study published in the American Cancer Society's 'Cancer' journal says regular exposure to these tests can double or triple the chances of developing non-malignant meningioma brain tumors.
Credit: PAUL J. RICHARDS
Share

Researchers in the United States have found that getting regular dental X-rays may significantly increase the risk of developing non-malignant brain tumors.

According to a study published in the American Cancer Society's 'Cancer' journal, having bitewing X-rays where the patient holds the film in place by biting down on a tab, can double or triple the chances of developing meningioma tumors, Press Association reports.

The research was done by scientists and doctors at Yale and Harvard, as well as other prestigious institutions, NBC says.  It explains that 1,433 people diagnosed with meningioma were asked about their history of dental x-rays and compared to 1,350 people with no such diagnosis.

More from GlobalPost: Aspirin is shown to reduce cancer risk, but is it worth the side-effects?

CNN says that the meningioma patients had more than a two-fold increased likelihood of having ever experienced a bitewing dental X-ray and those who'd had these exams once a year or more were 1.4 to 1.9 times more likely to have had a meningioma.

The study's lead author Elizabeth Claus, who is also professor at the Yale School of Public Health and a neurosurgeon at Brigham and Women’s Hospital in Boston, told the Washington Post that ionizing radiation is the major environmental risk factor for meningioma and that dental X-rays are the most common artificial source of exposure to ionizing radiation in the US.  She added that it takes an average of 20 to 30 years after exposure for meningioma to develop.

The American Dental Association recommends that children get one X-ray every one to two years and for teens to have one every 1.5 to three years, with adults every two to three years, AFP writes.

"It’s a cautionary tale," independent expert, Dr. Donald O’Rourke, from the University of Pennsylvania told CNN. "We do know that radiation can cause tumors, and we have to be judicious with its use."