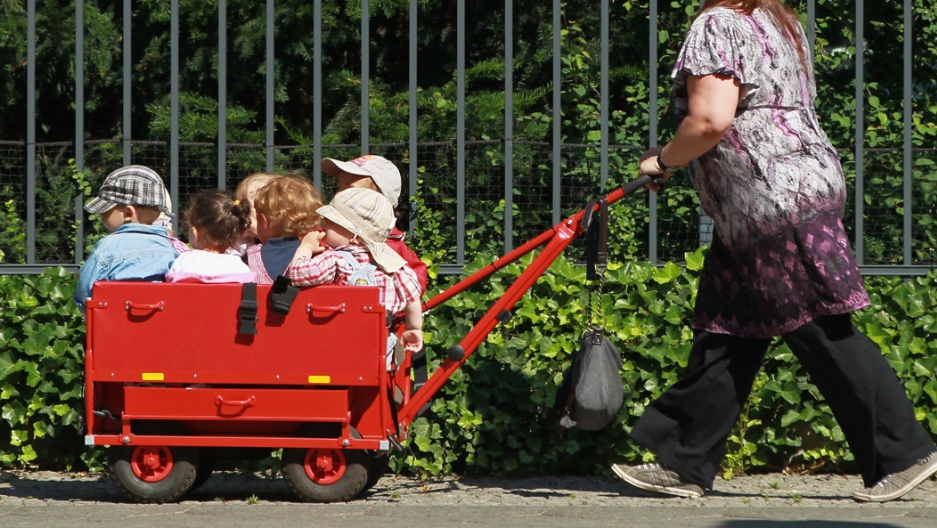 A plan to shore up the family with subsidies could cut women out of the financial picture longterm.
Credit: Sean Gallup
Share

BERLIN, Germany — Should parents who don’t opt to send their kids to state-funded childcare be compensated financially?

That is the crux of a debate that is currently raging in Germany.

The so-called “Betreuungsgeld” or child-care subsidy, which the government plans to start paying out next year, has already been attacked by opposition politicians, academics and industry for being bad for both mothers and kids.

Now, however, even members of Chancellor Angela Merkel’s ruling coalition are questioning the wisdom of such a project — particularly after it emerged that the costs will be far higher than originally calculated.

Family Minister Kristina Schroeder is working on the draft legislation. As currently envisaged, parents who chose to keep their kids home instead of sending them to kindergarten will receive 100 euros ($131) a month for 1-year-olds in 2013. That would then increase to 150 euros ($197) for 1- and 2-year-olds the following year.

The coalition government agreed to the measure under pressure from the conservative Christian Social Union (CSU), the Bavarian sister party to Merkel’s Christian Democrats (CDU). Critics say the subsidy simply panders to conservative voters who object to other government plans to extend childcare, regarding it as a threat to conventional family structures.

Gender roles in Germany can still be quite traditional, with the pejorative term “Rabbenmutter,” literally meaning “raven mothers” used by some to imply that woman who leave their children to work are selfish.

The previous Family Minister Ursula von der Leyen, a member of the CDU, had annoyed many in the CSU by pushing forward plans to significantly improve the supply of public childcare, as well as by providing generous subsidies for parental leave, or “Elterngeld,” in part to make it easier for mothers to return to work.

Critics have warned that the new childcare subsidy could be counter-productive, acting as a disincentive, particularly to low-paid women, to stay out of the workforce for longer. And that it sends mixed signals in the light of the other measures.

“We have found that because of the parental leave payment more mothers are returning to work when the children reach 1 or 2,” says Katharina Wrohlich, a social policy researcher at the German Institute for Economic Research in Berlin. “Now with this money, it will be a step backwards, because the incentive is being created for the woman to stay at home. So it is something of a zig-zag policy.”

She says the longer women chose to stay out of the labor force, the harder it is to get back in and the greater the risk of poverty. “We know that the shorter the interruption the better it is for the long-term wages, for the risk of unemployment and very importantly for pensions.”

German women already suffer the biggest gender pay gap in Europe and the Organization for Economic Cooperation and Development recently criticized the persistent income inequalities and singled out the lack of adequate childcare as a barrier to women earning more.

Furthermore, some experts warn that the children’s welfare is not necessarily best served by keeping mothers at home.

In particular children from immigrant backgrounds whose parents might not speak German fluently can be put at a disadvantage if they enter school at the age of 6 without kindergarten experience. And children of parents who are less educated also benefit far more from an early learning environment.

“From the point of view of integration and equality of opportunities, it would have potentially very negative consequences for children,” says Wrohlich.

These fears are backed up by a recent study, carried out by researchers at the University of Heidelberg, who looked at a similar payment introduced in 2006 in the eastern German state of Thuringia. Their research found that there is a direct link between the measure and lower take up of daycare spots.

She said that when it came to poorer families and those where the parents were not particularly well educated, there was even greater impact, due to the relative attractiveness of the 150 euro payment to those on low incomes.

“Research also shows that children from low-educated background and low-income backgrounds benefit the most from going to public daycare,” she said. “Hence, if the policy encourages exactly that group not to go to daycare, you create more inequality in early childhood education. We also know from research that this has very long term consequences into adult life.”

On the basis of her research in Thuringia, Gathmann advises the government against introducing a similar childcare subsidy nationally. “It is not obvious that it is helping the mothers in terms of their labor market careers, and it’s not obvious that it is helping the children in any area,” she warned. “And given tight public budgets and the costs of this program, I don’t see any rationale for introducing it.”

Wrohlich of the DIW says that if parents chose not to send their children to daycare then that is their prerogative, but that it is “absurd” that they should be compensated for not availing of a state-funded service.

“What about people who have never been to the opera or who don’t use the swimming pools?” she asks. “They are also funded by the state.”

And she warns that the government is unnecessarily making it less attractive to send children to kindergarten.

“It should be left to the individual,” she argues. “The state should not steer them in one direction, by creating an incentive for the mother to stay home longer than she would if there were no such payment.”

Furthermore, there are the prohibitive costs involved in the program that might better be spent on extending childcare provisions. There is currently a shortfall of daycare spots in many parts of Germany, particularly the former West. The government has committed to providing 35 percent of 3-year-olds with nursery spots by 2013 but many states are still far behind that target.

A consequence of this delay is that parents who would like to send their children to daycare but cannot find a spot will be happy to at least avail of the state subsidy. And that looks like making the program far more costly than originally envisaged.

The realization that this costly juggernaut is heading right at them, just as they are trying to cut deficits, has caused many in the governing parties to take stock.

Last week 23 CDU members wrote a letter to their party floor leader Volker Kauder, saying they opposed the measure. And the junior partners in the coalition, the free-market Free Democrats (FDP), are also questioning the wisdom of the measure.

Justice Minister Sabine Leutheusser-Schnarrenberger, a member of FDP, told Spiegel magazine that it “no longer suited the times,” saying that extending the provision of public day care should have a higher priority.

Yet Merkel is sticking to her guns. Her spokesman Steffen Seibert said last week that the government was still on track to come up with the measure, which was part of the program agreed on by all three coalition parties last November.

He said that the draft bill would be brought before parliament ahead of the summer break. “When it is presented, then there will be an opportunity for the necessary discussions.”

Even if it passes, however, there could be problems ahead.

Lawyers warn that financially favoring one set of parents simply because they chose to keep their kids at home could well prove to be unconstitutional.