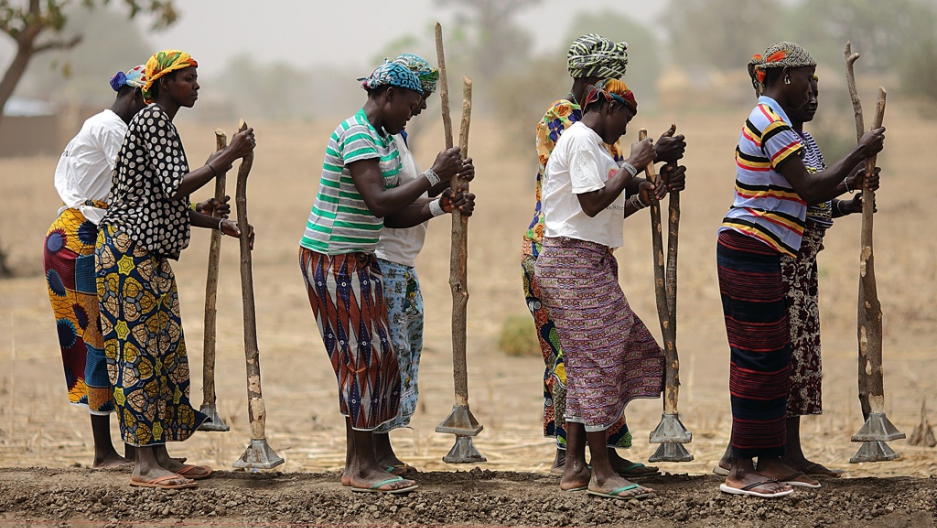 Women work on March 21, 2012 in a field as part of a cash for work program run by the French non-governmental organization Action Against Hunger to build dikes to hold water near Diapaga, northeast of Ouagadougou, Burkina Faso. According to Action Against Hunger, at least 20 million people are threatened by famine this year in Sahel.
Credit: Raphael De Bengy
Share

Mali's coup and its Tuareg rebels have been scooping a lot of headlines lately.

And the threat of Al Qaeda activity concerns many experts.

Here's another crisis that is hitting the Sahel region: drought and severe food shortages.

A serious humanitarian crisis looms unless aid is scaled up soon, senior United Nations officials warned Tuesday, according to the AP.

The situation in the 3,400-mile Sahel zone, that is on the southern fringe of the Sahara Desert and stretches from the Atlantic Ocean to the Red Sea is suffering from lack of attention because of the conflict in Syria, said the U.N. High Commissioner for Refugees, Antonio Guterres.

“We badly need to put this crisis on the map because its humanitarian dimension is becoming extremely, extremely dramatic,” he told reporters in Geneva.

The Sahel region includes the countries of Mali, Chad and Niger and has been hit hard by political instability and three droughts in less than 10 years, reported the Guardian. So far a UN appeal in December for $724 million for food to the Sahel has raised about half that amount, Guterres said.

UNICEF’s Executive Director Anthony Lake said at least 1 million — and possibly up to 1.5 million — children face acute, severe malnutrition, putting them at risk of death from starvation or disease. Of these, about 330,000 children are in Niger, some 208,000 are in northern Nigeria, 178,000 are in Mali and 127,000 are in Chad. The figures, which also cover Burkina Faso, Mauritania, northern Senegal and northern Cameroon, don’t even include Sudan or South Sudan, where simmering conflicts are also stoking a humanitarian crisis.

Unless donor countries provide more funds, “the result will be many children will die and many families will suffer,” he said.

Lake, who just returned from a visit to Chad, told Voice of America he witnessed the tragedy of child malnutrition.

He said he visited one of UNICEF’s feeding centers where children suffering from acute severe malnutrition are being treated.

“There I met a mother and a little child named Fatima," said Lake. "She looked to be about five months old or four months old. She is actually just over a year. But, she is recovering. And, I just kept looking at her and thinking not just about how she is alive, but she now has this whole future ahead of her. And, when you see that in one child and then you think about it in terms of a million times, you can be very moved," he said.

Previous droughts in 2005 and 2010 meant many of the 15 million people affected by the crisis in the impoverished region have already sold off their reserves to survive, and aid needs to arrive by July at the latest.