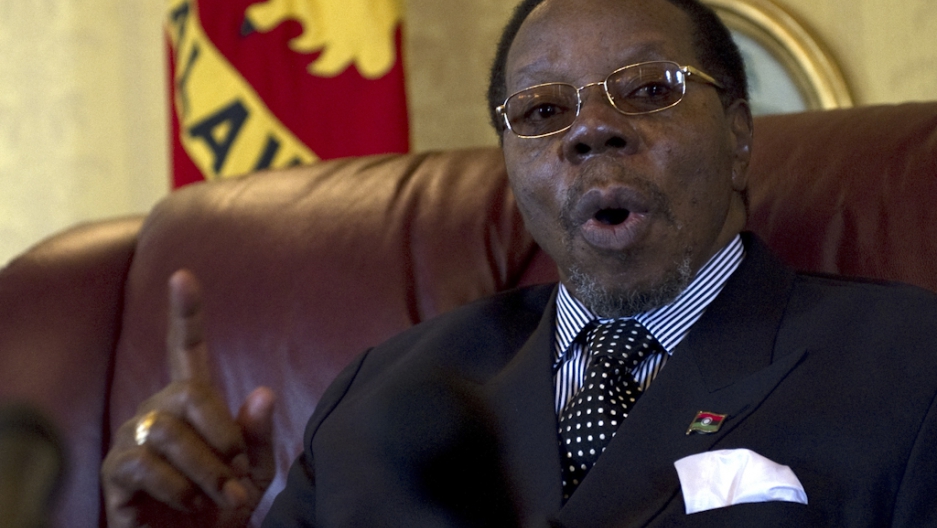 Malawi's President Bingu wa Mutharika answers questions during an interview in Lilongwe on July 18, 2011. Mutharika was admitted to hospital on April 5, 2012, after suffering a heart attack. He is reported to have died shortly after arriving at the hospital in Lilongwe.
Credit: ALEXANDER JOE
Share

JOHANNESBURG — More than a day after Malawi's President Bingu wa Mutharika died from a heart attack, the Malawian government still hasn't announced his death, and concerns are growing about a battle over his succession.

The 78-year-old was rushed to a hospital in Lilongwe, the capital, on Thursday morning after collapsing at a meeting, but was dead on arrival, sources told Reuters.

A brief statement read on state radio and TV late Thursday said Mutharika would be traveling to South Africa to receive treatment, but gave no mention of what was wrong. Hospital and government officials in Johannesburg have refused to comment.

According to the BBC's sources, who also say Mutharika is dead, his body was taken to South Africa while the government decides who should take over. Ministers have reportedly been in emergency meetings all night.

Malawi's government has yet to make an official announcement about Mutharika. Independent newspapers have criticized the government's handling of the situation, with the Nyasa Times saying that that senior officials agreed to fly the president to South Africa in an attempt to buy time.

The US State Department said in a statement Friday that "we are concerned about the delay in the transfer of power."

"We trust that the vice-president who is next in line will be sworn in shortly," the statement said.

Under Malawi's constitution, the vice president – currently Joyce Banda – must take over if the president is too ill to serve, according to the Nyasa Times.

This represents a "huge shake-up" in Malawian politics, said the BBC's correspondent, since Mutharika expelled Banda from his party in 2010 after they dramatically fell out.

Banda, after news broke that Mutharika was in hospital, asked Malawians to pray for the president.

"When I first heard the state president had been taken ill, I quickly wished him quick recovery," she said.

Malawi, a peaceful southern African nation praised for its democratic system since shedding the dictatorship of Hastings Kamuzu Banda in 1994, had under Mutharika slid backwards towards authoritarianism.

Mutharika had been president of Malawi since 2004.

He faced violent protests against his rule last year, in which at least 18 demonstrators died. Last month, Mutharika accused Western donors of "conspiring" with civil society activists to oppose his leadership.

The claim came a year after Britain's ambassador to Malawi accused Mutharika of "becoming ever more autocratic and intolerant of criticism," in a leaked embassy cable that prompted Malawi's government to expel the diplomat. Britain subsequently suspended aid to Malawi, which the UN ranks as one of the world's poorest countries.

Mutharika told the Guardian in February that Hastings Banda had been misunderstood, saying that "sometimes discipline can be mistaken for dictatorship."