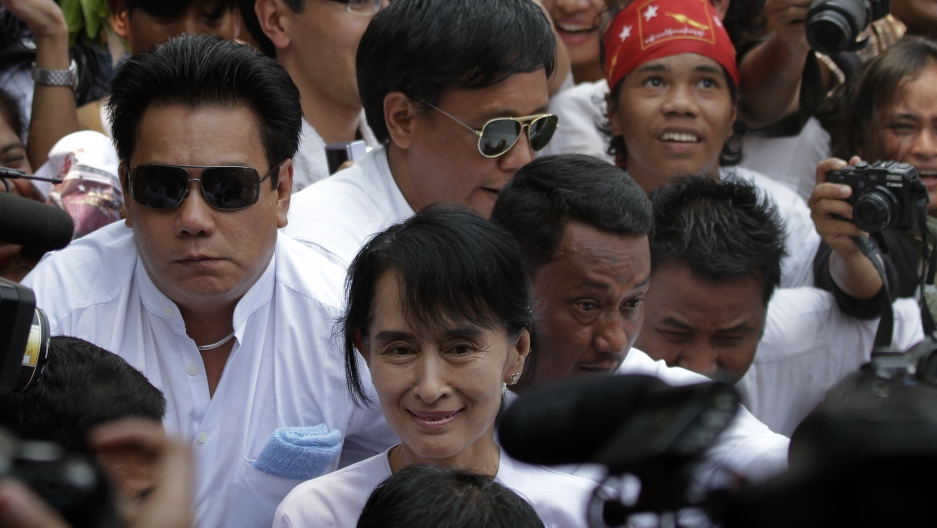 Myanmar's pro-democracy leader Aung San Suu Kyi makes her way trough the crowd as she arrives at the office of her National League for Democracy in Yangon April 2, 2012. Aung San Suu Kyi won a seat in parliament on Sunday after an historic election t

Myanmar's government will be rewarded for last weekend's seemingly trouble-free elections. U.S. Secretary of State Hillary Clinton announced Wednesday that U.S. sanctions against the country will be gradually lifted.

"We fully recognize and embrace the progress that has taken place and we will continue our policy of engagement," Clinton said to the median, according to the U.K.'s Guardian newspaper.

According to the Guardian, the U.S. will move to name an ambassador to Myanmar, also known as Burma, setup an office of the U.S. Agency for International Development, and support U.N. development programs planned for the country. Other steps weren't outlined, but Clinton said the U.S. is committed to "beginning the process of a targeted easing of our ban on the export of US financial services and investment as part of a broader effort to help accelerate economic modernisation and political reform," the Guardian said.

There were also signs that the U.S. may allow Burmese officials to get visas to visit the United States — something that had been prohibited for years.

BBC correspondent Rachel Harvey said the United States has made clear they would match positive steps with reciprocal steps of their own.

"That's exactly what's happened, and it's happened pretty swiftly," Harvey said. "These easing of restrictions are deliberately targeted to try and boost the standing of reformers within the Burmese leadership and at the same time try and increase the capacity of the United States to help in development of humanitarian work."

Harvey said it will be crucial that the U.S. ease sanctions on Burmese financial institutions, so that the country's economy can rebound.

There's been a lot of talk, Harvey said, about what the government of Myanmar will ultimately look like. Will it be like Jordan, where there's a King over a democratically elected government? Or like China, where a group of party elites maintain ultimate power? Harvey said only the Burmese leaders know what they're aiming for.

"One model within this region that I've heard talked about a lot is Indonesia, which itself was under a military dictatorship ... for some two decades," Harvey explained. "Then they went though a transitional period where the military still retained a number of seats in Parliament. That's exactly what's happening in Burma, Myanmar. The question, then, is whether Burma's ready to take the next step, as Indonesia has done, get the military out of formal politics all together."

If you look at the way Indonesia's economy is growing, by leaps and bounds, that may be the model and incentive Myanmar's leaders need to keep pushing ahead with reforms, Harvey said.

In Myanmar, despite the excitement over the success of the elections and the move to relax sanctions, Harvey said there's still signs of caution off the streets of Myanmar.

"Those within the military-backed establishment who fear reform, who fear the pace and scope of the changes taking place in Burma, well they might have looked on those scenes (of celebration this weekend) with some degree of trepidation and fear," Harvey said. "There is an awareness that it's not worth provoking or scaring those guys who still hold a lot of power."

Many steps remain in front of Myanmar as it tries to move to becoming a more integrated part of the global economy.