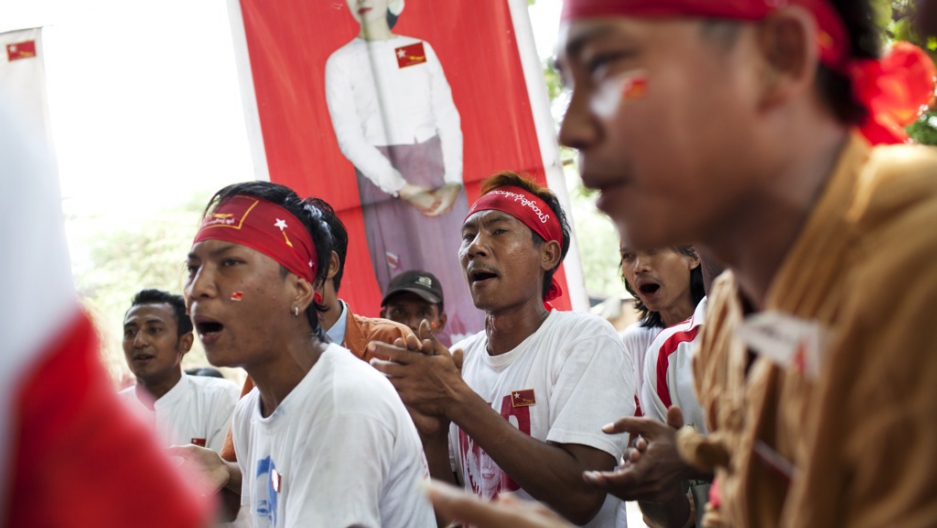 National League for Democracy (NLD) supporters participate in a rally ahead of the country's by elections, in Mingalar Taung Nyunt township, in Yangon, Myanmar, March 23, 2012. A poster of Daw Aung San Suu Kyi is held up by a protester in the background. NLD candidate Phyu Phyu Thin is running for election in the Mingalar Taung Nyunt township.
Credit: Will Baxter
Share

Senior Myanmar officials can travel to the United States, and US financial services can be exported as sanctions are lifted against that country, The Associated Press reported today.

US Secretary of State Hilary Clinton made the announcement in recognition of recent free and open elections in Myanmar, the AP said.

“It’s now going to be critical for (Myanmar) authorities to continue to work on reform of the electoral system so that it fully meets international standards, including transparency, and it expeditiously looks into any irregularities,” Victoria Nuland, a state department representative, said on Tuesday. “But we are obviously hoping for a continuing evolution of the (Myanmar) political system heading towards the next scheduled elections, which I think are 2015.”

Myanmar, also known as Burma, had been under military rule for more than 50 years.

Aung San Suu Kyi and the National League for Democracy won 40 of 45 polls in Sunday’s elections.

The news follows reports that European and Asian leaders are planning to ease sanctions, BBC said.

Leaders at an Asean summit also called for the immediate lifting of sanctions.

Clinton also said the US would open an Agency for International Development office in Myanmar and assign an ambassador, according to BBC.

European Union sanctions will end at the end of this month, the Financial Times said.

EU foreign ministers will rule on individual sanctions at a meeting in about two weeks, the FT said.

Furthermore, Australia is “committed to providing tangible rewards for progress in Burma, including by easing our sanctions,” Foreign Minister Bob Carr told the FT.