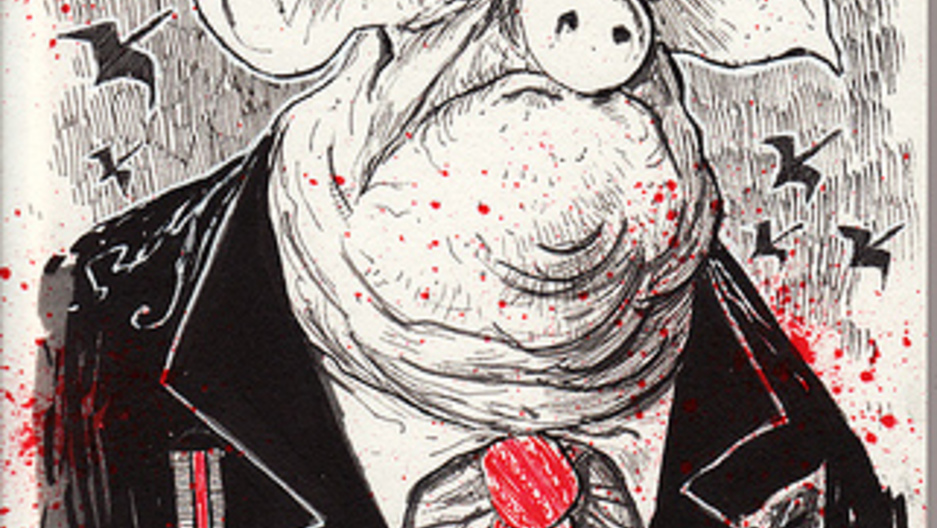 A fan made cover for George Orwell's novel. "Animal Farm" is one of Orwell's most well-known works and gained unlikely popularity with Ukrainian refugees. (Photo from Flickr user Ben Templesmith.)

While attention to George Orwell in the United States and in Hollywood of late is perhaps most focused on his novel "Nineteen Eighty-Four," it was "Animal Farm" that gained popularity among Ukrainian refugees after World War II.

As he put it in his preface to the Ukrainian translation of his novel, George Orwell wrote "Animal Farm" to destruct the "Soviet myth." This message resonated with the millions of Ukrainian in refugee camps across western Europe — displaced by the battles between Germany and the Soviet Union.

"This was right after World War II, and was very fresh in memory,” said Vitalij Keis, a 76 year-old refugee. “My family, one fifth of my family was exiled to Siberia, and we never found any trace of them."

Published in 1945, "Animal Farm" was a novel about the inequal treatment of different animals, led by the pigs, on the titular farm after the animals overthrow the oppressive farmer, Mr. Jones. Famously in the novel, one of the rules of the farm, "All animals are created equal," is replaced with, "All animals are equal, but some animals are more equal than others," as the pigs become more human and the inequality worsens. The novel is a harsh allegory for Stalinist Communism.

The book's description of the mistreatment of the other animals, including famine, forced collectivization and mass arrests mirrored the hardships Ukrainian refugees faced in the Soviet Union.

Keis' niece, Andrea Chalupa, is the author of a new e-book "Orwell and the Refugees: The Untold Story of Animal Farm." She said the novel gained popularity among refugees after a Ukrainian scholar named Ihor Shevchenko read the book in 1946 and wrote Orwell requesting a Ukrainian translation.

"The message of your book resonates with me and I translated it out loud to Ukrainian refugees here, and they love it, and we want to make copies and give it out to people," Shevchenko wrote.

Orwell was apparently delighted to learn of his new audience and allowed for "Animal Farm" to be translated free of charge, refusing any royalties. Keis said, as he understands it, it was the first translation of "Animal Farm."

Orwell, a self-proclaimed Socialist, fought with the Communists in the Spanish Civil War against the Fascists. It was there that he learned the Republican faction was quite fragmented. Orwell unknowingly joined the Communist militia not led by Moscow. He and his wife were nearly killed by Stalinists during the war.

Orwell wrote, "In my opinion, nothing has contributed so much to the corruption of the original idea of Socialism as the belief that Russia is a Socialist country and that every act of its rulers must be excused, if not imitated."

"Animal Farm" was added to a sort of required reading list in some displaced persons camps in West Germany, where Ukrainian refugees stayed. After telling her uncle of the novel she was working on, Keis gave Chalupa his copy of "Animal Farm" he received in the camp. She keeps it in a glass case at her parents' house.