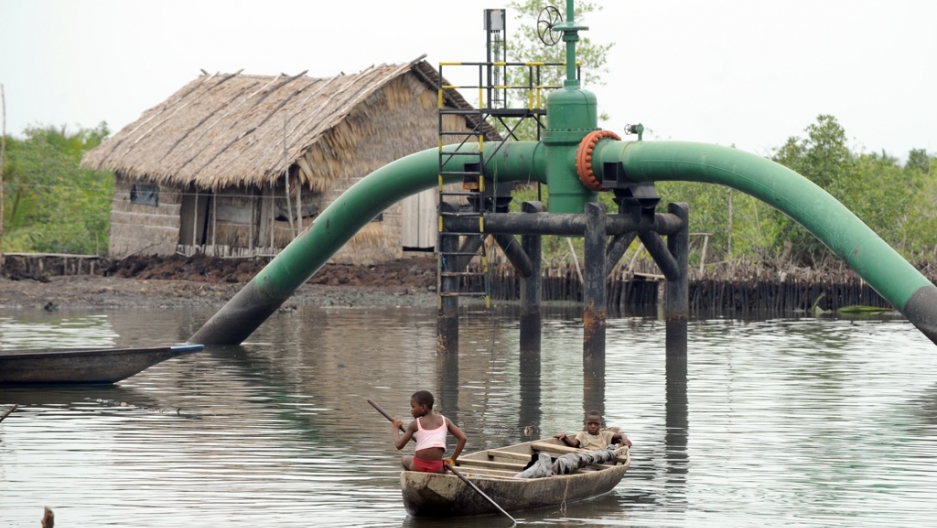 Nigeria's Niger Delta area is the center of the country's oil production and has been hit by protests by local people against pollution of the environment and lack of development and jobs for local communities. Here Nigerian children boat past an oil pipeline head near their home at Andoni settlement, Bonny waterways in Rivers State on April 12, 2011.
Credit: Pius Utomi Ekpei
Share

Nigeria has trouble enough with ongoing violence by the Islamic extremists of Boko Haram in the country's north.

But the country also has the simmering tensions in the southern Niger Delta area — where the oil is pumped that is the mainstay of Nigeria's economy.

Today hundreds of protesters blocked Shell oil workers from getting to the rigs, as part of their campaign to pressure the company to provide electricity and drinkable water to the local Nhembe Island community, according to the BBC. The demonstrators also called for Shell to hire more local Nigerians.

Nigeria is Africa's largest oil producer, pumping more than 2.2 million barrels of crude a day, and it is the fifth largest supplier of oil to the United States.

More from GlobalPost: Nigeria on the brink

Yet the oil-producing Niger Delta area remains one of the country's poorest and least developed. Local communities also complain that the oil industry is polluting the fragile delta environment and preventing people from fishing earning a living from the land.

Armed gangs targeted oil companies by kidnapping foreign workers and disrupting production from 2006 to 2009. One of the leading rebel groups was the Movement for the Emancipation of the Niger Delta (MEND). Those violent protests were blamed for causing Nigeria's oil production to drop by more than 28 percent. That signficant disruption hurt the Nigerian economy as well as the oil companies.

The Nigerian government promised to boost development in the area and declared an amnesty to the oil rebels in 2009. Many rebels turned in their arms and the violence largely subsided.

But MEND has resumed its violent protests. Last month the group claimed responsibility for killing four police officers on a patrol boat in the Nhembe River in Bayelsa State, reported Aljazeera.