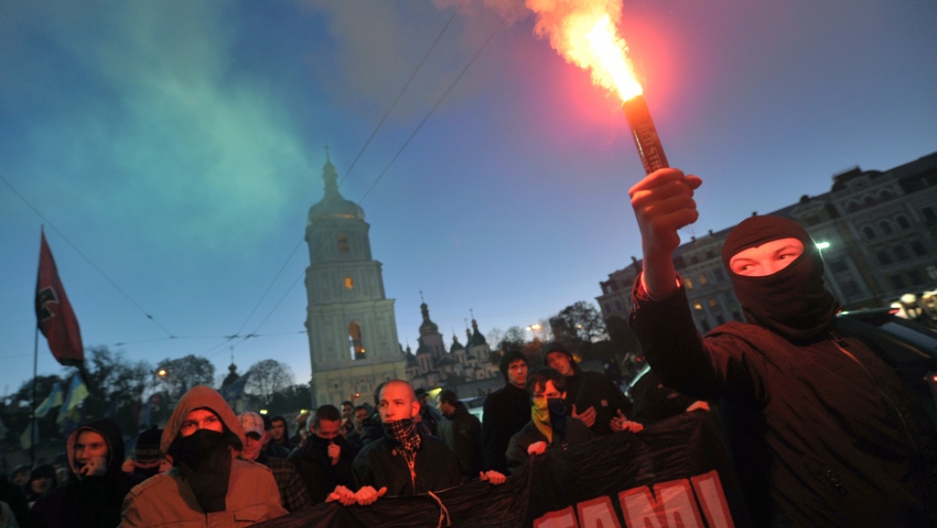 This is the second story in a five-part series exploring the rise of the far-right in eastern Europe. In part one, the political battle over an historic theater highlights growing anti-Semitism in Hungary. Part two examines the growing popularity of Svoboda, a far-right party in Ukraine. Part three visits a popular Ukranian restaurant designed to ridicule Jews. In part four, the EU considers what it can do about far-right extremism in its domain, and part five takes a broader look at the problem across the region.

L'VIV, Ukraine — In this great city of western Ukraine, the worst of the European experience is creeping back into democratic politics.

In L’viv, it comes under the guise of Svoboda, a party calling for a Ukraine that is “one race, one nation, one Fatherland.” Originally known as the Social-National Party, it is rooted in Nazi collaboration.

This wasn't supposed to happen. In 2004, following a disputed national election, the Orange Revolution, a peaceful campaign of protest, swept a coalition of moderate nationalist politicians into power. They quickly fell out among themselves. A blizzard of allegations of corruption swirled around them. One of the original leaders of the Orange Revolution, Yulia Tymoshenko, is in prison, convicted of "abuse of office,” although rights groups say her incarceration is politically motivated.

From journalists, cab drivers and young entrepreneurs, to peasant women who run market stalls to supplement their state pension by selling homemade cheese and pickles, everyone says the same thing: the politicians of all parties are only in it for themselves, grabbing every penny they can. Meanwhile, Svoboda has grown in popularity. Young people are drawn to the nationalist rhetoric, and older supporters are more used to life under the kind of authoritarian views it holds.

Svoboda is now the largest party on L'viv city council and in the regional council. It has taken power in other major urban centers of western Ukraine, like Ternopil and Ivano-Frankivsk. Come this October, when the country holds elections, Svoboda is expected to make the jump to the next level and win seats in the Verkhovna Rada, the national parliament, for the first time.

Besides disappointment with the main democratic parties and endemic corruption around the country, Svoboda's rise underscores a swell of anti-Semitism in a part of the world where the Holocaust was at its fiercest and there are virtually no Jews left. It is a symptom of an ultra-nationalism all along the eastern borders of Europe. This extreme form of racially based nationalism links Soviet Communism and Jewishness together. The patriotic fight against the former leads to Nazi-glorification and an excusing of local fighters roles in helping to murder Jews during the Holocaust.

Svoboda’s success so far has been built on a skilled public-relations campaign, complete with videos re-enacting Nazi propaganda tropes like torchlight parades and speeches that echo Hitler. Svoboda also honors Ukraine veterans who fought with the Nazis in a unit known as the Waffen SS-Galicia against the Soviet Army and the threat of what they refer to as “Jew Communism.”

They deal in gesture politics, changing the name of Peace Street, in an outlying district of L'viv to Nachtigall Street, in honor of a Ukrainian group that was implicated in a massacre of the city's Jews after the Nazis arrived in June and July 1941. Svoboda's reason: "Peace Street is a holdover from Soviet stereotypes." Their political demonstrations frequently turn violent. Last September in Uman, Hasidic Jews on annual pilgrimage were confronted by Svoboda activists. The two groups were separated by police. The Svoboda contingent then attacked the cops. Dozens were arrested.

Last month, German historian Grzegorz Rossolinski-Liebe, was forced to cancel lectures around Ukraine after receiving calls from people threatening to harm him, as well as being followed by hundreds of Svoboda supporters wherever he went. His crime: lecturing on Stepan Bandera, leader of an ultra-nationalist group during World War II, a fascist responsible for many atrocities against non-ethnic Ukrainians. For Svoboda, Bandera is a hero.

“We consider tolerance a crime”

The person organizing the demonstrations and making the firebrand speeches is Yuri Michalchyshyn. At 29, he is barely old enough to remember the bad old days when Ukraine was under Soviet rule. He speaks a romantic nationalist language rarely spoken by mainstream western politicians. "A nation is an organic thing, historically defined. A wave of passionate energy which unites past, present and future generations," Michalchyshn said, seated in the office of Iryna Sekh, his party's leader at the regional council. "The Ukrainian nation is the current territory of the Ukraine reinforced by language and recent history of social and national struggle."

Watch video from a torchlight march organized by Michalchyshyn below

Svoboda's racial theorizing is built on sand, since most people who live in the region have mixed blood. "Ethnically, Ukraine doesn't exist," according to Ukrainian historian Andriy Kozitzky. The western part of the country nestled up against Poland and Hungary is a mix of many groups: Russian, Ukrainians, Armenians. That’s irrelevant to Svoboda followers. Mychalchyshyn said: "We are against diversity.” In his writings, he says, "We consider tolerance a crime."

The young ideologue promises a parliament composed of Ukrainians voted for by Ukrainians. Minorities will be given seats based on their proportion of the population. But they won't be able to vote. His supporters also like his promise to get Ukraine's nuclear weapons back. When the Soviet Union collapsed the nuclear weapons based in Ukraine were returned to Russia or were decommissioned. "It's a mentality," said Mridula Ghosh, a sociologist who works for the East European Development Institute in Kiev. "Svoboda is anti-immigrant, xenophobic, and anti-Semitic."

Ukraine’s nationalist past and present

It would be comforting to write Svoboda off as a morbid symptom of a country moving away from 70 years of the bloodiest conflicts in European history and Yuri Michalchyshyn as a young loudmouth. That is difficult to do. The party speaks directly to its constituents' fears about Russia and its anger about corruption in the national government. Svoboda has also tapped into fervent anti-Russian sentiment in Ukraine, which persists even among those who don’t agree with Nazi ideology. During World War II, Ukraine was overrun by the Soviets as they pushed into Europe. Amid that turmoil, Bandera emerged as a controversial figure to lead a violent Ukrainian independence fight against the Soviets.

In 1943, the Nazis established a Ukrainian division of their feared SS, known as the Waffen SS-Galicia, as the western part of the country was known as the time. Bandera’s men first collaborated with the Nazis against the Soviets, and then later waged a sporadic guerilla war against the USSR. But his group also launched a campaign of ethnic cleansing in western Ukraine against Polish villagers, beginning in 1943. Priests were beheaded and crucified, men were disemboweled, women gang-raped. Families were locked into wooden barns and the buildings set on fire.

The terror worked. The area was ethnically cleansed as Poles fled the region. Cementing his hero status for Svoboda adherents, Bandera was later assassinated by the KGB. In 2010, former Ukrainian President Viktor Yushchenko named Bandera a hero of the Ukraine. A year later, his successor Viktor Yanukovych, who is perceived to have close ties to the Kremlin, revoked the honor, underscoring the concern many Ukranians have about Russian interference in their government.

Even for nationalists who don’t agree with Nazi ideology, Bandera remains an inspiration.

Historians of World War II say the lines between the Waffen SS-Galicia and the various partisan groups associated with Bandera are blurred, and that all groups can be implicated in the massacres.

Not everyone in L'viv buys the Svoboda line. Last May, at Victory Day celebrations marking the defeat of the Nazis, a near riot broke out when Sekh, the Svoboda regional leader, and a group of supporters turned up. Police had to separate Sekh and her young acolytes from those who had turned up to simply mark the defeat of the Nazis. "We were afraid there would be Red flags. We were protecting our history and culture." There was much pushing, shoving and fist-fighting with the police in the middle. With a touch of the melodramatic, Sekh says she spent the next few months carrying her pajamas and toothrush with her everywhere because she expected to be arrested for instigating a riot. Charges were never filed against her.

Nationalism still appeals to Ukranians such as Myroslav Marynovych, a 63-year-old vice-rector at the Greek Catholic University. After World War II, Marynovych spent years in a Soviet gulag for demanding the right to discuss Ukranian national history. There, he met several men who had fought with Bandera’s group and the Waffen-SS Galicia. He said that he doesn’t agree with nationalist extremism, but that in the circumstances of World War II he can't condemn it completely.

“I defend their patriotism, but not their methods," he said. Meanwhile, he tries to influence debate via his position at the university, taking part in acts of reconciliation with the tiny Jewish community that remains in L'viv and, as in his dissident days, writing letters to the editor of Svoboda-supporting newspapers. Most recently, he challenged an article they published written by a Holocaust denier.

At the L'viv headquarters of Viktor Yanukovych's ruling "Party of Regions," they acknowledge their policies are a hard sell to the voters.

The local deputy leader Laura Arzumanivna Arzumanyan, of Armenian heritage, is philosophical. It's all part of the scientific processes of history. "The fact that Svoboda appeared is something that had to happen," Arzumanyan said.

"Let me ask you, how old is America?" she answers her own question, "200 years old. You are a very old country. We are only 20 years old. You had Ku Klux Klan. You passed through that time. This is something we must go through.”