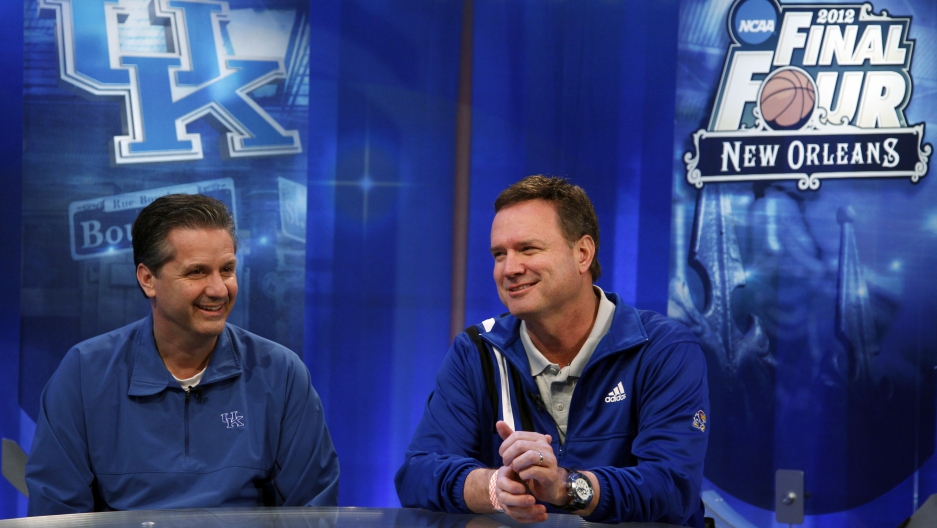 It's the Jayhawks and the Wildcats playing for the NCAA basketball championship Monday night in a battle of basketball bluebloods that have been linked through sports history.

The two teams with the most victories in college basketball history, Kansas and Kentucky, will meet in the Superdome in New Orleans in a rematch of a game the two teams played back in November. It'll be a chance for Kansas to avenge a tough loss early in the season and win the storied program's fourth NCAA national title. For Kentucky, it would cement the team's standing as the most dominant of the year and give the university its eighth NCAA basketball championship.

Kim Parks, a Kentucky fan from Chicago, said it'd going to be a long day at the office while waiting for the game to go.

Mark Domitrovich, a Kansas Jayhawks fan, said he's confident his team, the heavy underdog, will find a way to win.

"Grinding it out on defense. I think anything can happen. They definitely have a shot tonight," he said.

"This is completely different from what we've dealt with the past two seasons where we've had these underdog, guard-driven teams," he explained. "These are post-up teams. They play great defense. There's a lot of rebounding. And they're very well-coached.

Bill Self, who just won the Naismith Coach of the Year award as the best college basketball coach in the country, leads the Jayhawks while John Calipari leads Kentucky. Both coaches began their careers working as graduate assistants under Larry Brown at Kansas.

Self and Calipari met in 2008 when Calipari was the head coach at Memphis in the national title game. Self's Jayhawks walked away with the victory and Calipari's yet to win a title.

"If the game is close, I'd go with Kentucky," he said. "However, Kansas has been making big shots and making big defensive plays. They're a little bit of an older team."

In the end, that experience, Abdul-Matin said, is enough for him to predict Kansas as the winner — despite Kentucky being the odds-on favorite among most national pundits.