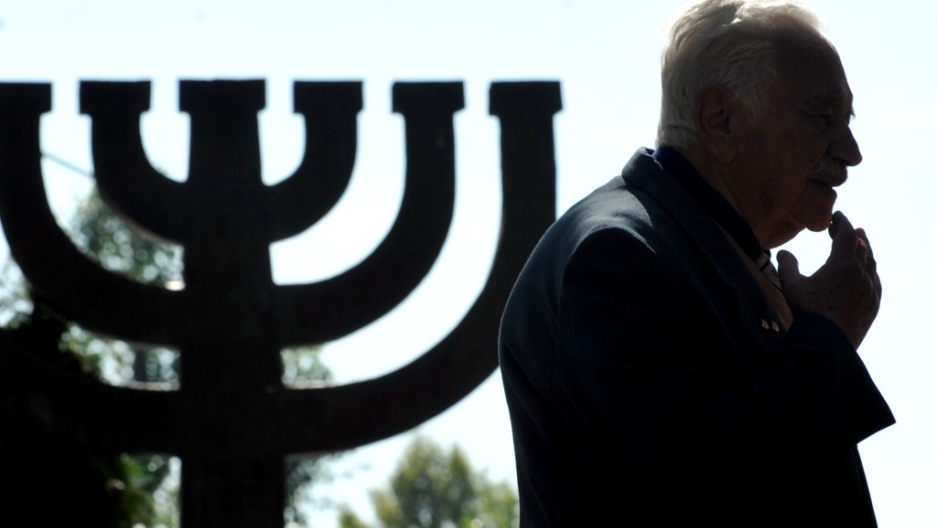 Remembering the 1941 Nazi massacre of Jews in Kiev. The Nazis murdered 33,771 Jews at Babi Yar on September 29 and 30, 1941, in an atrocity that has only been properly commemorated in recent years as the deadliest shooting massacre of the Holocaust.
Credit: SERGEI SUPINSKY
Share

This is the fourth story in a five-part series exploring the rise of the far-right in eastern Europe.In part one, the political battle over an historic theater highlights growing anti-Semitism in Hungary. Part two examines the growing popularity of Svoboda, a far-right party in Ukraine. Part three visits a popular Ukranian restaurant designed to ridicule Jews. In part four, the EU considers what it can do about far-right extremism in its domain, and part five takes a broader look at the problem across the region.

LONDON, UK — Twenty-two years ago, the world witnessed a jail-break the likes of which it had never seen before.

The Berlin Wall came down, and through that opening rushed whole nations imprisoned by Soviet hegemony. The Soviet Union disintegrated, but Russia didn't.

These newly escaped nations had one thought: getting protection from the big bad bear to the east.

To the west were two organizations that offered the prospect of protective alliances, NATO and the European Union. Initially, both had doubts about offering membership. For the EU, there were concerns that these countries, after decades of Communist rule, were not ready economically or in terms of democratic practice to join. But generous voices pointed out that the best way to promote democratic stability was through EU membership.

Ten former Soviet bloc countries are now members of the EU, with an eleventh, Croatia, about to join.

Martin Schulz, President of the European Parliament says, "I don’t know any other experiment in human history so advanced in terms of political integration and democracy."

But now the old doubts have resurfaced.

Some governments in eastern Europe are ignoring the human rights and democratic commitments their nations signed up for when they joined the EU.

Xenophobia and minority discrimination, often mixed with a right-wing authoritarianism that has echoes of 1930's-style fascism, are becoming mainstream. The clearest case is in Hungary, where a new constitution which came into effect on the first day of 2012 is setting off alarm bells.

Schulz says, "The European Parliament is seriously concerned about Hungary with regard to the exercise of democracy, the rule of law, the protection of human and social rights, the system of checks and balances, and equality and non-discrimination."

Following its landslide victory in 2010 elections, Fidesz, Hungary’s ruling party, effectively re-wrote the country's constitution, removing many of the checks and balances on executive power essential to democracy. The party severely curtailed judicial independence. Impartial election commissioners, who were supposed to oversee free and fair elections, were replaced by Fidesz members.

The same thing happened with the Central Bank.

Religious freedom has been circumscribed, as more than 300 faiths, including those of Seventh Day Adventists, Methodists, Unitarians, as well as a number of Islamic mosques, and Hindu temples lost their legal status.

They can re-apply, but the new constitution says they must have been active in Hungary for at least 20 years. Most of these faiths have not.

The EU has leverage in the situation. Back in 1993, its members agreed the "Copenhagen Criteria." Hungary and the other EU aspirants had to show their governments had "the rule of law, human rights, respect for and protection of minorities, the existence of a functioning market economy … " before they could join. They also committed to adhering to the Copenhagen rules as members. These are legally binding commitments.

The European Commission, the EU's administrative wing, has decided Hungary is in breach of them, and has instituted legal proceedings over several provisions of the new constitution. One particular issue on which Hungary's government is being challenged relates to judicial independence. The constitution mandates a retirement age for judges of 62, down from 70. This would mean the forced retirement of 274 judges.

Prime Minister Viktor Orban would have the right to appoint their successors. Clearly, it is meant to clear away judges who might rule against the radical constitutional changes in test cases.

So the EU plans to bring an age-discrimination case in the European Court of Justice.

Beyond legal proceedings, the EU has another big stick: money. Hungary is desperately trying to negotiate a loan from the IMF for 20 billion euros ($26.5 billion) to help finance its sovereign debt. The IMF is refusing to discuss the loans until the EU's questions about its constitution are addressed. Hungary may have one of the more visible problems, but populist extremism based in xenophobia, and Nazi nostalgia is rife in the EU's former eastern-bloc countries.

Recently in Riga, Latvia, an estimated 1,500 people marched in honor of the Waffen SS, and were watched by several thousand supporters. A small number of non-Latvian Jews including Efraim Zuroff, head of the Simon Wiesenthal Center in Israel, wore concentration camp stripes and stood in protest. There were also several hundred counter-demonstrators from Latvia's Russian minority. The march had initially been banned by the city council but the ban was overturned in court.

Joel Rubinfeld, co-President of the European Jewish Parliament, bemoaned Brussels’ unwillingness to intervene. "It's got to be in contradiction to EU rules to European legislation."

The EU could do something about it.

When countries join the EU they sign its basic treaty. In some ways the treaty is like the US Constitution. Article 2 commits all member states to respecting the diversity of their citizens, human rights and democratic practice. Article 7 states the ways in which member countries can be punished if they breach those commitments. But it takes one-third of member states agreeing to bring action against another member for article 7 to be invoked. The political reality is that there is no appetite for bringing action against Latvia for its honoring of ex-Nazis. One-third of the member states couldn't be lined up to do it.

The case of Hungary's constitution is so egregious it could not be ignored. Hence the legal case.

British MP Denis MacShane says, "The EU Commission does issue statements, but no more. Clearly Latvian politicians who endorse or excuse these Nazi commemorations should not be allowed to take part in EU events."

But MacShane, a former minister for Europe in Tony Blair's government, knows these Latvian politicians take part fully in the EU. The European Parliament is a freely elected body and it is full of politicians with extreme views.

Among them, MacShane, points out, the British National Party's Nick Griffin, and Krisztina Moravi of Hungary's Jobbik, who tried to wear the uniform of the Hungarian Guard, a fascist group of the 1930's, into the Parliament building.

Benjamin Ward, of Human Rights Watch, adds this criticism: "What's really missing at EU level is engagement as a group, with enough countries demanding action against the xenophobes."

The EU claims a lack of authority to act. The spokesman for the Commission's Vice-President,Viviane Reding, says that issues like Waffen SS marches and other xenophobic displays, which seem to violate the Copenhagen criteria "fall outside of EU law or are national competences."

The EU's lack of involvement in individual countries may be down to two connected facts. First, says Human Rights Watch's Ward, is that rather than stand up to the extreme views of the BNP and Jobbik, mainstream conservative politicians have appropriated them. Adds Ward, "The response of mainstream political parties has been to assimilate these intolerant views by watering down the way they express them. This has the effect of mainstreaming ideas about minorities."

Second, says Ward, "There is concern in Brussels that the EU is not a popular institution in many countries."

Euro-skepticism runs deep in national conservative politics around the continent. Britain's Conservative MEP's have formed a caucus with ultra-nationalist parties from Poland and the Baltics including parties that endorse the Waffen-SS memorial marches. Their bond is a deep-seated antipathy to Brussels.

The EU represents a unique experiment in history. It's greatest success has been in helping countries make the transition from dictatorship to democracy. Not just since the fall of the Wall, but going back to the 1970s when Spain, Greece and Portugal all shed dictators and emerged as modern democracies, in large part by adhering to EU rules and receiving EU funds to help re-build infrastructure.

European Parliament president Martin Schulz says, that the same process is now at work in the Commission's dealings with Hungary. "The European Union will continue to exert a major force for democratic and economic change in Eastern Europe."

The question that hangs over Schulz and other pro-Europeans is, What if the democratic will of many in the eastern borderlands is racist and xenophobic? What can be done then?