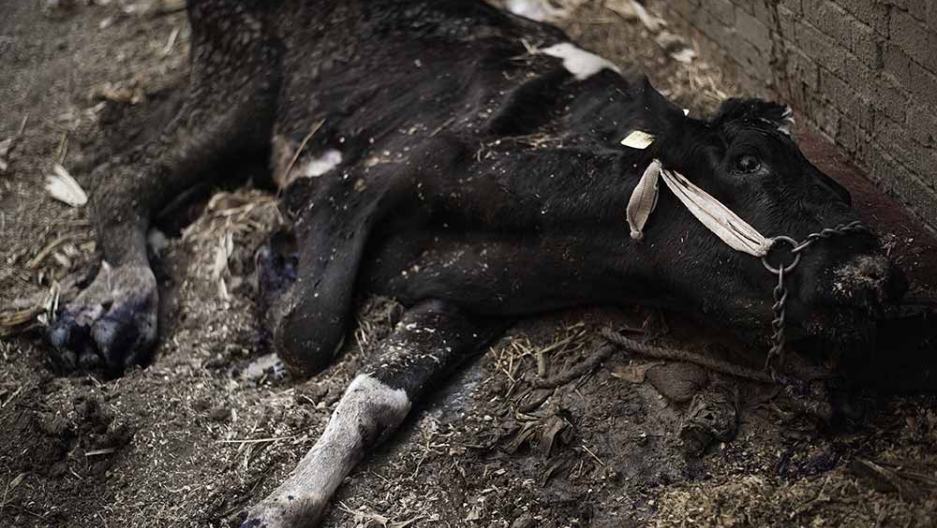 A cow affected by the foot-and-mouth disease lies on the ground at a farm in Ezbet al-Galayla on the outskirts of Berket al-Sabaa village in the Egyptian Nile delta province of Al-Minufiyah on March 23, 2012. The Food and Agriculture Organisation (FAO) warned of a major new foot-and-mouth outbreak in Egypt which could threaten the whole of North Africa and the Middle East. In Egypt, official estimates speak of more than 40,000 suspected cases, with more than 4,600 animals, mostly calves, already dead.
Credit: Gianluigi Guercia
Share

Up to 100,000 Egyptian cattle are suspected to have been infected by a new strain of foot and mouth disease that is sweeping the country, according to Agence France Presse. Based on numbers provided to AFP by Egyptian farm authorities, about one tenth of the suspected infected population has already died.

Foot and mouth disease affects cloven-hooved animals such as cows, sheep, and pigs. It does not spread to humans, but it does render animal milk and meat unfit for consumption, threatening regional food supplies and the livelihood of the farmers who depend on animal husbandry for their income.

"Although foot-and-mouth disease has circulated in the country for some years, this is an entirely new introduction of a virus strain known as SAT2, and livestock have no immune protection against it," the United Nations Food and Agriculture Organization (FAO) said in Rome, according to Reuters.

The National, an Abu Dhabi-based newspaper, sent a dispatch from Al Shawaye al Malaq, one of the hardest-hit villages in the Nile River Delta. Nearly 5,000 animals have died there. One farmer's milk output has dropped 80 percent. A vaccination campaign, which protected against an older strain, was "ineffective."

According to the paper, the virus "causes a high fever for two or three days, followed by blisters inside the mouth and on the feet that may rupture and cause lameness."

More from GlobalPost: Will Egypt's military council turn into a pumpkin?

The FAO estimates that 6.3 million cows and buffalo and 7.5 million sheep "are at risk in Egypt." To help slow the spread of the disease, farmers are advised to "limit animal movement, avoid buying animals, and to burn or bury the carcasses of dead animals," AFP wrote.

Reuters said "joint efforts" are urged to help Egypt develop a vaccine to combat the outbreak.