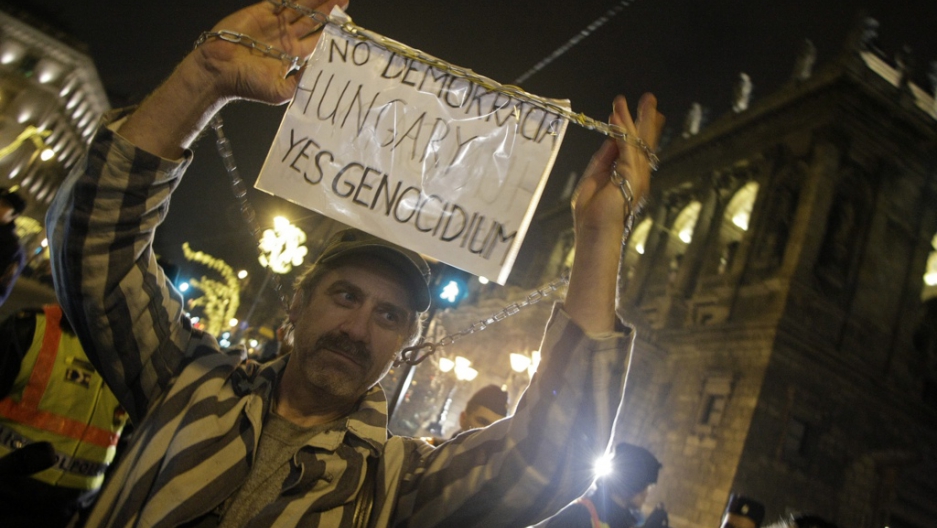 This is the first story in a five-part series exploring the rise of the far-right in eastern Europe. In part one, the political battle over an historic theater highlights growing anti-Semitism in Hungary. Part two examines the growing popularity of Svoboda, a far-right party in Ukraine. Part three visits a popular Ukranian restaurant designed to ridicule Jews. In part four, the EU considers what it can do about far-right extremism in its domain, and part five takes a broader look at the problem across the region.

BUDAPEST, Hungary — First went the director, then the prima donna.

A political tug-of-war over an historic theater in the Hungarian capital has reignited concerns about growing anti-Semitism in this Eastern European nation.

Budapest’s picturesque New Theater has long been a popular mainstay among the local cultured and urbane, who tend to be disproportionately liberal and include many of the local Jewish community. But recently, a series of firings and resignations have left the popular theater in the hands of avowed anti-Semites, sparking protests and political violence.

The deterioration of the storied theater highlights an emerging trend of rising neo-Nazi sentiment in parts of Eastern Europe. Cloaked in nationalism, the ideology has gained new traction amid Europe’s economic crisis, which far-right politicians have sought to blame on Jews and other ethnic minorities such as the Roma. Those ideas are particularly disturbing to many here, in a country where the second highest number of Jews in Europe were murdered during World War II, and from where the highest number of Roma were transported to Nazi death camps.

Hungary's small Jewish community was nearly eliminated during World War II. Since the beginning of the year, Jews — along with other national minorities — have once again been excluded from the Hungarian constitution's definition of the "Hungarian people." New research from Central European University shows that the number of Hungarians with anti-Semitic views has risen from 14 percent to 24 percent since 2006.

"Ever since the [euro zone debt] crisis in 2009, they've been asking, who's responsible for the crisis? Banks and bankers. And who are they? Jews," said Robert Frohlich, the chief rabbi at Budapest's central Dohany Street Synagogue.

Frohlich was referring to Jobbik, a vocal, neo-fascist political party that he says blames Hungary's Jewish community in messages that are both "encoded and direct." Jobbik is the most popular far-right party in Europe today. It is opposed to big banks and the European Union, and has gained popularity with vehement attacks on the country’s Roma minority. About one-quarter of Hungarian voters currently support Jobbik, making it the second most popular party in Hungary.

The party has been growing in the polls ever since Viktor Orbán’s Fidesz won office two years ago. Fidesz, which has a two-thirds majority in the Hungarian parliament, has changed the political climate in the country, perhaps irrevocably. It passed the new constitution emphasizing Hungarian ethnic identity. Meanwhile, the conservative party has fought with the International Monetary Fund and the European Union over political changes perceived as anti-democratic elsewhere on the continent. And it has failed to improve the Hungarian economic situation, which remains dire — fostering the growth of Jobbik, some opponents assert.

At the New Theater, though, former and current employees and some theater patrons say that the shift toward anti-Semitism has been a combination of the subtle and overt messages from the conservative parties.

But earlier this year, he was forced to step down after his contract wasn't renewed in November by the Budapest City Council, which is dominated by the ruling party, Fidesz. The city council, as the owner of the theater, has been required since the end of the communist era to choose directors for its theaters for four-year tenures. In the past, whenever a director proved to be successful at the job, the contract extension has been automatic.

New applicants for the job were usually only considered if the theater was either in deep debt or if the council was dissatisfied with the artistic performance of the theater.

In Marta’s case neither of the scenarios occurred — the theater was doing well, both financially and artistically.

Even so, a well-known former politician and playwright, Istvan Csurka, was initially appointed artistic director at the theater last November. Csurka was ardently pro-Jobbik.

But Csurka never took up his job at the New Theater. He was forced to retract his nomination after he wrote a rant against Hungarian-American financier George Soros saying that Soros’ projects in Hungary "only serve to keep a well defined section of the Jewish community in power."

Without a contract extension, Marta then stepped down in February, even though an independent panel set up to assess the situation recommended to the mayor that he stay.

Budapest’s mayor replaced him with Gyorgy Dorner, a dramatist notorious for his anti-Semitic views and an outspoken campaigner for Jobbik. The appointment has sparked outrage in the arts scene, and among the Jewish community and other left-leaning Hungarians.

At the New Theater, the change has been marked. Actors, theatergoers and sponsors have since walked away from the once popular theater — as well as its popular prima donna, Lia Pokorni.

"Leaving Budapest's New Theater was a strong setback for me but I just couldn't stay," said Pokorni, who is of Jewish heritage. “[I] could not work with a director who is so strongly associated with radical right-wing theories and emotions.”

Since January, a number of theater personnel have lost their jobs, as the new management – in agreement with the owner, the Budapest City Council did not extend their contracts. Several of those let go are of Jewish origin while others refuse to disclose their religious or ethnic background.

Others left because they believed they would be targeted next, staff insiders say. One, who asked that that his name not be published because of ongoing contract negotiations, said he worries about his job because he believes that his religion now plays a role in the new director’s employment decisions.

This employee said that Dorner told him that from now on, the theater would only employ people who “fear and believe in God.”

Graphic: Extremism by the numbers

"It was never really a question of whether I believed in God or not,” the man said of the exchange. “Rather, I think he just wanted to hint at my Jewish origins, which I did not want to discuss at all."

Clashes outside the theater in early February pitted neo-Nazis against liberal demonstrators in which dozens were injured. Hungary’s far right, which overwhelmingly supports the theater’s new management, has fought against the growing anti-government protest movement in the central European country — and Budapest’s cultural scene — since the beginning of the year.

"I have no doubt about the type of plays the new director will put on the stage," said Katalin Nemeth, a pensioner who has been a season ticketholder at the New Theater for years, but has not bought a ticket this month.

Dorner, who once was the voice of Bruce Willis and Eddy Murphy in many Hungarian movies, calls himself a “radical nationalist,” and says he wants foreign influences off the stage.

“I want to see Hungarian plays being brought onto the stage for Hungarian crowds to cheer," Dorner said in an interview with a local paper.

He has publicly said his vision for the New Theater involves "cutting in on the leftist and Jewish dominated populated theater scene.”

Dorner also plans to stage a play by Csurka, the man initially appointed to run the theater’s artistic program, who has since died. The play, “The Sixth Coffin,” deals with Trianon, the treaty agreed after World War One that left Hungary with just one-third of its former territory.

It is a subject that infuriates Hungary’s neighbors, Slovakia, Romania, the Ukraine and Serbia because they fear Hungarian territorial expansion due to the large Hungarian minorities still living in their countries.

But Dorner has few qualms about raising the subject or doing more to provoke. Recently, he promised to rename the theater “Hatorszag” (Hinterland), a concept, critics say, invokes Hungarian claims on its neighbors’ territory. Budapest’s mayor vetoed the suggestion, but the idea lingers.

Dorner also fired the theater’s lead actor Balazs Galko. While Galko had been silent on political issues, he has been a regular at anti-government demonstrations. These days, Galko recounts how, after he was fired, he was told rather amiably by Dorner that he should not expect to get a job in the Budapest cultural scene in the future.

Dorner's actions outraged Galko, he says. In January, Dorner took to the stage at a demonstration held by Jobbik, and stood next to the party's leader, Gabor Vona, as party members torched a European Union flag.

"This is our message to the European Union if it does indeed want to colonize us: [EU Commission President Manual] Barroso thinks we are idiots, and he treats us like that too — and we won’t take it,” Vona said at the event.

“It made me feel uneasy when I saw Dorner was present at the burning of the European flag," said Galko. "And I wanted to keep my job but I could not just overlook these disturbing changes.”

Charles McPhedran contributed to this story from Budapest.