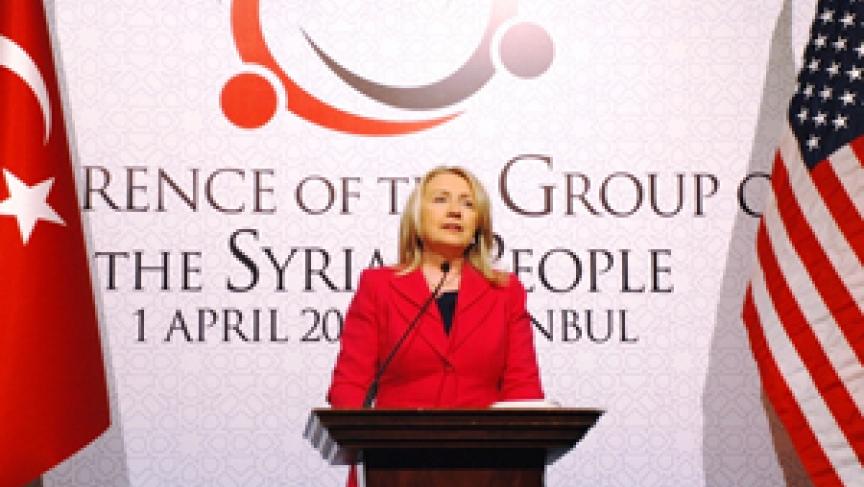 US Secretary of State Hillary Clinton after 'Friends of the Syrian People' meeting in Istanbul, Turkey. (Photo:State Department/ Public Domain)

Share
On Sunday, the "Friends of Syria", a group including representatives from the Syrian opposition and leaders from Arab and Western governments, meet to plan for an end to the conflict in Syria. The Syrian National Council, the largest umbrella opposition group, has been calling for some time now for an international intervention that would include sending arms to the opposition in the country. But in the midst of a conflict that seems to grow bloodier by the day, with the number of casualties nearing 10,000 — there is a burgeoning movement within Syria that believes the regime can be brought down without arms, and is committed to continuing the revolution using non-violent means alone. Back in June, in the early days of the Syrian uprising, Ibrahim Kashoush, a resident of Hama — composed what came to be known as the anthem of the Syrian revolution. The catchy song, "Come'on Bashar, Leave" spread across Syria, and spawned numerous imitations and remixes. Kashoush was reportedly killed by security forces in July, his throat slit and body dumped in a river. But if his killing was intended to scare — anyone off, it had the opposite effect. Activists in Damascus stuffed cassette players and speakers with Kashoush's song in black bags and dispersed them in garbage cans around the city — soon the anthem of the revolution was blaring from street corners around Damascus. And around the country, other activists have been just as creative. From pouring red dye in fountains, to staging massive sit-ins, to handing out dates and roses to soldiers, they say non-violent resistance saves more lives, and in the end is more powerful. "Peaceful resistance is a must; if we use weapons we will not be able to succeed as we do not have enough weapons or soldiers," said Khalaf Ali Al-Khalaf, a Syrian activist from Aleppo. "The military option will increase people's pain. Providing people with arms will only increase death. The opposition must convince those requesting arms that there is a different method of resistance. We are facing an unusual regime so we have to use unusual methods." I met Al-Khalaf in Istanbul along with a number of activists from around Syria actively working on the non-violent resistance movement there. Anmar is another activist. She's from Damascus, but currently lives in Paris, and asked that we not use her last name for her protection. Anmar says, more than just saving lives, non-violent resistance is preserving the spirit of the Syrian Revolution. "So if we are going to be violent we are going to be as cruel as this regime," Anmar said. "How to act against this violence is to show that this violence is ridiculous, and it's not fair… We have to obey all the time the rules — you can't talk about this, you can't talk about this, you are limited in a box, so one of the tactics is the artistic movement, and song is a very important thing. People like it." The hope is that non-violent protest will win over what the opposition believes to be the silent majority of Syrians — those in Damascus, Aleppo and other big cities, who agree with the cause but disagree with the current tactics, and who aren't willing to risk their lives. Ammar says there are small acts of disobedience that anyone can do. "What I usually work on is in Damascus, once people put lights on the windows and there was calls on Facebook saying on this day we're going to light candles for the revolution," Ammar said. "And people started to do it … We are trying all of the time to reach those people, like please what we want is to live together and be one part, and to build our country." Jwad Al-Khateeb, an activist from the town of Kamishlee and spokesman for the United Union of Free Syrian Students, says their goal is to stop business as usual in every university in the country. And so far they've succeeded in shutting down several, and are hoping the University of Damascus will be next. "The revolution in Aleppo was actually ignited at the University first…then spread to the city," Jwad Al-Khateeb said. "We're working on other cities where the barrier of fear still hasn't been broken, to start demonstrations from the universities. The Syrian people are dying, the least we can do is to stop going to class, to say the Universities will stop until the regime falls." More than just bringing down the regime of Bashar Al Assad, Syria's non-violent activists believe that the goal of the revolution is to bring a new spirit of democracy and freedom to the country and that the tactics used in the revolution are just as important as the goal. But whether these activists can convince those calling for a military solution, that the regime can be toppled through non-violent means alone — is another question entirely. "I know that people are scared for their lives and I know that this is very difficult… but I can say this now, that I am not violent, the regime is violent, so I can't be in his shoes, I don't want to be like him," Anwar said. "So I have to create… we have to be more creative to work it out. It might take a long time, but a long time with saving lives, is better."