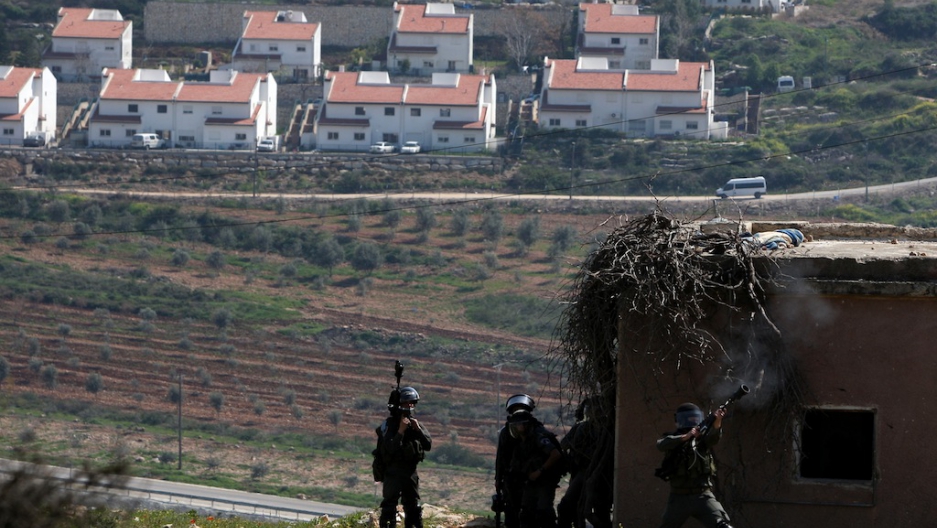 Following a protest of the confiscation of Palestinian land for Jewish settlement in Hallamish, an Israeli soldier fires tear gas during clashes with Palestinian and foreign protestors in the occupied West Bank village of Nabi Saleh, near Ramallah, on March 23, 2012,
Credit: Abbas Momani
Share

JERUSALEM, Israel — Where two villages once stood just inside Israel’s border with Lebanon, the only structures remaining are the two Catholic churches. Former residents of Iqrit and Kafr Bir’im return to worship, marry, and bury their dead. But they can’t move back.

While Palestinian aspirations for a state on the land Israel occupied in 1967 are well known, the importance of land to the Palestinian minority within Israel, some 20 percent of the country’s population, is often overlooked. March 30 is marked by Palestinians as “Land Day,” a pivotal event in their struggle against discriminatory land policies.

In November 1948, the Haganah — the pre-Israel Zionist military force — rounded up the residents of Iqrit and Kafr Bir’im and expelled them. Fighting in the area had already ended, and the villagers put up no resistance. Haganah officers told them that the expulsions were temporary.

In 1951, Israel’s Supreme Court ruled that the state must allow the uprooted villagers to go home. The military then declared the villages “closed military areas,” to defend the border region against armed infiltrators. The court scheduled a new hearing on Iqrit for February 1952, but on Christmas Day, 1951, the army blew up all the houses there. In January 1952, the court decided that the residents of Kafr Bir’in could return once they obtained the military’s permission. The army never granted it, and blew up the village in September 1953. The churches were left standing.

Over the years, a few dozen uprooted families accepted compensation, but the large majority continued their struggle, even as Israel established four Jewish communities on their former farmlands. In the 1960s, the government claimed that allowing the villagers to return would be a security risk, but as Haaretz reported at the time, many of them were working as wage laborers in the Jewish communities established on their lands.

In the 1970s, thousands of Jewish Israelis joined demonstrations for the villagers, to no avail. Subsequent petitions proved futile as well — the Supreme Court rejected the latest one in 2003. The government contends that “returning the uprooted” would “invite a considerable number of suits from all those who want to ‘reopen’ the War of Independence and its results.”

Many other Palestinian citizens of Israel also face discrimination in land rights. Since 1948, Israel has established seven towns for its non-Jewish minority — these, for displaced Bedouin residents of the Negev, are among the country’s very poorest. By contrast, Israel has created more than 700 Jewish communities, in many cases on lands expropriated from its Palestinian citizens.

One expropriation in 1976, of 20,000 dunams (around 4,900 acres) for the expansion of Jewish communities in the Galilee sparked large-scale protests on land issues by Israel’s Palestinian minority. The government had declared a local curfew and warned that teachers who participated would be fired, but there were demonstrations throughout Israel on March 30. Some turned violent, and Israeli forces killed six demonstrators and wounded about scores more. After this first “Land Day,” Israeli Palestinian civil society began coordinating peaceful advocacy against discriminatory land and planning policies.

Thirty-six years later, they still have a long way to go. In March 2010, the government allocated 782 million shekels (US $210 million) over five years to improve conditions in Palestinian minority communities, including housing. But Israel does not officially recognize the existence of many such communities.

Today, tens of thousands of Bedouin from the Negev region live in villages that authorities refuse to recognize or provide with basic services; in 2011, Israel demolished nearly 1,000 “illegal” Bedouin structures, according to an Israel Lands Administration spokesperson. In 2010, by contrast, Israel’s parliament retroactively legalized 60 private family farms that had been established in the region, all but one of which is owned by Jewish families. The farms stretch over 81,000 dunams (20,000 acres), greater than the total area the government allocated to the seven Bedouin towns it established, housing 85,000 people.

Elsewhere, such as in mixed cities like Lod and Ramle, the authorities have refused to zone adequate land for Palestinian minority neighborhoods, forcing thousands of residents to build “illegal” homes that are at risk of demolition. The population of the “Arab sector” today is seven times as large as in 1948, but the land reserves designated for the Palestinian population have been reduced by half, according to the Association for Civil Rights in Israel. There are no Palestinian citizens on the Israel Lands Council, the body that controls land allocation.

Trends are worrying. Last year, dozens of rabbis, including government officials, called on Jews not to rent apartments or sell land to “Arabs.” A law passed in March 2011 sanctioned the practice of local “admissions committees” in small Jewish communities to exclude applicants seeking to move there on the basis of vague “social suitability” criteria that, in practice, communities have used to exclude non-Jews.

When its Palestinian citizens commemorate “Land Day” this year, Israel’s government should take the opportunity to rethink its discriminatory land-use policies.