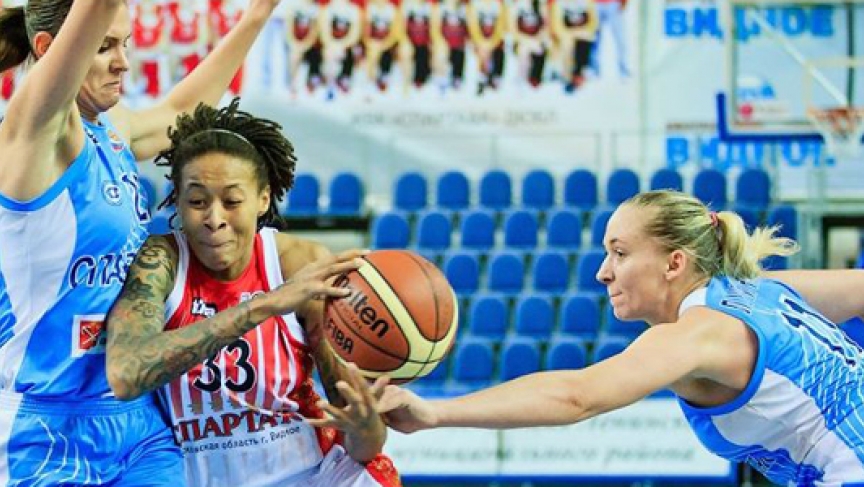 American Seimone Augustus, who plays on the WNBA's Minnesota Lynx, also plays for a professional team in Russia during the WNBA off-season. (Photo courtesy of Spartak.)

The women’s Euroleague championship is being played this week in Istanbul, with a lot of American players on the court.

Three of them play for Spartak Vidnoje, a team has built an enviable record that includes four consecutive European championships. Key to the the team’s s success has been top-ranked American players — and the generosity of a flamboyant owner who met with a violent death.

In a small town south of Moscow, three American women line up on a basketball court with their teammates, casting their eyes toward a Russian flag as the Russian anthem fills the arena. For more than six months a year this serves as their anthem and their reality.

Top talents Candice Dupree, Semoine Augustus and Becky Hammon are stars in the arena. Off the court, though, the women are out of their element. There is the weather, of course. And then there is the traffic.

“I would personally like to have my own car, but I would never drive here, driving is crazy,” Dupree said. “But we call our driver when we need to go food shopping, go to the mall, go to the movies or wherever. We keep them out until five o’clock in the morning sometimes."

A personal driver, on call 24 hours a day might help, but they have still traveled all the way to a land where they cannot speak the language, do not see your family for months at a time and do not have many friends beyond their teammates. Still, there is one reason they are willing to make the sacrifice.

“The money. I mean the money’s great,” Dupree said.

These three women all earn more, up to four times as much, as they do during a WNBA season. On top of that, there are bonuses available as well.

See photos of the women in action at TheWorld.org.

Women have been signing up to play in Russia and Europe for years, trying to augment their income. But Augustus said it hasn't always been easy.

“I have been on teams where we didn’t get paid for two and three months, maybe because the source they were getting the money from didn’t come around. I don’t know what the case was but I went without pay for awhile. This was the first time where I am getting paid on time, I don’t have to hear excuses about money because that’s one of the reasons I came here. If I don’t get paid I can stay in America,” Augustus said.

The fact that Augustus and the others are getting paid regularly and well is the legacy of the colorful, mysterious man who founded the team in 2006.

It has been just over two years since Shabtai von Kalmanovich was gunned down, his black Mercedes riddled with bullets in what police called a contract killing.

Von Kalmanovich had a past shaded with dark moments. He was jailed in Israel for spying for the KGB and suspected of being involved in diamond smuggling in Africa; something he denied.

But in 1990s Russia , von Kalmanovich bought businesses, staged concerts with stars like Michael Jackson and cashed in. It made him a rich man and he did not hesitate to share that wealth with the women on his team.

Coach Pokey Chatman said it was much more than just paying big salaries.

“It was like Disney World in Moscow I guess. And the interesting thing about that was Shabtai left the basketball alone. He wanted to sit on the bench to be a part but he could care less," Chatman said. "He was more excited about making sure whoever’s birthday it was they got some long stemmed roses some nice chocolates or flying the girls to Dubai to get some diamonds or making sure their families could come over — that was extremely important to him."

Von Kalmanovich poured millions into the team, knowing he would never turn a profit. So when he was murdered, there was an outpouring of grief.

Team manager Steve Costalas says to this day, they set out a special tribute at each game.

“There’s a pack of cigarettes he used to smoke, a lighter and a little glass with dirt from his grave because he has to watch all the games. He has to be with us in all the games,” Costalas said.

He may be there in spirit, but without von Kalmanovich’s deep pockets, things are not quite the same.

It’s Sunday, just a few minutes before game time and Chatman is giving the team some last minute tips in the locker room. Then it's onto the court, where it looks and sounds like a high-class professional basketball game.

The arena is state of the art with huge video screens and electronic scoreboards. There's a troupe of cheerleaders in skimpy costumes cheering on the sidelines. But a glance into the stands reveals another reality.

Only a third of the seats are filled, even though everyone gets in for free. At courtside, watching closely, is von Kalmanovich’s widow, Anna.

A former player herself, she is trying to keep the team going.

“I try to keep on with the philosophy of my husband. We have now a small budget, not as much money as before, but we do everything to keep a high quality team,” she said.

Spartak has lost two top American players to teams who pay more. Still, Augustus, Hammon and Dupree are standouts on this team — scoring, rebounding, they do it all.

Becky Hammon, is grateful to the team’s late owner for the salary she’s earning now.

“I think Shabtai really laid the foundation of how this organization runs things, really kind of changed the culture of all of women’s basketball," she said. "Since he got involved everybody for other teams had to step up their game. So now we’re getting paid a lot better because of what he did years ago."

Still it’s a hard slog for these women. Strangers in a strange land, between competing overseas and in the WNBA, they end up playing or practicing all year. And even still, the money is nothing compared to what men make in a single NBA season. A top player there can make more than the entire women’s league salaries combined.

Augustus, who will almost certainly represent the United States in the Olympics this summer, folds her long tattooed arms across her lap.

“The money is a big thing for me but it’s also — at some point we might have kids, we might have a daughter that wants to play ball one day and I hope that she doesn’t have to go through what we have go through as far as coming overseas," she said. "Hopefully we can make enough money in the States and stay home, because it really is hard to have to leave your family. Yes it’s the money because our careers are so short we want to generate as much money as we can, but also it’s about the next generation.”

For now though, the Americans will travel where they have to go, where the owners are happy to pay top dollar for top U.S. talent.

And here at Spartak Vidnoje, Shabtai von Kalmanovich’s widow Anna will try her best to maintain the legacy of her husband on a smaller budget.

“I think the goal of his life was to make people happy especially women” she said, with a laugh. “He loved women who worked hard and he was ready every day to make them happy.”

They seem happy enough for now, playing to small crowds through the dark days of winter. Playing to win.