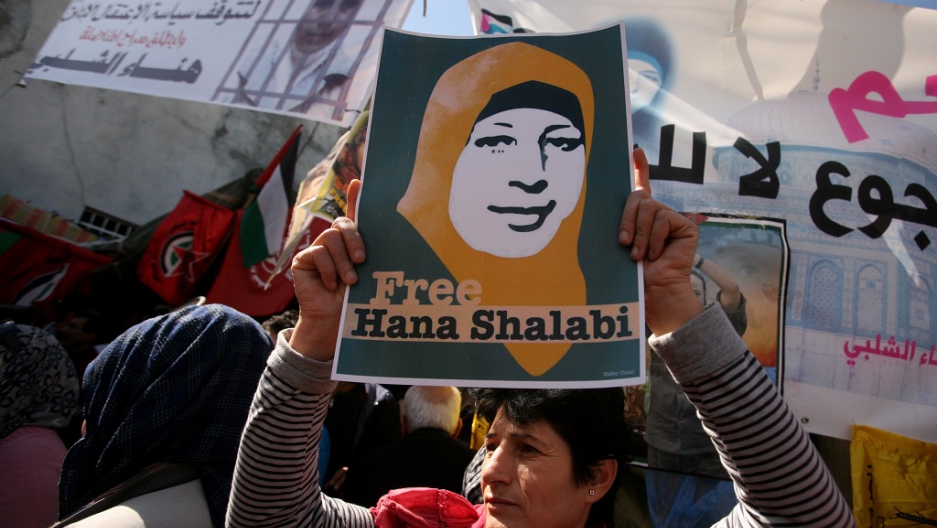 Palestinian women in the West Bank village of Burqin hold up portraits of Hana al-Shalabi during a demonstration demanding her release on Mar. 8 2012, International Women's Day.
Credit: Saif Dahlan
Share

A Palestinian woman held in detention in Israel has ended a 43-day hunger strike and agreed to be deported to Gaza under a deal reached late Thursday, her lawyer said.

Hana Shalabi, reportedly a supporter of the militant Islamic Jihad group, was arrested by Israeli troops in the West Bank in February, according to the BBC.

She went on hunger strike to protest against her being detained without charge, a measure Israel can employ when it deems an individual to be a security risk. After her health deteriorated she was transferred to an Israeli military hospital.

Under Thursday’s deal Shalabi will be exiled to Gaza for three years, although her lawyer, Jawad Bulos, was unsure when she would be moved due to the poor state of her health.

“This is a decision she took, and we respect her for that, but we are against it and don’t support it because we don’t agree with the Israeli policy of deportation and the principle to do that,” Bulos told CNN.

Israel had previously imprisoned Shalabi for more than two years, but freed her in October in a prisoner swap deal that saw Israeli soldier Gilad Shalit released by Islamist militant group Hamas after spending more than five years in captivity in the Gaza Strip, according to Haaretz.

Human rights groups have criticized Israel’s ‘administrative detention’ system, under which as many as 300 Palestinian prisoners considered a security threat are currently being held in jail without charge.

Last month another Palestinian prisoner, 33-year-old Khader Adnan, ended a 66-day hunger strike against his imprisonment in a deal that will see him released on April 17.