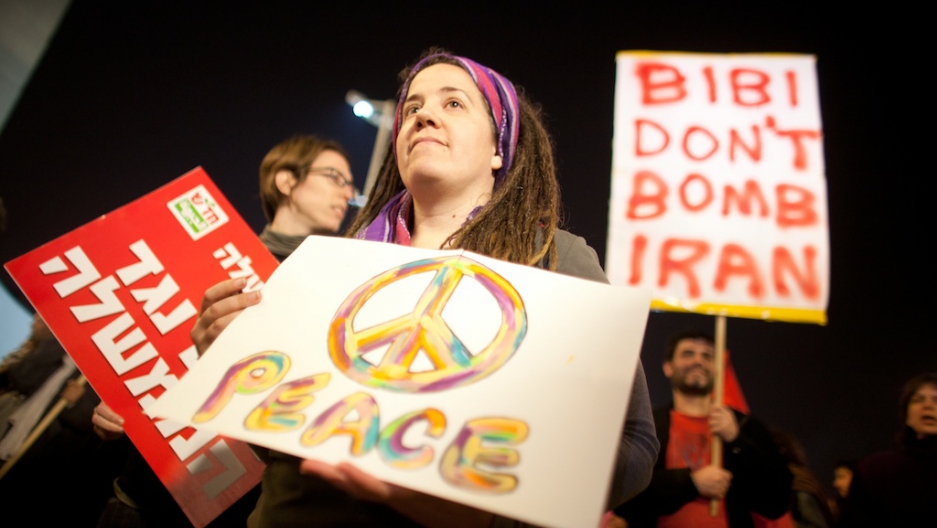 Israelis demonstrate against a possible Israeli military attack and war with Iran on March 24, 2012 in Tel Aviv, Israel. As the balance between war and diplomacy continually teeters, Israel's leaders are afraid that a nuclear-armed Iran is an existential threat and if negotiation efforts fail, Israel could strike this year.
Credit: Uriel Sinai
Share

CAMBRIDGE, Massachusetts – A nuclear-armed Iran would present a dire threat to Israel.

Those of us who are committed to defending Israel must consider the strategies for preventing Iran from developing a nuclear weapon and support the strategy that is most likely to achieve that goal and to maximize Israel’s power and security. There are three elements of a strategy to achieve this objective.

A policy of sanctions, pressure, and threats has dominated Israel’s and the United States’ approaches to Iran for many years. However, if threats and coercion are intended to force Iran to abandon its nuclear program, they are not likely to produce the desired result.

Much of Iran’s motivation to develop an ambiguous nuclear program stems from the belief that Iran faces threats from other countries, particularly from the United States. The escalation of threats, therefore, will only further convince Iran that it needs a nuclear program, either as a symbol of strength, as a deterrent, or as a bargaining chip to gain concessions from its adversaries.

Further, sanctions and threats are strengthening the power of Iranian hardliners and the Revolutionary Guards, the forces that present the gravest danger to Israel. A policy that is centered on pressure will increase the likelihood that Iran will decide it needs a nuclear weapon and that it cannot reduce its enmity toward Israel and the United States. Such a policy will likely make Israel less secure.

Instead, it is more likely to convince Iran to pursue a nuclear weapon as a deterrent against a future attack. A strike is also likely to provoke retaliation, putting the lives of many Israelis at risk. Therefore, an attack on Iran’s nuclear facilities will make Israel less secure in both the short and long term.

More from GlobalPost: Israel & US meet amid rising tension with Iran

The idea of negotiating with a regime that champions hate towards Israel and Jews, denies the Holocaust, and represses its own people is difficult to consider. However, doing so becomes easier if we recognize that negotiating with Iran is the surest way to maximize Israel’s security, because it has the highest chance of producing an Iran that is less threatening and that does not develop a nuclear weapon.

Most importantly, a negotiated agreement can be based on pro-Israel solutions that maintain Israeli supremacy in the region. This involves demands that Iran cap its enrichment to 5 percent, cease activities at the Fordow enrichment plant, deposit its 20 percent enriched uranium with the International Atomic Energy Agency, and institute comprehensive IAEA inspections through ratification of the Additional Protocol that addresses protection civilians are entitled to in wartime.

To secure these things from Iran, Israel and the United States can accept a uranium enrichment capability in Iran, enact Article IV of the Non-Proliferation Treaty (NPT) by agreeing to technological and nuclear cooperation between Iran and the international community, and provide some form of security guarantee including the disavowal of regime change.

These measures maximize Israel’s security. An indigenous enrichment capability brings Iran under the continued auspices of the NPT and the continued oversight of IAEA inspectors. It decreases the likelihood that Iran will develop a clandestine program and makes it much harder for Iran to develop a military nuclear capability. Technological and nuclear cooperation between Iran and the international community has the same effect. Both measures, therefore, increase Israel’s security.

A security guarantee, reduction in threatening rhetoric, and disavowal of regime change will minimize Iran’s conviction that it faces international threats, and will reduce its incentive to develop a nuclear weapon as a deterrent. Further, in gaining a perceived win in negotiations, Iran will have less need for an advanced nuclear capability as a bargaining chip.

Of these three strategies, only the third — negotiating with Iran — can lead to an Iran without nuclear weapons; consequently, it is the best strategy for maximizing Israel’s security.

Annie Tracy Samuel is a member of a family that was instrumental in the creation of Israel and in assuring it has maximum U.S. support. She is the great grandniece of Rabbi Abba Hillel Silver, leader of American Zionism, and the granddaughter of Philip Bernstein, former chief executive of the Council of Jewish Federations (now the Jewish Federations of North America). She is writing a doctoral dissertation on the Islamic Republic at Tel Aviv and Harvard Universities.