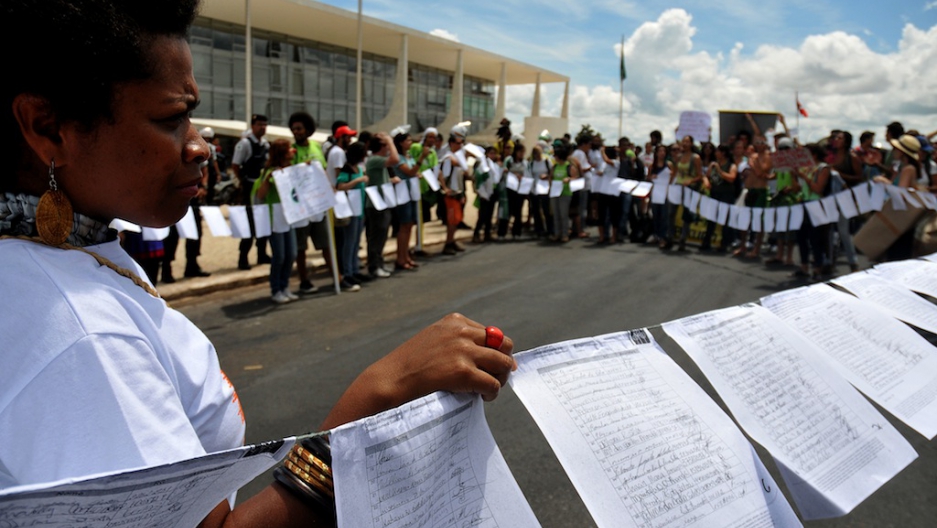 Environmental activists stand behind lists with signatures of more than one million people against the new Brazilian forest code, during a demonstration in front of the Planalto Palace, in Brasilia, on November 29, 2011.
Credit: PEDRO LADEIRA
Share

SÃO PAULO, Brazil — Brazilian police are investigating whether the fatal shooting of three rural activists was linked to their attempt to win rights to land also contested by owners of a sugar mill, reported the Associated Press. Investigator Samuel Barreto said there was no doubt they were executed, shot down as they got out of a car near a landless workers camp in Minas Gerais state.

A 5-year-old girl, the granddaughter of two of those killed, survived the attack, according to the Morning Star. She is now under police protection, reported the Latin American Herald Tribune.

Barreto said police are working on "two lines of investigation" but wouldn't say what they were, according to the AP. No suspects are yet in custody.

The two men and one woman who were shot dead are said to have been coordinators of the Landless Liberation Movement (MLST), reported the Latin American Herald Tribune. The group represents thousands of landless peasants and sometimes engages in land invasions to push its demands for agrarian reform.

Carlos Calazans, head of the Minas Gerais branch of the federal department of land reform (Incra) said the murdered couple had come to Incra last year for support in various land conflicts in the region, including the one with the mill owners, according to the Morning Star.

Watchdog groups said police questioned other MLST activists about the possibility the killings resulted from an internal conflict within the group, but members denied the idea, reported the AP. They instead accused landowners of hiring gunmen to shoot the three activists.

"It's definitely one of the theories for the motive behind this barbarous crime," Calazans said to the AP. "I've no doubt these activists were summarily executed. But police have to follow all leads until they find the truth."

The Catholic Land Pastoral watchdog group said more than 1,150 rural activists have been killed in Brazil over the past 20 years, according to the Morning Star. Fewer than 100 cases have gone to court since 1988 and only around 80 of the hired gunmen have been convicted.