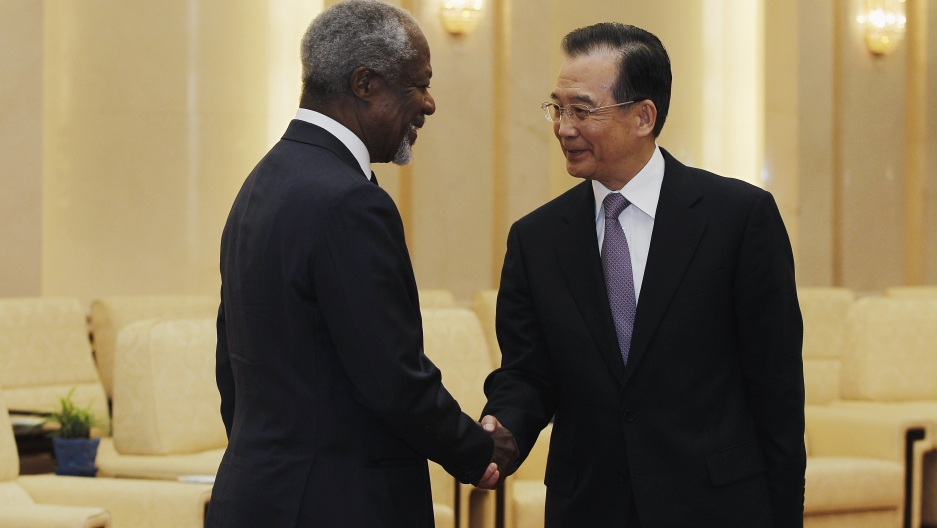 Former U.N. Secretary-General Kofi Annan, left, shakes hands with Chinese Premier Wen Jiabao at the Great Hall of the People in Beijing March 27, 2012. Annan said Tuesday that Syria had accepted a U.N. proposal calling for a ceasefire but efforts had to b

Syria has accepted a United Nations plan that aims to bring an end to the year-long violence that has cost thousands of lives in the Middle East country.

That's according to a spokesman for former U.N. leader Kofi Annan, who is serving as the organization's special envoy to Syria.

The plan includes a daily, two-hour ceasefire to evacuate the injured and provide humanitarian aid and comes as President Bashar al-Assad travels to the besieged Baba Amr neighborhood of Homs to inspect conditions there.

Michael Bristow, a correspondent for the BBC, said Annan's spokesman insisted in a statement that this was an important "initial step" in bringing an end to violence in Syria. But it's just a first step.

"It's not agreeing to his proposal, it's whether they actually do it in the long run," he said. "It remains to be seen which aspects of the six-point plan are actually put into implementation."

This isn't the first time Syria has made promises about ending, or at least limiting, the violence in its country. And at the moment, Bristow said, there are no assurances that this time will end any differently.

Bristow said the whole process has moved quickly, with Annan visiting both Beijing and Moscow to secure Russia and China's support for his proposals. Simultaneously, Syria wrote to Annan to say they too had agreed to the framework.

The key provisions of the Annan plan include (1.) participating in a "Syrian-led" negotiation to address the legitimate demands of the Syrian people, (2.) committing to stop the violence and implement a cease fire on all sides of the conflict, (3.) Ensure delivery of humanitarian supplies through the two-hour daily cease fire, (4.) Release arbitrarily detained people and provide to proper officials a list of all locations where Syrians are being held, (5.) allows journalists into Syria and provide them access throughout the country and (6.) respect the right of people to demonstrate peacefully.