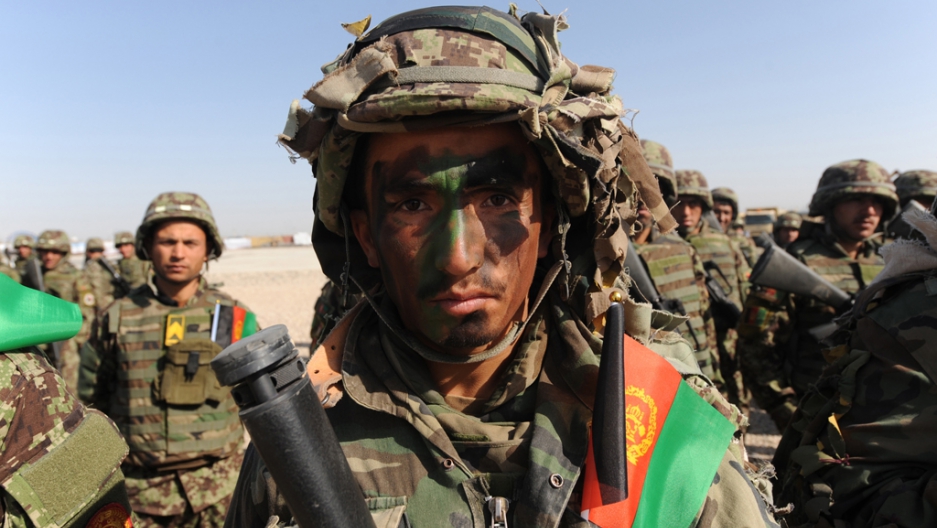 An Afghan National Army (ANA) looks on during a ceremony at Camp Shaheen in Dehdady district near Mazar-i Sharif on March 26, 2012. The latest poll from New York Times/CBS News found that 69 percent of Americans want US troops out of Afghanistan.
Credit: QAIS USYAN
Share

The latest New York Times/CBS News poll released today shows that support for the Afghanistan war has plummeted, with more than 69 percent of Americans saying that the US should not be at war with Afghanistan.

The number is a significant increase from last month, when 53 percent of those surveyed said that Americans should not be fighting in Afghanistan.

The poll found that 68 percent of the respondents thought the war was going "somewhat badly" or "very badly," compared to 42 percent in November 2011, according to The Times.

Republicans seemed to have more positive feelings about the war as compared to Democrats, with 37 percent of Republicans saying the war was mostly successful and 32 percent saying the US fighting in Afghanistan was the right thing, according to CBS. In contrast, 24 percent of Democrats thought the war was mostly a success and only 18 percent thought the US was doing the right thing.

Nearly half of those surveyed, around 47 percent, said they would like US troops to leave Afghanistan faster than the current timetable for withdrawal.

The poll comes in the wake of some of the most violent incidents in the war so far. On March 11, Sgt. Robert Bales allegedly killed 16 Afghan civilians in a village near Kandahar. In Feb., NATO forces inadvertently burned Qurans, sparking violent protests across the country.

Earlier today, a gunman in an Afghan army uniform killed two British soldiers, and was subsequently killed himself, according to the Associated Press.

Kandahar Governor Tooryalai Wesa told Bloomberg that revenge attacks on American soldiers might continue if the ethnic Pashtuns in southern Afghanistan "feel justice is not being restored."

NATO commander, Gen. John Allen, told reporters at the Pentagon on Monday that "I’m not saying things are perfect. But for every bribe accepted, for every insider threat or what is known as a ‘green on blue’ incident — and I think you’re aware that, tragically, we had one overnight as two young British soldiers were killed in Helmand province — for every Afghan soldier that doesn’t return from leave, I can cite hundreds of other examples where they do perform their duties," according to Wired.