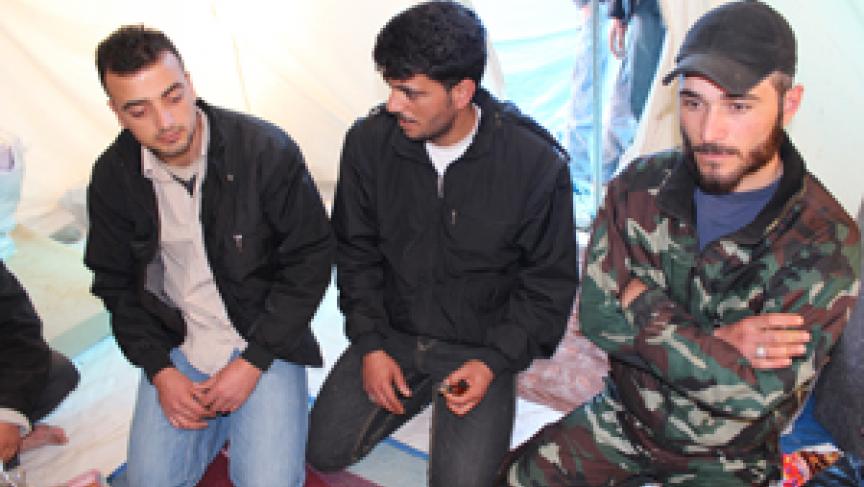 Mustafa Hajyusef, in military camouflage, a fighter with the rebel Free Syrian Army, arrived in Turkey on Saturday, March 17 after crossing the border from Janoudiyah in Idlib province. (Photo by Matthew Brunwasser.)

The conflict in Syria has for months now had all the signs of a mismatched contest. Mustafa Hajyusef, a fighter from the rebel Free Syrian Army, He just arrived in a Turkish refugee camp last week.

His unit was sleeping in the town of Janoudiyah in Idlib province when someone called and said the military was on the way. So they prepared for an attack.

“But we had no idea how big it would be,” Hajyousef said. “When the military came, we were armed only with light arms and they starting shelling the town with tanks and mortars. We couldn’t put up any resistance and had to run away into the mountains.”

Hajyusef said the rebels can’t really put up a fight anywhere in Syria.

“The regime has rockets, tanks, everything. What do we have? Nothing," he said. "Yes, there is some of the FSA left. They haven’t all been killed. But they control only 10 percent of Syrian territory and we are afraid to fight back. We don’t have the organization or the weapons. If someone gets shot he will die because no one can treat him. He only has only God’s mercy."

For observers of modern military conflicts, the situation in Syria is disturbingly familiar. Government pursues its “national idea.” Civilians die by the thousands. Diplomats demand action. Nothing happens. For many, today’s debate about what should be done in Syria echoes the one heard back in the spring of 1992 when the Bosnian Serb army was preparing its campaign.

“It appears to me from what I can read and see about Syria, the only group of people who have learned from Bosnia are those doing the killing,” said Emir Suljagic.

Suljagic was detained in the Potočari battery factory in the eastern Bosnian town of Srebrenica in July 1995. He is one of the few men who lived to tell about it. In Srebrenica alone, about 8,000 were killed in Europe’s biggest massacre since World War II. The UN estimates the same number of people have been killed in the year-long conflict between the Syrian regime and the anti-government demonstrators and fighters.

“If we see how they actually apply this violence in a very organized manner, by cutting off population centers, indiscriminately shelling them, then overwhelming them by force, and destroying the evidence of the crimes they’ve perpetrated, you see Bosnia,” Suljagic said.

The international community failed to act back in the 1990s, encouraging the Bosnian Serb army to act with impunity against Bosnian civilians. The UN security council had been paralyzed by Russia and China, which used their veto to block action.

Ole Solvang, a researcher with Human Rights Watch said the evidence on the ground that we’re seeing is that the Syrian authorities interpreted this as a green light to stamp out the opposition, to stamp out these anti-government demonstrations once and for all, and that they had a short window of opportunity to do so.

But it is still unclear whether a new U.N. plan, brokered by envoy Kofi Annan, will have any impact. The UN’s Human Rights Council in Geneva and the General Assembly in New York have turned up international political pressure. Solvang said economic sanctions are having an impact. And there have been some changes since Srebrenica. The Responsibility to Protect, a resolution passed by the UN general assembly in 2005, requires states to stop mass atrocities. And it allows the international community to step in, if a state doesn’t. But Suljagic is afraid the world won’t get involved unless there’s another Srebrenica-scale disaster.

The Assad government has yet to respond to the Annan proposal. Protesters and fighters have long been saying that the violence used by the government against its people precludes talks. They insist that Assad give up power.

Whatever the diplomats end up doing to stop the bloodshed, it won’t happen fast enough for at least 8,000 Syrian civilians.