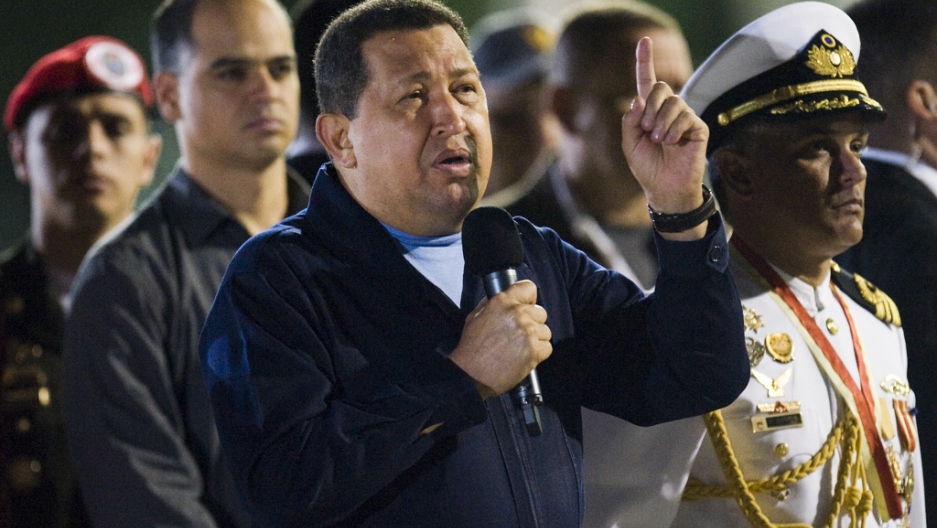 Venezuelan President Hugo Chavez speaks in Caracas on March 24 before departing for Cuba to receive cancer treatment. Hopes are high that he will have an audience with Pope Benedict XVI, also visiting Cuba this week.
Credit: LEO RAMIREZ
Share

Venezuela President Hugo Chavez arrived this weekend in Havana, Cuba, for radiation treatment in his battle with cancer.

The illness is overshadowing both his presidency and the October election he intends to win.

Expectation in Venezuela is mounting over whether Chavez will be granted an audience with Pope Benedict XVI, arriving in Havana as well later Monday from Mexico, a meeting that could help shore up support for Chavez back home.

Many in Havana no doubt would also be excited to see a photo of His Holiness alongside Chavez and Fidel Castro emerge.

Chavez was in Cuba last month for the removal of a cancerous lesion, a recurrence of last year's illness that left the Venezuelan government rudderless.

"Last night I had the first session, fortunately without any kind of problems. Early tonight I'll have a second application ... God willing, I will be in Venezuela on Thursday," Chavez said Sunday on Venezuelan state television.

The president has said that the treatment will take around “four to five weeks.” This comes just as his opponent in this year’s presidential election appears to be gaining ground.

Chavez has invoked Christ and Catholicism frequently in recent months and with the pope coming to town, the timing of Chavez's treatment in Cuba could not be better to cement his Catholic credentials.

The president left Caracas for last month’s treatment in a motorcade with an image of Christ plastered on the front of his car.

“I dreamed a while ago of Christ who came and said ‘Chavez, rise, it is not time to die, it’s time to live,’” the president said the day before that trip.