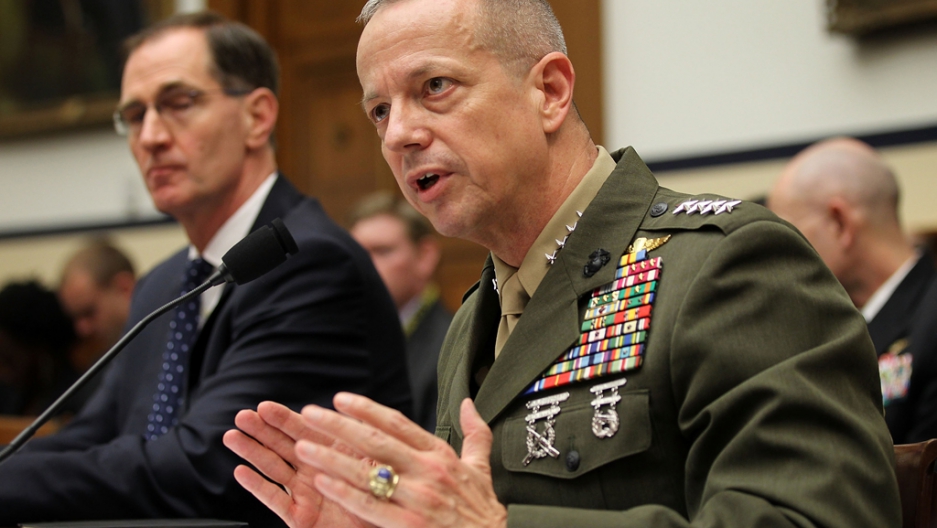 US Marine General John Allen (R), the chief US and NATO commander in Afghanistan, and Acting Defense Undersecretary and Principal Undersecretary for Policy James Miller (L) testify during a hearing before the House Armed Services Committee March 20, 2012 on Capitol Hill in Washington, DC. General Allen testified after the Qurans burning instance and the alleged killing of 16 Afghan civilians by a US soldier.
Credit: Alex Wong
Share

General John Allen, the top US commander in Afghanistan, said Monday that he is investigating the US military command structure there following Sgt. Bales' massacre of 17 Afghan civilians, CBS News reported.

In one of his last public appearances in Washington before returning to Afghanistan, Gen. Allen said that the US is now monitoring for possible revenge attacks following the murders of 17 civilians and investigations into troops burning Korans and urinating on Afghan corpses, according to the National Journal.

“Each one of those was a result of a leadership failure in some form or another,” Allen told reporters on Monday.

No army leaders have lost their command or been punished in relation to any of the incidents, the National Journal reported.

Gen. Allen confirmed that US officials had paid compensation to the Afghan victims’ families, and reiterated that the US Military was investigating Bales' rampage "very thoroughly," according to a US Department of Defense press release.

There has been some speculation that Sgt. Bales' repeated tours in Afghanistan and Iraq had caused the soldier to spiral into severe post-traumatic stress disorder. However, Allen said he does not believe that multiple tours are to blame for the recent series of tragic incidents involving American troops.

More from GlobalPost: 5 major atrocities in US military history

Allen would not go into any details about Bales' unit or the incident.

"I will be satisfied when I get the report that we have looked closely at the potential contributing factors that might have permitted this event to have unfolded tragically," the General said, according to CBS News.

It is still unclear whether Sgt. Bales will face an Article 32 hearing, at which military authorities will determine whether to proceed with charges against him, or whether he will appear in front of a experts to determine if his mental health may be a factor in his defense, CNN reported.

"They have no murder scene, no forensics," Bales' lawyer, John Henry Browne, said, according to CNN. "I'm going to make them prove every claim."

Military law experts acknowledge that proving the case against the soldier may be difficult, especially because there are no autopsies to prove the victims' cause of death. There is also an ongoing dispute about the actual number of victims, and difficulties in getting witnesses to testify, CNN reported.

Gen. Allen also discussed the recent increase in “green-on-blue” violence against US and coalition troops, including the murder of two NATO soldiers by a gunman in an Afghan army uniform in the southern Helmand province on Monday, Stars and Stripes reported.

“Revenge is an important dimension in this culture,” he said, the National Journal reported. “I think that we can all probably assume that with some of the incidents that have occurred within the last several months that has been a potential causal factor.”