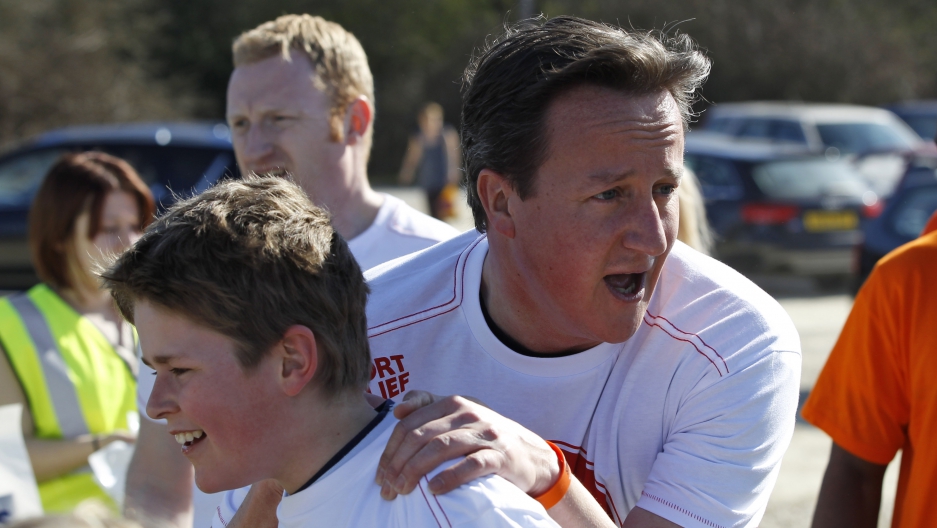 British Prime Minister David Cameron was on a charity run yesterday when word of a serious Tory party fundraising cash for access scandal erupted around him.
Credit: LEFTERIS PITARAKIS
Share

UPDATE: Bowing to pressure, David Cameron has published a list of Conservative party donors who have had dinner with him privately.  Details here.

Just two weeks ago British Prime Minister David Cameron was riding high. He had learned everything there was to know about basketball at President Obama's side during a highly photogenic and successful trip to Washington.

Despite continued tough economic news his Conservative party's poll ratings were up.

But the last five days will be ones he wants to forget.

The government's budget, presented by his closest confidante, Chancellor of the Exchequer George Osborne, has been savaged by his own supporters for raising taxes on retirees - a core constituency for the Conservative Party - while at the same time lowering the top rate of income tax paid by millionaires.

Then yesterday, The Sunday Times, published the results of an undercover investigation, into Tory Party fundraising. Reporters posed as potential Tory donors and secretly filmed the party's co-treasurer, Peter Cruddas, telling them that £200,000 to 250,000 would get them private time with Cameron. That's between $317,00 and almost $400,000.

Because of the Sunday Times paywall I can't link you to the original article, but don't worry, every paper in the country has followed the story up. Here and here are a couple of examples.

Cruddas resigned immediately. Cameron, who was on a charity run as the storm broke turned up in his sweats to face reporters to try and draw a line under the affair. That ain't going to happen.

The Labour Party and the press of all political persuasions wants to know who got an invite to private dinners with Cameron and how much they paid up front for the privilege.

Cameron's amiability has seen him through a lot of mistakes in his first two years in government but watch this space, because this scandal has real dangers in it. He has really angered the Conservative supporting press. Here are some samples from today's papers:

My thanks for those quotes to Conservative Home, a political blog. Editor Tim Montgomerie has made it the voice of the party's grass roots and it would be a brave Conservative leader who ignored Montgomerie's views. The editor is also demanding a full-list of those who have had private dinners with Cameron as a result of big giving.

Rupert Murdoch, who owns the Sunday Times, has poured gas (petrol) on the fire today by using his twitter feed to call for an independent inquiry. Murdoch is no doubt having schadenfreude for breakfast as Cameron, who he backed and with whom he has met privately on a number of occasions, didn't extend himself too much on Murdoch's behalf when the phone-hacking scandal erupted last summer.