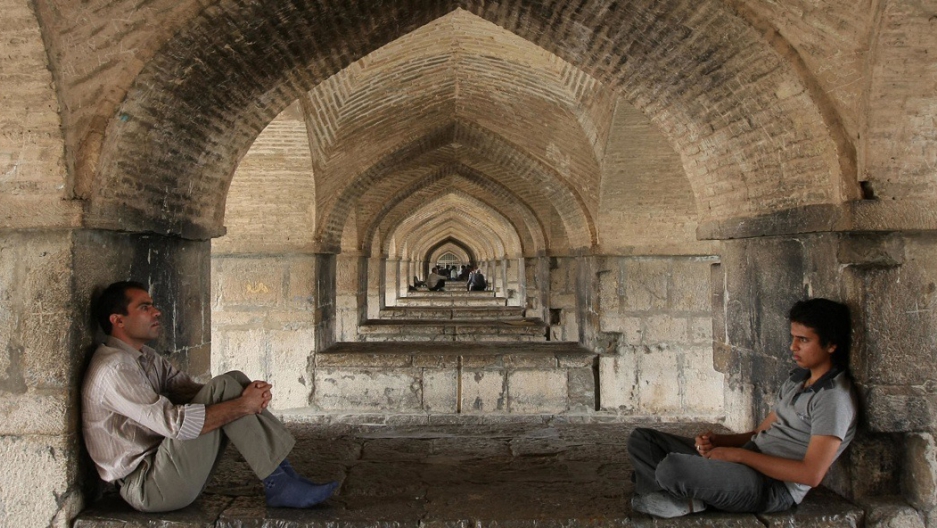 Iranians rest under a bridge in Isfahan, Iran. Residents of Israel and Iran are increasingly reaching out to each other on Facebook and other social media sites to declare their friendship and opposition to war.
Credit: Ehsan Khosravi
Share

JERUSALEM — All the rhetoric about a possible war with Iran began to torment Ronny Edry, a 41-year-old graphic designer from Tel Aviv. The former combat paratrooper asked himself, “Why would I want to attack Iran?”

“It wasn’t so much an idea I had as a desire to react to this crazy thing that’s going on, that we are told the Iranians are about to attack us and we’re organizing to attack them first, and I just wanted to get this out of my system. I wanted to say that I have nothing against them and am not going to war with them and don’t even know them."

So, last week, he wrote out a few words:

"To the Iranian people

To all the fathers, mothers, children, brothers and sisters

For there to be a war between us, first we must be afraid of each other, we must hate.
I'm not afraid of you, I don't hate you.
I don t even know you. No Iranian ever did me no harm. I never even met an Iranian … Just one in Paris in a museum. Nice dude.

I'm not an official representative of my country. But I know the streets of my town, I talk with my neighbors, my family, my friends and in the name of all these people … we love you.
We mean you no harm.
On the contrary, we want to meet, have some coffee and talk about sports.

To all those who feel the same, share this message and help it reach the Iranian people

He didn’t want it to be anonymous, and Ronny is a common name. He wanted whoever saw his virtual message-in-a-bottle to see his face. So he convinced his wife to take his picture out on the balcony with their 5-year-old daughter Ella in his arms, even though the sun was bright and Ella had to squint.

More from GlobalPost: A war with Iran? Iranians don't think so.

He posted the message and the photograph on a Facebook page he and his wife maintain for Pushpin Mehina, a small college where they teach graphic design. “Ok, I did my thing for today and I can go to sleep,” he remembered thinking.

He wrapped his words in a pretty, colorful, kitchy heart.

“I’m a graphic designer, so I’m always making posters before I go to sleep. It’s my way of reacting to what is going on around me,” he said.

“I wasn’t expressing a political position. I was expressing a human position … I just wanted to say what I feel.”

When he woke up the next day, a few people had “liked” his poster. A few more had shared it. On the third day, he received a private message from an Iranian woman. He woke his wife up in the middle of the night with the news.

“Someone in Iran saw our poster!” he recalled telling her.

Out of the exponentially expanding ether of the internet, it seems, peace may yet blossom. By day four, thousands of people had reposted his poster, or a personalized version of it, including hundreds of Iranians — many located in Iran. On that day alone, Edry added 1,500 Iranian friends to his Facebook list. By day six, tens of thousands had participated, in a dozen or more languages.

More from GlobalPost: Stuck in Iran for the holidays

“I’m in shock,” he now says. “This is like a dream. I’m the Israeli with the most friends in Iran. I have mutual friends with Iranians! I know where they are. Until a few days ago Iran was an abstraction for me, with small, frightening Ahmadinejad as their leader, wearing goggles and talking about centrifuges.”

In Israel, this initiative was the talk of the week. It has spawned graffiti and tongue-in-cheek copycat adaptations.

“I should oppose it,” said Yishai Edri, 28, a computer science student in Jerusalem who considers himself a right-winger. “But I just can’t help admiring it. It’s like the Christmas truce, in a 21st century incarnation.”

By day five, Edry was articulating a greater ambition.

“I hope we’ll be able to make some real media buys. Al Jazeera, Times Square … I want this message to appear in places where people will see it, and I want it to really seep in, beyond digital media.”

To that end, he opened a site that accepts donations.

“I always tell my students that graphic design can influence,” he said. “But in the back of my mind, I know it doesn’t really influence. But you can transmit a message, and the message can influence decisions people make. You can influence someone’s state of mind.”

The initiative, conjured from nothing, has fallen into the lap of other Israeli-Iranian attempts at non-belligerent communication.

Just two weeks ago, Soli Shahvar, 50, a professor at Haifa University who directs the Ezri Center for Iran and Gulf Studies, opened a Farsi-language site, to introduce Iranians to Israeli society, “without the deviant vision pushed at them for 32 years by the Islamic Republic.”

Shahvar is among an estimated 50,000 to 60,000 Iranian-born Israelis. Israel has had two military chiefs of staff and one president of Iranian heritage. And about a quarter of a million Israelis identify as ethnically Persian. A man named Kamal Penhasi runs a Farsi-language newsletter called Shahyad out of the bedroom community of Holon, outside of Tel Aviv.

Still, the cynics are out there. Haggai Ram, a professor of Middle Eastern studies at Ben Gurion University and the author of Iranophobia, a study of Israeli attitudes toward Iran that was published in 2009, is skeptical about the internet balloon of love.

“It's better than nothing,” he said. “This warms the heart, especially in the virtual world. But in the end, Israeli society is pretty ignorant about what is going on in Iran. The opposition to an attack on Iran is like a fly buzzing in the government's ear, and it can be flicked away with one hand.”

He is hopeful that a protest against a possible strike on Iran scheduled for Saturday night will draw a larger crowd than the last protest he attended, a month ago, in front of the Defense Ministry in Tel Aviv. At the first protest, Ram said, “there were 24 or us, and two cops for each protestor.”