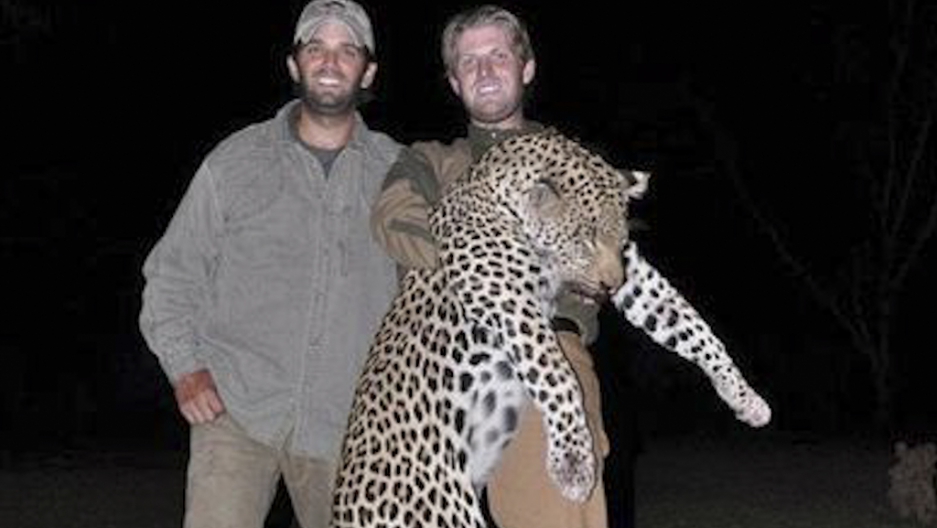 Eric and Donald Trump Jr. pose with a leopard while on a hunting trip to Zimbabwe. Conservationists in Zimbabwe say they are investigating the legality of the hunt. (Screengrab)
Share

Johnny Rodrigues, head of the Zimbabwe Conservation Task Force, told the Associated Press that investigators are checking the legality of the 2011 hunting trip, arranged by a South African company. This includes looking into whether hunting licenses and trophy fees were paid, and whether the company was allowed to be hunting in Zimbabwe.

Rodrigues is quoting as saying that if organizers and hunters breach Zimbabwe's hunting laws, they can face imprisonment or a fine of up to $500,000.

Photos of the Trump brothers posing with an endangered leopard, Cape buffalo, crocodile and other animals were posted on the website for Hunting Legends, the company that ran their hunting trip to the Matetsi area of Zimbabwe, near Victoria Falls.

In one photo, Don Jr. holds a severed elephant tail, while in another, the two brothers pose next to a dead crocodile that has been strung up by its neck in a tree.

"This was not the first time the Trump's hunted Africa [sic] and certainly not the last," the company said on its web page, which has been made password protected since the controversy erupted.

While Don Trump Jr. defended the hunting trip on his Twitter account, his father, Donald Trump, told TMZ.com that he is not a fan of hunting.

But Trump Sr. added that he thought his sons' actions were "100 percent OK in terms of the hunting community."

More from GlobalPost: South Africa: Hunters shoot and pay to save the rhino