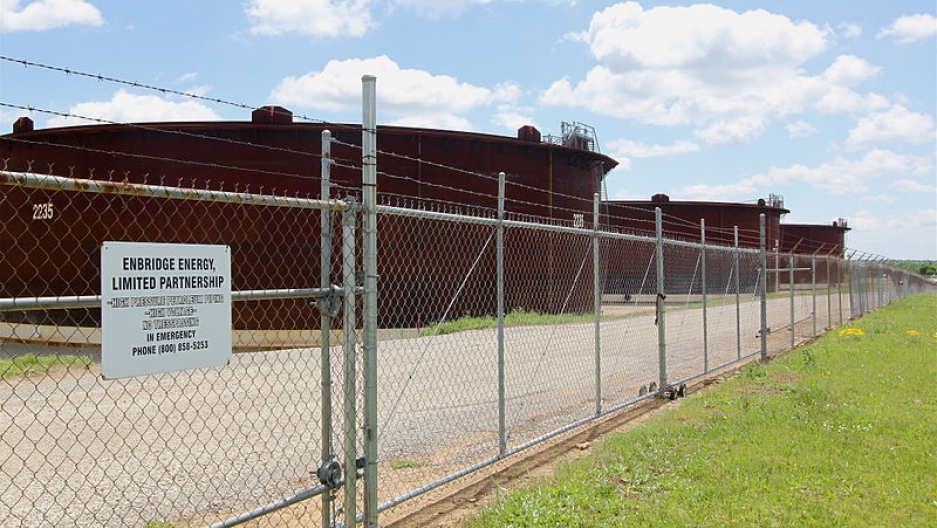 A great deal of the U.S. oil supply passes through large tanks like this one in Cushing, Okla. The stockpiles are growing as more oil is sent down to Cushing but can't be pushed onto refineries on the Gulf Coast. (Photo by Roy Luck. via Wikimedia Com

President Barack Obama on Wednesday kicked off a two-day tour to highlight his administration’s energy strategy in the midst of a dramatic rise in gas prices.

His stops include Nevada, New Mexico, and Ohio, as well as a small city in Oklahoma named Cushing. If you aren’t from Oklahoma, you might not know about Cushing, or why it factors into the president’s energy plans.

Cushing is fairly unique in Oklahoma in that it's at the center of energy distribution — rather than energy drilling. In fact, a lot of crude oil that arrives in Cushing from North Dakota and Canada stays in Cushing. The pipelines to refineries on the Gulf Coast aren't large enough to handle all the oil coming south.

Ben Allen, a reporter from KOSU in Stillwater, said Obama's visit to Cushing enabled him to announce support for the southern half of the Keystone XL pipeline.

"Not the portion that everyone's been focused on. This is the portion from Cushing to refineries in Texas," Allen said.

The Keystone XL pipeline was put on hold because of environmental impact in Nebraska, but, Obama on Thursday said he was making the Cushing to the coast pipeline "a priority" for his administration. This should help remove some of the oversupply in Cushing.

"That should come online in about 2013," Allen said. "He wants to use this as an opportunity to say to Republicans, 'we're trying to do all that we can to lower these gas prices and this is just one thing that I'm doing,' " Allen said.

Carol O’Dell of Oklahoma City until recently owned a ranch just outside Cushing. She said she was glad to have Obama visiting her former hometown. She's glad that Obama's committed to helping move oil out of Cushing to the refinery.

"A little bit's better than the whole thing. We're happy to have him do it. We're glad he's here and we're glad he's going to build the XL pipeline down to Houston," said O'Dell, who said she's a register Republican.

Allen said that though Obama has virtually no chance of winning Oklahoma in the upcoming election, the focus is to try and court voters sensitive to energy prices.

"I think a main focus might be that this is a speech he's giving in Oklahoma but a speech I think he hopes plays nationally into the conversation about what he's doing to get ahold of gas prices and oil," Allen said.