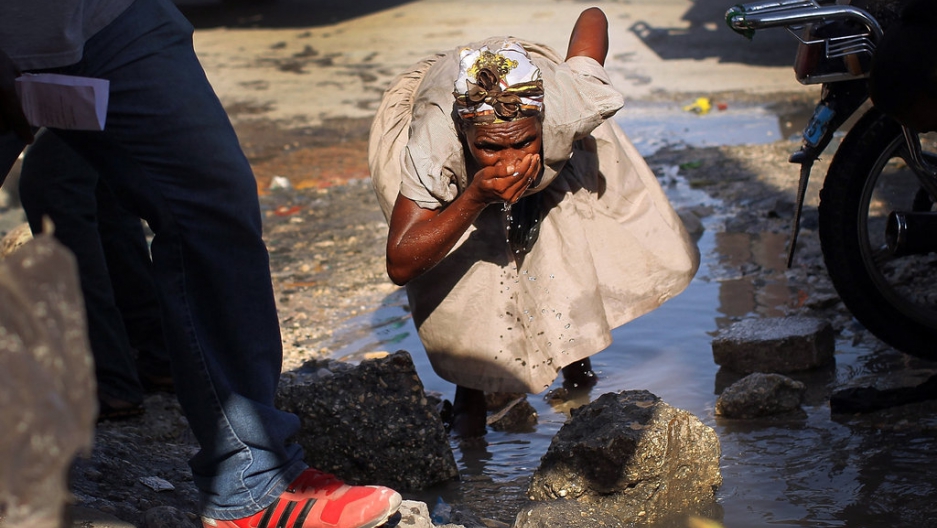 A woman drinks water in the street on March 6, 2012 in Port-au-Prince, Haiti. Two years after the 7.0 magnitude quake that killed an estimated 316,000 people, much of Haiti is still in a crisis situation with tens of thousands living in tent camps in and around Port-au-Prince. A growing concern to international donors is a flare-up between ex-members of Haiti's armed forces and the current Haitian President Michel Martelly.
Credit: Spencer Platt
Share

A.W. Berry is the winner of the Helium-Universal Giving Citizen Journalism Contest "Haiti's Earthquake: Two Years After."Berry is a financial writer with professional experience in real estate and financial services. He has written for various consumer and financial websites has been a regular content contributor at Helium.com.

The faults of Haiti's earthquake relief efforts do not rest with any one organization or factor. If they did, correcting the still-problematic situation would have been far easier.

As AP reported last year, “Lack of coordination among foreign and Haiti relief groups, a destroyed infrastructure, absence of a viable Haitian government and corruption,” are just some of the factors that contributed to Haiti's lackluster earthquake relief. As GlobalPost’s continuing series “Fault Line: Aid, Politics and Blame in Post-Quake Haiti” discovered, there are a number of others.

Breakdowns in the following areas have contributed to the widespread frustration in Haiti, where more than two years after the earthquake only a fraction of displaced people have been resettled in permanent residences and violent crime is on the rise:

According to the United Nations, $4.5 billion in cash was pledged to Haiti for 2010 and 2011, but only $2.38 billion had been disbursed by the end of 2011. Moreover, an NPR report stated disbursements themselves are a problem because “Haiti's reconstruction, like almost everything else in that country, has been privatized, outsourced, or taken over by foreign NGOs.” Accurate assessment of, and proactive planning of pledged funds could have reduced financial complications.

Improved coordination of assistance efforts from the many organizations involved in Haiti relief could have rectified the slow speed of reconstruction. The United Nations Foundation investigated this issue and discovered that information fragmentation was a key source of communication disparity within the relief effort. In other words, both relief work clusters and the United Nations Office of Coordination of Humanitarian affairs were unable to effectively design and integrate information systems in a way that boosted coordinated actions.

The saga of Haiti's Prime Minister Garry Conille, who resigned in February after just four months in office, is a perfect example of the way Haiti’s dysfunctional government has deterred foreign direct investment. As TIME reported, “Thanks to the acrimony between President and Parliament, Haiti went without a Prime Minister – who runs the government and therefore oversees disbursement of earthquake recovery funds – for more than six months after Martelly was sworn in last May. During that time, nervous international donors withheld billions of dollars for reconstruction projects.”

On the other side, as GlobalPost reported, Haitian leaders say the domestic administration has been hampered because non-governmental organizations think they are more efficient at managing Haitian relief efforts.

Security was an issue in preventing successful deployment of aid workers per a Guardian report days after the earthquake warning “chaotic and confusing relief effort is costing lives” as dueling US and UN efforts clashed.

The US deployed 22,000 troops to Haiti in the immediate aftermath and the UN ultimately provided a 10,500-member peacekeeping force. This force has now overstayed its welcome, and as Reuters reported in February, “There has been mounting public unease over the U.N. role in Haiti after recent allegations of rape involving Pakistani soldiers, on top of anger over a deadly cholera epidemic in 2010 linked to the peacekeeping force, known as MINUSTAH.”

The issue provides a clue about how relief distribution should have taken place. If the United Nations or a suitable contractor cannot provide proper security, it might not matter how well organized the rest of the Haiti relief effort was.

The sheer size of the population affected by the earthquake in Haiti was enough to complicate any relief mission. USAID reported the earthquake displaced 1.5 million people and violently struck the entire metropolitan area of the Haitian capital Port-au-Prince. Additionally, due to the extensive damage caused to administrative records such as land deeds made land ownership disputes or verification a substantial obstacle to progress in housing development. Secure international or Web-based digital record-keeping would have prevented the loss of this information.

According to the Centers for Disease Control, an outbreak of cholera added to the complications faced by relief efforts in Haiti. A CDC investigation did not find the relief effort responsible for causing the cholera, but the outbreak did mean an extra variable was added to the already strained relief workforce and their efforts. A more cohesive emergency action plan that included early reconstruction of sanitation infrastructure would have stemmed the spread of cholera more effectively, and reduced related resource allocation complications.

The earthquake in Haiti led to several immediate logistical issues according to data published by AlertNet. For example, massive amounts of rubble from damage to buildings in a heavily urbanized area hampered transport of emergency supplies. Also per Thompson Reuters, shortage of airport space limited the number of support aircraft that could be landed at any one time. To make matters worse Coast Guard ships dispatched to Haiti for evacuation experienced mechanical problems per the Center for Public Integrity.

Rubble removal stalled the rebuilding process for the whole first year following the quake, though the second year has been much more productive.

For any relief effort to benefit those in need, reduction of bureaucratic, legal, and administrative impediments or obstacles is necessary. The Haitian people must also be confident that the relief effort is not a political operation designed to infiltrate the country's infrastructure for this process to be successful.

Coordination of both foreign and domestic relief groups in tandem with environmental, logistical, informational and material support is essential for the improvement of emergency operations.