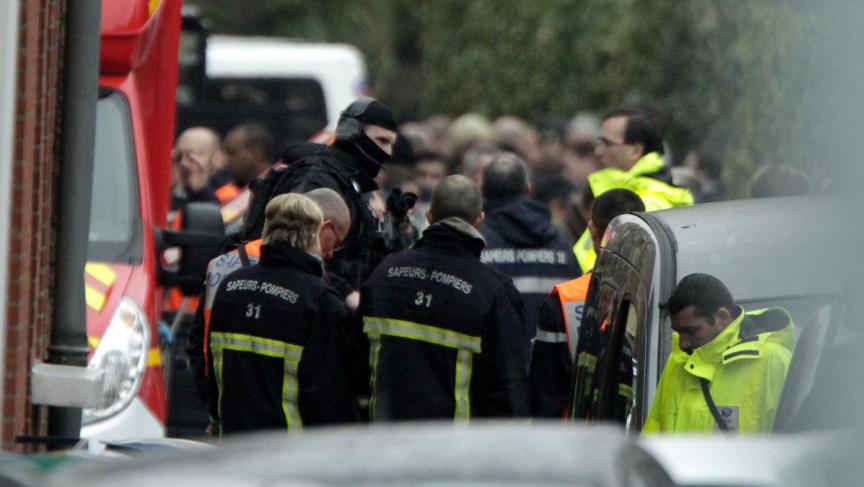 Police forces and firefighters block a street during a raid on a house in Toulouse on March 21, 2012, to arrest a suspect in the killings of three children and a rabbi on Monday at a Jewish school. About 300 police, some in bullet-proof body armor, cordon

French police were locked in a standoff for more tha eight hours with the man suspected of launching an attack on a Jewish school that killed four people on Monday and two attacks that killed three French soldiers last week.

Police launched a raid in Toulouse on the apartment of 24-year-old Mohammed Merah, accordng to various reports, in the early morning hours of Wednesday. Three police officers were wounded in the first raid which eventually devolved into the current standoff.

According to MSNBC, the suspect has linked himself with al-Qaeda and claimed the assassination of the Jewish children was motivated by revenge for the killing of Palestinian children.

"He claims to be a mujahedeen and to belong to al-Qaida," Interior Minister Claude Gueant told journalists in Toulouse, MSNBC said. "He wanted revenge for the Palestinian children and he also wanted to attack the French army because of its foreign intervention."

Palestinian Prime Minister Salam Fayyad said no one should use the death of Palestinian children as an excuse for launching their own deadly missions, according to CNN.

Various reports indicate that another man was also arrested Wednesday morning in France at another location.

Law enforcement officials had several leads, according to reports, that led them to Merah. According to MSNBC, a man went to a bike shop to try and learn how to disable the GPS on his bike. Suspicious, the salesperson notified police and provided them with a description, which police matched to the attacks.

Then, according to CNN, law enforcement were able to track down Merah by tracing back the IP address of the individual who contacted the first victim, Imad Ibn Ziaten, a paratrooper of North African origin, to purchase a motorbike that had been advertised online. The two had arranged a meeting for Merah to look at and buy the bike and Ziaten was killed at the meeting.

According to the French Foreign Ministry, Merah has been followed for some time by France's Foreign Intelligence Service. He's believed to have traveled to Afghanistan and Pakistan over the years, though he's a French citizen, born in Toulouse.

Pierre Haski, a French commentator, speaking to the BBC World Service wondered how Merah could have accumulated the kind of arsenal he did if he was under surveillance.

Merah appeared in court two weeks ago on charges of driving without a licence. His lawyer, Christian Etelin, described Merah's outward behaviour as "gentle, courteous and civilized."

Various reports have said that Merah has indicated he will surrender in the afternoon.