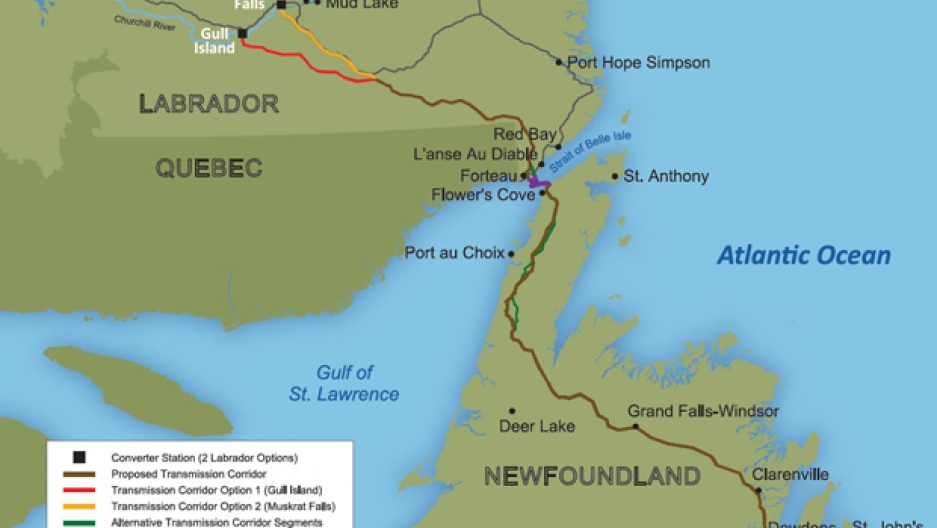 There's no maintained trail down to Muskrat Falls, just a steep, slippery path worn down by visitors and crossed by roots and fallen trees. It ends on gigantic rocks that jut out over the impressive falls that cross the breadth of the Churchill River.

The Churchill is a powerful river that runs more than 500 miles through the largely untouched forests of Labrador, in far northeastern Canada. The interior feels about as far as you can get from just about anywhere, but it's at the center of the ambitions of the government of the province of Newfoundland and Labrador, which includes this huge part of the Canadian mainland as well as the large island just to the east. There's already one big hydroelectric dam on the Churchill a couple of hundred miles northwest of here, and now the province's energy authority, NALCOR, plans to build two more, including one at Muskrat Falls.

The two Lower Churchill dams together would produce over 3,000 megawatts of power, as much as 13 average U.S. coal-fired power plants. Gilbert Bennett, a project manager for NALCOR, says the project is the largest single hydroelectric development currently under consideration in North America.

"From our perspective it's the cornerstone of our province's energy plan," Bennett says.

Some of the power from the project would flow east to the province's population centers on the island of Newfoundland. But even there, the population is pretty small. So after the province takes its share, it would sell the rest of the power to other parts of eastern Canada and the northeastern United States.

The Lower Churchill project would bring badly needed jobs and income to this remote and sparsely-populated province. But many locals say they want none of it.

"These guys have got tunnel vision and got no concern for Labrador," says Alex Saunders, a native Inuit whose family was one of the first to settle in the region of Muskrat Falls. Saunders now lives in Labrador's hub, a town of about 7,500 people called Happy Valley-Goose Bay. He and other opponents here say the project will disrupt water levels below the dam and flood and pollute the river valley above it.

Saunders was recently in the hospital with chest pains, but he got energized talking about the project. He says people on the island of Newfoundland and elsewhere would get most of the benefits, while Labrador would bear all of the costs.

Some of the potential customers for the electricity are asking the same questions. New York State could receive a chunk of the renewable power from the project, but some environmental groups there are opposed to it. The state's chapter of the Sierra Club says it would continue the region's reliance on huge, concentrated and remote energy production rather than local renewable resources like wind and solar, that can be produced on-site.

But some experts say those new energy sources can't yet meet the region's big appetite for electricity.

"It would be nice to have distributed power and have everyone's house generating all the electricity we would need," says Peter Wilcoxen, the Director of the Center for Environmental Policy at Syracuse University. "But we're very far from that point."

Wilcoxen says it will take decades for enough solar, wind and other local renewable resources to come on line, and that in the interim, the U.S. is going to need more centralized power.

But Wilcoxen says that new power does have to be as low-carbon as possible. And for supporters, that's one of the biggest arguments in favor of the Lower Churchill project. Gilbert Bennett of the provincial power authority argues the dams represent a big source of clean energy that can fuel the economy while cutting greenhouse gas emissions.

And Bennett says opponents in Labrador who focus on the dams' impact on the Churchill River may be missing the bigger picture: that climate change caused by pollution from coal and other fossil fuels is already affecting Labrador.

"The winters are later," Bennett says. "The amount of rainfall in December and January is greater, the freeze of the river is later and the thaw is earlier. In Labrador, where you have consistently expected to see cold winters and warm summers, we do see differences."

To supporters, that raises the urgency to build a big, new low-carbon source of electricity like the Lower Churchill dams, the first of which could start to come online in about four years.

But opponents are unmoved by the green argument for the project.

Happy Valley-Goose Bay resident Daphne Roberts lives below Muskrat Falls. She hikes and fishes along the Churchill, and she worries the fish and the views will disappear if the dams are built. And she has a message about the river for the power company.

"I go sit on the riverbank and listen to the birds singing," Roberts says. "I was there just two days ago… and I said you're not going to get it. We're going to fight it. It's not going to happen."

Opponents of the Lower Churchill dams hope they can block its approval by Canada's public utilities board. But if the province prevails, construction could start later this year.