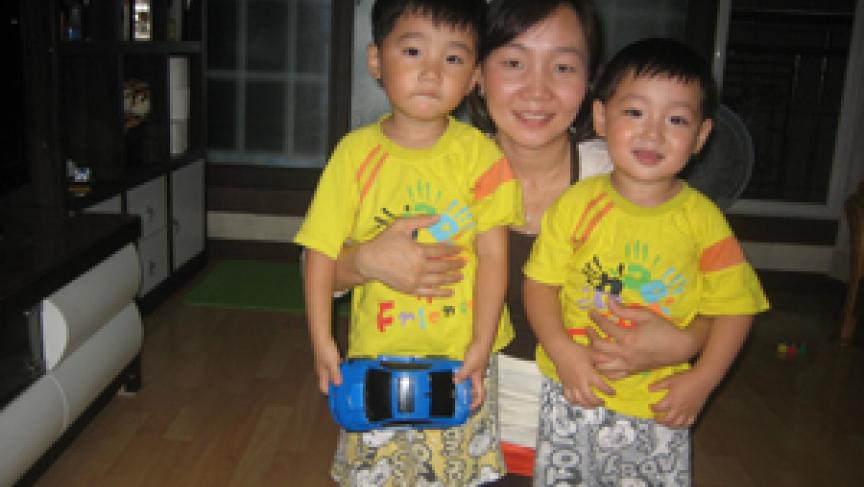 Cultural homogeneity is a source of pride for many South Koreans — but their nation is going through a demographic change.

Over the past decade, hundreds of thousands of Korean men have married women from Vietnam, Cambodia, China and other Asian countries, and the number of children born to these couples is on the rise.

Enkhjagal Khishigbaatar comes from Mongolia, but her two young sons were born in South Korea, like their father. The boys have Korean names and don’t really speak Mongolian, but Khishigbaatar says she hopes they won’t forget their roots.

“I always remind my sons that they are also Mongolian, that they should be proud to be Mongolian," she said.

Mixed families like this are increasingly common in South Korea, according to Hong Inpyo, who heads the Seoul Multicultural Family Clinic.

“Multicultural families are really helping out Korea’s low birth rate,” Hong said. “By 2050 their children will make up 10 percent of the population. These children will be the next generation of the nation.”

Just this month, Seoul opened the Dasom School, the country’s first publicly funded school for multicultural children. Liang Man Ni, 18, who moved here from China in 2009 with her Korean mother and Chinese father, said she likes the school very much.

“I’ve made friends from Japan, Hong Kong and Vietnam," she explained.

So far, Dasom has 48 students who were raised abroad. But soon, school administrators say, they expect to enroll children who’ve grown up entirely in Korea.

Korean authorities say many children from multicultural families aren’t attending school at all, especially in rural parts of the country. A recent survey found that about 30 percent of these children stay home with their foreign mothers, and many don’t learn to speak Korean proficiently.

That has the South Korean government worried, according to Chung Chin-sung, a sociologist at Seoul National University. Chung said she doesn’t want to see these kids fall through the cracks, even if it means educating them in separate schools.

“In principle, children from different backgrounds should be integrated with other students,” she said, “but there are children who cannot adjust to normal school. Without any help they cannot be prepared to get into normal society. I think this school can be a last chance for those children.”

Discrimination is also a factor. Many Korean kids bully their multicultural classmates, according to Kim Heekyung of Save the Children. They’re teased about the way they look or talk, she said. And Korean kids pick up stereotypes from their parents about children with Southeast Asian mothers – for instance, they’re not as smart or they’re poor.

“Southeast Asian countries are less economically developed than Korea. So that’s why they assume they are inferior to them,” she said.

Kim said isolating these kids in their own school isn’t going to reduce prejudice. Last year Save the Children launched an anti-discrimination pilot program in a few Seoul elementary schools. Students acted in role-playing games that had them pretend to be kids from non-traditional families.

Cha Eun-seo, who is 9, said she learned she shouldn’t tease kids with parents from other countries.

She said she and some of her classmates have made friends with a boy from a multicultural family, and they’re trying to teach him Korean.