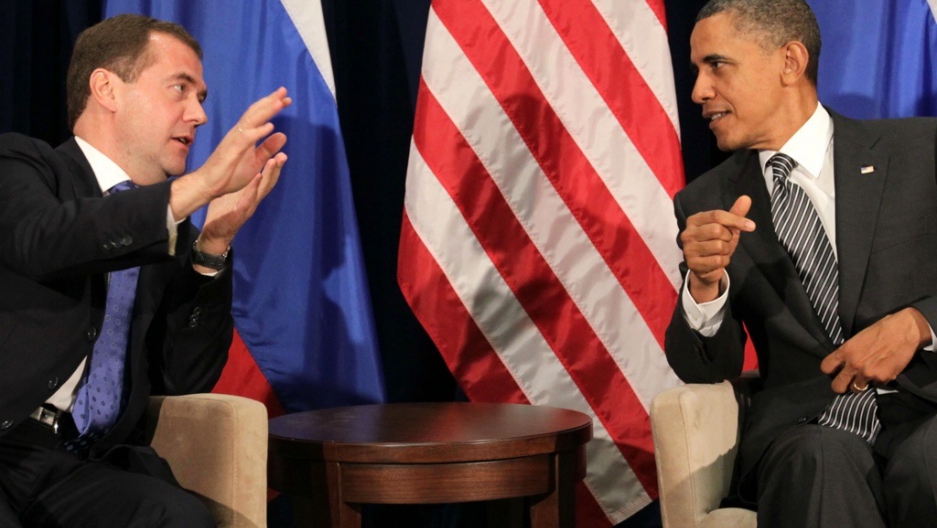 Coordination between Russia and the US, the world's top two nuclear powers, is needed to combat the threat of nuclear terrorism, according to the Elbe Group, which consists of top retired military and security officials from the two countries. Here Russian President Dmitry Medvedev and US President Barack Obama discuss issues.
Credit: Yeketerina Shtukina
Share

CAMBRIDGE, Massachusetts — It would seem that the relationship between the United States and Russia has once again settled into a sour state. Disagreements over missile defense in Europe are creating additional obstacles to a Russia-NATO summit planned for May.

Russia and the US continue to disagree over policy toward Iran and Syria. But behind the front pages, there is significant cooperation happening between the US and Russia over an issue that both countries consider among the most serious facing them — nuclear terrorism.

Next week, on March 26, Presidents Barack Obama and Dmitry Medvedev will meet in Seoul along with 50 other heads of state attending the second Nuclear Security Summit. One of the topics they will discuss is combating the threat from nuclear terrorism, a threat that Obama and Medvedev, and their predecessors, Presidents Bush and Putin, have called one of the most dangerous of our time.

Russia and the US have done much to raise awareness of the threat including forming a Global Initiative to Combat Nuclear Terrorism. But identifying the next steps that countries can take against this new threat has been difficult. Ideas and trust are lacking. This is why in October 2010 a small group of senior, retired general officers from US and Russian military and intelligence agencies formed the Elbe Group.

The purpose of the Elbe Group, named after the river where American and Russian forces met at the end of World War II, is to establish an open and continuous channel of communication on sensitive issues. The group is unique in that it brings together former leaders and members of the CIA and FSB, DIA and GRU (the military intelligence services), and the military and internal security forces.

The first major issue tackled by the group has been preventing nuclear terrorism — a threat that combines the Cold War peril of nuclear holocaust and the 21st century danger of international terrorism.

In May 2011, the Elbe Group participated in creating a first-of-its-kind US-Russia Joint Threat Assessment on Nuclear Terrorism. The unclassified report, published by Harvard Kennedy School’s Belfer Center and the Russian Academy of Science’s Institute for US and Canadian Studies, details the growth of the threat that terrorist groups could obtain nuclear materials.

The report is important because it is so far the only joint assessment of the threat from nuclear terrorism compiled by experts from the two leading nuclear powers. It represents a consensus among intelligence officers, scientists, and military leaders about how terrorists could obtain nuclear materials and use them. As the report concludes, “If current approaches toward eliminating the threat are not replaced with a sense of urgency and resolve, the question will become not if, but when, and on what scale the first act of nuclear terrorism occurs.”

In the opinion of the Elbe Group, the nuclear security summit in Seoul provides an important opportunity to reaffirm US and Russian leadership against the deadly menace of nuclear terrorism. We believe that, as the two leading nuclear powers in the world, Russia and the United States have a special responsibility to do everything in their power to deny weapons-useable nuclear materials to terrorists. Specifically, the governments of our countries should jointly take the following steps in cooperation with other responsible nations:

• We encourage our governments to develop an assessment of the threat from nuclear terrorism to provide a basis for a common understanding of the threat and its component parts.

• Our governments should establish a “domain” for combating nuclear terrorism — recognizing that nuclear terrorism, like nuclear security, should be understood as a cross-cutting issue requiring clearly responsible leaders in the government. Government efforts to prevent nuclear terrorism would benefit from clarification of the architectures for addressing this domain.

• We suggest that the US and Russia increase coordination between special services in the interest of providing better warning about terrorist threats, with priority given to preventing nuclear terrorism.

• The catastrophe at Fukushima, which was the result of an accident, could happen again as the result of intentional actions by terrorists. US and Russian relevant government agencies should lead international preparation for interdiction and consequence management of such acts.

• US and Russian governments should continue to allocate resources to sustain and strengthen efforts to combat all forms of terrorism, in particular nuclear terrorism.

There are, of course, issues over which the members of the Elbe Group disagree but all agree that preventing nuclear terrorism is a priority for joint action by our two countries. By vigorously and diligently confronting common threats, the US and Russia can build the mutual trust that will lead to cooperation and agreement on other sensitive issues.