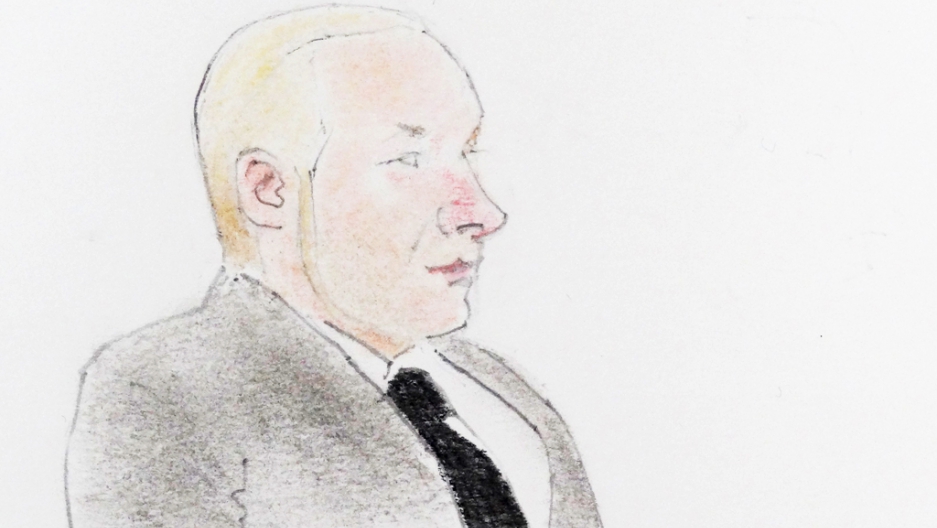 A drawing of terror suspect Anders Behring Breivik during a hearing at the Oslo courthouse, on November 14, 2011. The Norwegian gunman killed 77 people in twin attacks on July 22, 2011, explaining that his massacre was a 'preventive attack against state traitors.'
Credit: Roar Lund
Share

The trial of Anders Breivik, the anti-Islamic extremist who killed 77 people in a gun and bomb rampage last July in Oslo, Norway, is getting more and more paradoxical.

When Breivik goes to trial next month, he wants his defense lawyers to argue that he is sane, meaning he’s likely to get 21 years in prison.

The prosecution, meanwhile, plans to treat him as insane, and argue instead for compulsory mental treatment.

“Most people in his situation want to be declared insane, because they want to escape,” Breivik’s lawyer, Odd Groen, admits. “The only thing that means anything to him now is that he’s declared sane.”

According to Groen, Breivik believes his killing spree was “necessary” to bring attention to his manifesto, an ideological text designed to alert Norwegians to what he believes is an imminent takeover by radical Islamists. If people believe his manifesto is nothing but the ravings of a paranoid schizophrenic, his reasoning goes, then he will have killed his victims for nothing.

Breivik sees himself as a hero.

Last month, in open court, he demanded he be given Norway’s highest military honor for work against “traitors.”

Breivik’s obsession with proving his sanity might seem to run contrary to his own interests.

But Sven Torgersen, a psychiatrist who has criticized the court’s classification of Breivik as schizophrenic, believes the self-confessed killer could be playing a clever double game, a sort of "Catch 22" in reverse.

In Joseph Heller’s novel of that name, the main character, Capt. John Yossarian, wants to escape the military by being declared insane, but fails when the doctor argues that that is exactly what a sane man in his situation would want to do.

This, Torgersen suggests, is what Breivik wants to avoid.

In November, Torgeir Husby and Synne Soerheim, the two court-appointed forensic psychiatrists, concluded that the 33-year-old was a paranoid schizophrenic.

Among other evidence, they cited his claim that he is a Justiciar Knight Commander of the Knights Templar order; his frequent use of neologisms, such as “anarcho-nationalist” or “suicidal humanitarian;” his isolated life alone at his mother’s house; and his apparent belief that he can know the thoughts of others.

Torgersen, who lectures at the University of Oslo, and Randi Rosenqvist, another prominent criminal psychiatrist, both disagreed with the diagnosis.

“You have to have bizarre illusions that some people from Mars or Venus are influencing you, that you get some message from the television, that some part of your body is being taken away from you,” Torgersen says of true schizophrenics. “If you don’t have these ‘science fiction’ thoughts, then you must have a lot of hallucinations. Breivik, in my view, has no schizophrenic symptoms at all.”

Rosenqvist said it was very rare for a schizophrenic to be able to plan a crime as meticulously and over as long a period as Breivik had done.

When asked to write a report on Breivik for Ila Prison, where he’s being held, she compared him instead to members of extreme groups like the far-Left Baader-Meinhof Gang of the 1970s.

"I interpret his deviant statements as an expression of an extreme ideology, not as a psychotic view of reality," she wrote in her report.

“The Baader-Meinhoff Gang’s ideas of what is right and wrong in society were not shared by most people,” she continued. “But nobody said they must be insane.”

Comparison can also be made with the four US militia members who carried out the Oklahoma bombing in 1995, killing some 169 people. Timothy McVeigh, their leader, also got his lawyer to argue that the bombing was “necessary,” saying he faced an “imminent danger” from the US government. No one at that time argued that he had been insane. He was executed in 2001 by lethal injection.

Breivik himself seems pre-occupied with the relation between sanity and extreme politics.

“What do you think about the justice minister’s forced resignation after the Second World War?” Breivik asked Husby and Soerheim, the court-appointed psychiatrists, when they first met him. He refused to be interviewed until they answered.

The minister he was referring to, Sverre Risnaes, helped Norway’s Nazi occupiers send hundreds of Norwegian Jews to death camps. But after the war, he had treason charges against him dropped on the grounds of insanity, and was committed to an asylum.

There are clear reasons why Breivik’s case is different from that of other extremists, such as the Baader-Meinhoff Gang.

For a start, it looks like there is no gang. Breivik was in Facebook contact with extreme anti-Islamic groups, many of which employ a similar language, talking about Crusaders and jihad. But he seems to have planned his “operation” alone.

Police have yet to find any evidence of the inaugural meeting of the Knights Templar Breivik claims to have attended in London in 2001, nor of the other 12 members of the group who attended it, nor of the two other Knight Templar sleeper cells Breivik claims exist in Norway.

“That’s of course why the police have used a lot of resources in the investigation,” Rosenqvist says. “I don’t know if Breivik was part of some kind of an organization. What is sure is that Breivik’s ideas about society are not that original.”

Rosenqvist suspects that, in the age of the internet, extremists no longer need physical contact with others to be subsumed into a warped ideology.

She also believes that the underlying question in the case may turn out to be one that US and European psychiatry is ill-equipped to understand.

“I believe that European and American psychiatry has very little theory on how extreme ideas turn into psychotic ideas,” she says. “We’ve been scared to say that people with peculiar religious ideas or peculiar political ideas are insane, because we don’t want to be like the Soviets, who sent their dissidents to psychiatric institutions.”

Breivik is presently under 24-hour surveillance by a second team of psychiatrists, after lawyers representing victims' families spoke out against the conclusion of the first report.

According to Groen, Breivik is cooperating, doing everything he can to be declared sane.

“He’s trying to be a bit more calm about his ideology and explain it even more, so they can understand it’s not insanity, it’s just his political views,” says Groen.

On April 10, less than a week before the trial, the new team will issue its findings.

“If this report says that he’s sane, it will change the whole case,” Groen says.

If Torgersen’s suspicion that Breivik and his lawyers are playing a reverse “Catch 22” has any truth to it, then presumably they’ll have to flip around completely, and start to argue that their client might not be quite as rational as they at first thought.