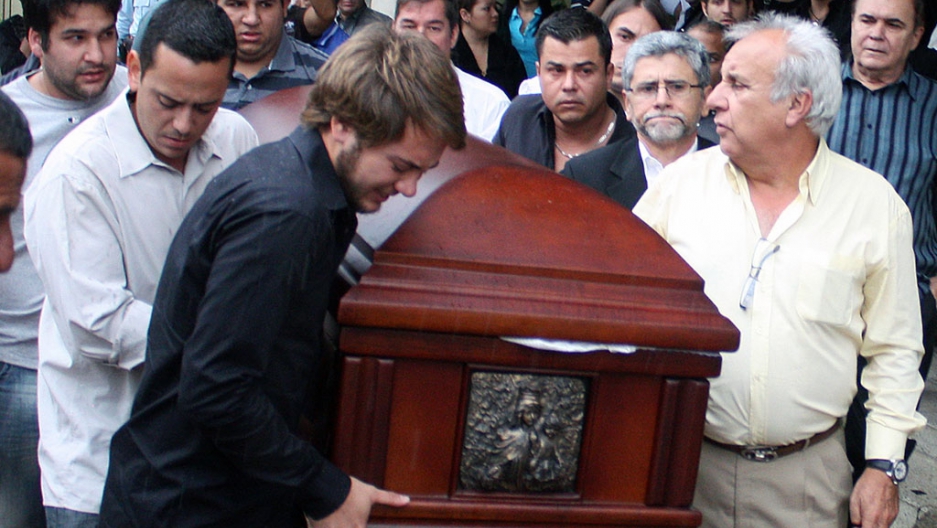 Chilean Consul Fernando Berendique (R) carries, with relatives and friends, the coffin of his daughter Karen Vanessa Berendique, who was shot dead earlier on March 17, 2012, in her car in a confused incident that is being investigated by the prosecution, in Maracaibo, state of Venezuela.
Credit: STR
Share

CARACAS, Venezuela — A Chilean diplomat's teenage daughter was killed by Venezuelan authorities on Friday in a chilling reminder of the country's issues with security and a police force that many believe is part of the problem.

Karen Berendique, 19, was killed as officers opened fire on a car she was traveling in, in the western city of Maracaibo. Her brother who was driving failed to stop at a police checkpoint, leading officers to open fire, according to local newspaper Panorama.

Berendique was hit by three bullets, according to Venezuelan authorities, who have arrested 12 officers and launched a criminal investigation.

The teenager was the daughter of Fernando Berendique, Chile's honorary consul to Venezuela who has lived in the country for three decades.

Chilean authorities have condemned the killing and have requested clarification of the events at the earliest possible opportunity.

Venezuela has one of the highest murder rates in the world, competing with some war zones. The police are thought by many to be at least partly to blame for the problem, failing to win over trust thanks to incidents like this one.

"They shoot first and aim later," Ricardo Sanchez, an opposition lawmaker, said at a news conference Sunday, reports the Associated Press. "Crime is killing us," said Berendique, the father of the victim. "I don't think Venezuela deserves this."

Insecurity is a major political issue for President Hugo Chavez, who faces elections in October. The murder rate was around 60 per 100,000 people last year, according to the Venezuelan Violence Observatory.

This is not the first diplomatic incident that is down to the country's startling crime figures. In January, Mexico's Ambassador to Venezuela Carlos Pujalte was kidnapped with his wife as they drove through a wealthy part of Caracas. They were found the next morning in one of the city's slums.