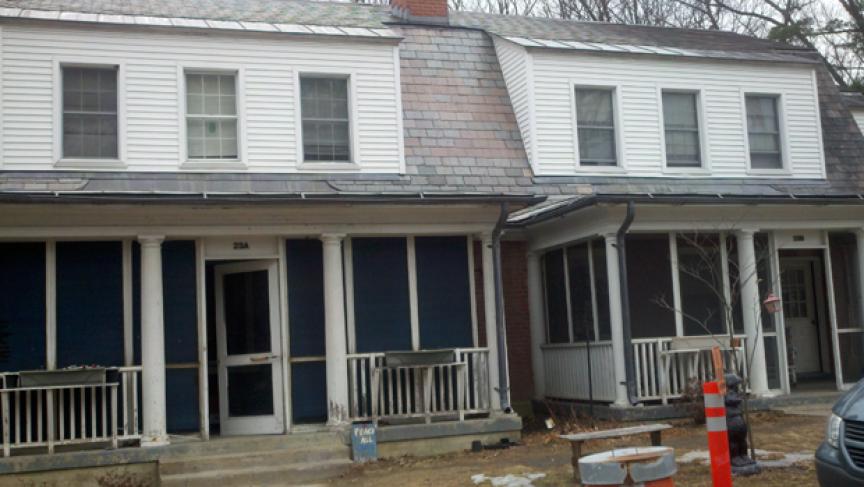 Jackie K's House is a homeless shelter for women vets run by a non-profit organization called Soldier On. (Photo by Susan Kaplan.)

Editor's note: This is part of a special series from PRI's The World focusing on the lives of veterans who have returned from Iraq. See more stories from the series at TheWorld.org.

Women have served in the Iraq and Afghanistan conflicts in unprecedented numbers making up eight percent of U.S. veterans.

Both in deployment and at home, female veterans face challenges their male counterparts don’t. That includes a Veterans Affairs department that’s just beginning to figure out how to take care of them.

Jackie K’s House is a small duplex cottage run by a non-profit called Soldier On, at the VA in Leeds, Mass. It’s one of only a handful of homeless shelters exclusively for women vets. And there’s often a waiting list to get in.

“There’s a lot of trauma in the house, and a lot of PTSD,” said social worker Laurie McGrath.

It’s not easy for 11 homeless veteran women to live together. But life at this shelter offers a respite from the streets. It offers security. And there’s an almost homelike atmosphere. But despite constant efforts to make the house feel like a home, McGrath said reality is the women here are suffering, badly.

“They aren’t choosing to live with these people. And they come in in crisis and even something as simple as a door slamming can trigger somebody,” she said.

Somebody like 21-year old Christianna Carrero, who enlisted in the Army National Guard at 17 during her senior year in high school. She said she was star struck by the military. She liked the uniforms, the parades, the marching, the guns. She figured the military would put her though college and provide job security. And then the letter arrived.

For more video stories on the leadership role of women around the world, visit WomenAndGirlsLead.org.

She shipped out to Iraq in July 2009. Once there, she found even the basics were hard. There’s a requirement for women soldiers to travel in twos at all times; and one day she and her battle buddy tried to get into the bathroom. But the door was locked.

“The men’s bathroom wasn’t locked,” Carrero said. “It was just the women’s bathroom. And they didn’t even try to sugar coat it. (They said) ‘yeah we’ve had a couple of rapes so that’s what we had to do.’”

Carrero was given a combination code for the bathroom door.

“I’m like, oh, but all the men in the housing authority know it. That makes me feel safe,” she said. “You better believe that I showered with my rifle on the towel hook.”

Then there’s the fear and anxiety caused simply by being in a war zone. You don’t see people with half of their bodies blown off in a regular hospital in a city.

Amy, who preferred not to use her last name, did three tours in Iraq. She said none of her experiences as an emergency room trauma nurse in the states prepared her for wartime medicine, beginning with her first patient.

“We removed a body from the stretcher that they were on (and moved it) to our hospital stretcher, and his arm came off. And I kinda stood there bewildered. Somebody ran up to me and grabbed it out of my hand," Amy said. "Within two weeks I was, like, ‘Oh, body parts, I need a red bag.' You just become very hardened and very used to it really quick because you have to.”

Amy said she started drinking heavily in Iraq. Alcohol was officially banned, though she claims it was easily available. But it wasn’t a problem through the three tours. Then she got home.

“My kids would come up to me and look at my soda and say 'mommy can I have a sip or is there booze in there?' ” she said.

Amy suffered from PTSD, but, like so many of her peers, was in denial. She got into trouble at home. And at work.

Amy ended up trying to commit suicide, lost her nursing license and was thrown in jail after three DUI arrests. She’s staying at Jackie K’s House on parole.

In addition to the stresses of being a soldier, Amy said women are often preyed upon by their male colleagues. A big part of the problem, for Amy and the others, is that they’re women. And there’s often nowhere to turn. Once home, women find the VA is a bastion of care for male vets. But not for women. Or families. And while things are changing, officials acknowledge many of the improvements fall short.

Connecticut’s Commissioner of Veterans Affairs, Linda Schwartz, said: “There are too many women willing to serve, and they are doing a good job, and they’re very important to the whole defense posture of this nation.”

Schwartz said post-combat problems aren’t unique to women, but they do hit women especially hard. And that’s why shelters like Jackie K’s House are needed. Not only is the shelter exclusively for women, but all the employees are women. Schwartz said this is vital to the women's recovery.

“You can’t mainstream them and say, ‘OK, you’re going to in there and sit with these men.’ More than 25 percent of the women in the military have experienced sexual harassment or sexual assault. We need to maintain the special clinics,” Schwartz said. “There are too many women willing to serve and they are doing a good job and they are too important to the defense posture of this nation.”

But that’s not the message being heard by thousands of homeless women veterans who leave the military and find the doors shut on what they had hoped would be a soldier's welcome home.