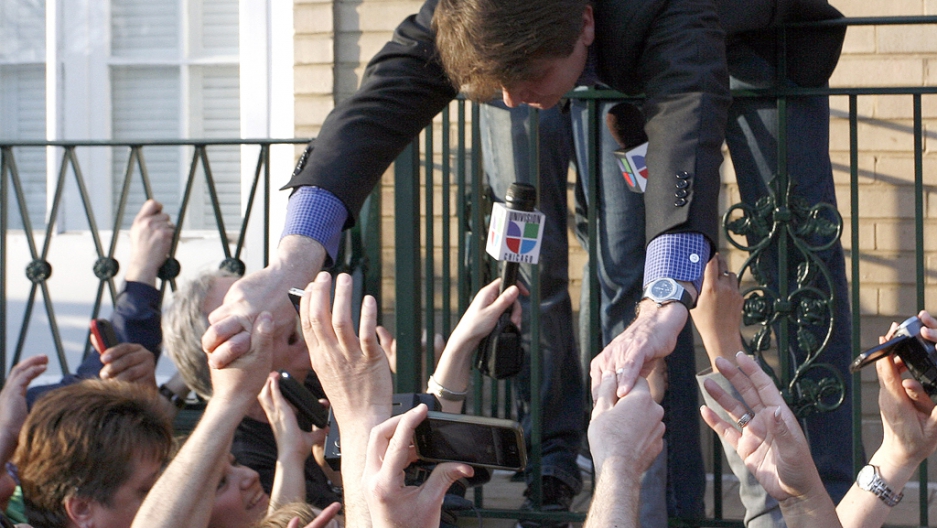 Disgraced former Illinois Governor Rod Blagojevich shakes hands with supporters after giving a news conference outside his home March 14, 2012 in Chicago. Blagojevich must report to a federal prison in Colorado by tomorrow, to start serving a 14-year term he received for his conviction on numerous counts of fraud and corruption including attempting to sell the vacant U.S. Senate seat held by then Senator Barack Obama.
Credit: Frank Polich
Share

LOS ANGELES — New Jersey is the least corrupt state in America, a new report by the Center for Public Integrity released Monday has found.

According to the State Integrity Investigation, which graded all 50 states on accountability and corruption, the United States isn't doing too well in terms of running honest governments. Not a single state was awarded an A grade, and only five got a B: New Jersey, Connecticut, Washington, California and Nebraska, Slate Magazine reported.

New Jersey got the highest score with a B+.

"I'm still in shock," New Jersey's senate majority leader, Democrat Lorretta Weinberg, told the Integrity Investigation. “If we’re number one, I feel bad for the rest of the states.”

More from GlobalPost: Opinion: What really causes US electoral corruption

While New Jersey’s rating may seem counterintuitive — Weinberg told the Center that she'd served with three state senators who either are in prison or were recently released from jail — the report is not a test of the ethical strength of politicians, but rather the structure that governs the government, such as the laws on the books and the actions that enforce those laws, according to the Integrity Investigation.

New Jersey's imprisonment of state employees shows that its laws are strong and rigorously enforced, according to the report, and New Jersey and Louisiana (which also did relatively well in the report despite a reputation for political scandal) both boast some of the country's toughest ethics laws, Slate reported.

On the opposite end of the spectrum is Georgia, which ranked last in the survey, ABC News reported. From 2007 to 2008, over 650 Georgia officials “accepted sports tickets, speaking fees, fancy meals and other gratuities,” according to the study, but despite having extensive laws in place to prevent such donations, the state has not fined a vendor for failing to disclose such gifts in 10 years.

More from GlobalPost: America’s most miserable city: Miami, according to Forbes ranking

The 18-month State Integrity project, conducted by the Center in conjunction with Global Integrity and Public Radio International, is the most comprehensive study of state laws and practices that encourage openness and fight corruption, the study's investigators told Reuters.

The Washington-based non profit analyzed 16,000 data points related to state's public ethics laws, and hired reporters to support its findings with “more than 100,000 words” of anecdotal journalism, according to Bloomberg Businessweek.

“The risk of corruption remains high in every state capital, but the way we look at it, a scandal that gets exposed and prosecuted may be a sign that things are working right,” Nathaniel Heller, executive director of Global Integrity, told Bloomberg.