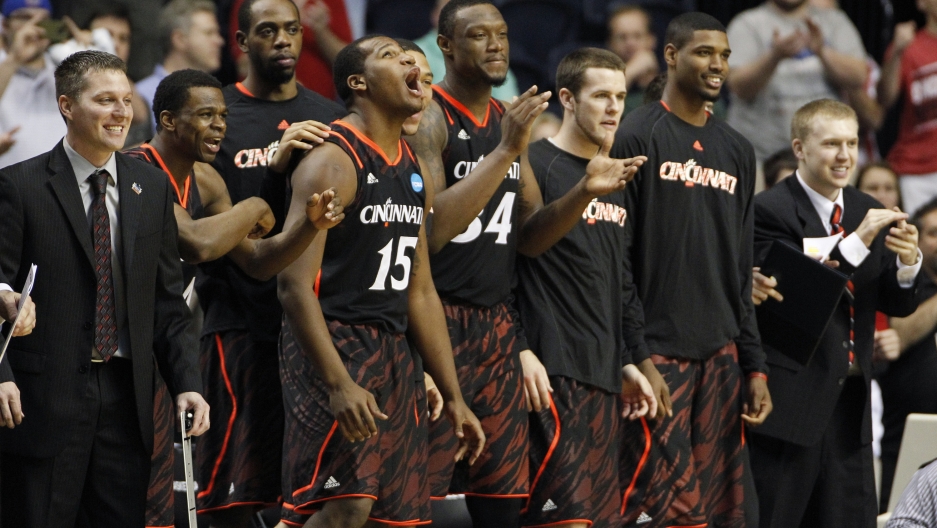 The Cincinnati Bearcats bench watches the final seconds as they defeat the Florida State Seminoles during their men's NCAA basketball game on Sunday, March 18, 2012. (Photo by Harrison McClary/Reuters.)

With the first week of the NCAA Men's Basketball Tournament in the books, the Midwest is the biggest winner.

Not a single team west of Kansas and Baylor (in Waco, Texas) had advanced to the Sweet 16. And in the northeast, only Syracuse is still alive, while North Carolina, North Carolina State and Florida represent the southeast. But in Ohio alone, Cincinnati, Xavier, Ohio and Ohio State are all still playing. Other Midwest schools still playing include Kentucky, Louisville, Indiana, Wisconsin, Marquette and Michigan State.

Ohio, though, certainly stands out. It's the first state to send four teams to the Sweet Sixteen.

"Ohio is really representing hard," said Ibrahim Abdul-Matin, Takeaway sports contributor. "It's not just that they're all in Ohio. They're actually relatively close to each other. Louisville is actually relatively close as well. In the middle of the country, the heart of the country, you have the heart of basketball. It's really almost poetic in the way this is playing out."

Because of match-ups, at least one team, Cincinnati or Ohio State, is guaranteed to make it to the Elite Eight.

"Cincinnati's playing unbelievable basketball," Abdul-Matin said. "They played last night and beat Florida State. Both of those teams were playing at a very, very high level ... All of the teams that are playing right now are playing extremely well. I think Cincinnati is the best team of this group. Obviously Ohio State is playing well, but I like Cincinnati's chances."

It's also been a tournament for top seeds. While two seeds Missouri and Duke both lost in the first round, 11 of the 16 Sweet Sixteen teams are teams that, based on seed, should be playing in the regional finals next weekend.

Abdul-Matin pointed out there were some Cinderella stories coming out of the Round of 64, but by the time the weekend was over, most of those teams have been swept out as well.

"Order was re-established in college basketball," he said. "What you're seeing across the board is lower seeds are beating the higher seeds. Lower seeds are the teams that have had better records, have played against better teams, presumably."

But the battles are getting tighter. Take Kansas-Purdue which ended late Sunday night. The Jayhawks of Kansas eked out a three-point victory despite trailing for most of the game.

"It's definitely going to make for very compelling games and a lot of great ratings to watch it," Abdul-Matin said.